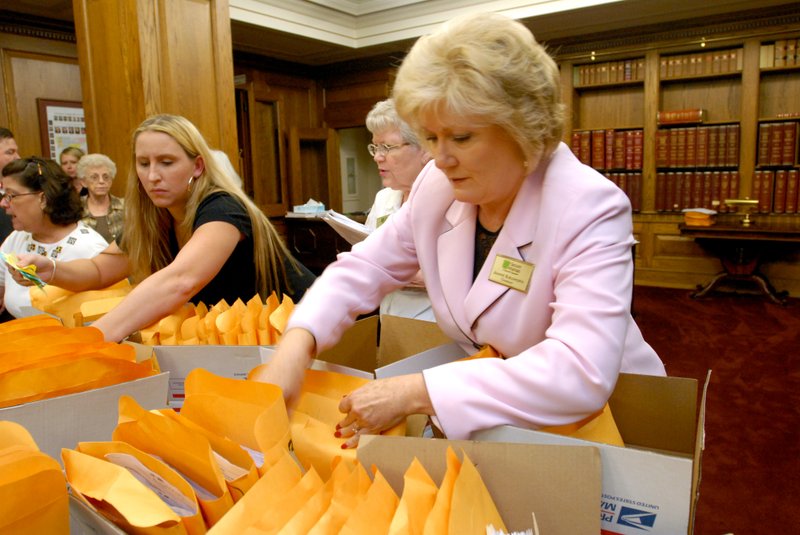 Jeannie Burlsworth (at right) and Brean Schoultz, both with Secure Arkansas, sort through boxes of signed petitions on Friday, July 2, 2010, at the Secretary of State's office.

LITTLE ROCK — A group aiming to deny government benefits to illegal aliens turned in its petition slate Friday in an attempt to get its proposed constitutional amendment on the Nov. 2 general election ballot in Arkansas.

Jeannie Burlsworth, president of Secure Arkansas, said she might be short of the 77,468 signatures from registered voters in Arkansas the state requires.

That means nearly 100 percent of the submitted signatures would have to be found valid for the secretary of state to place the measure on the ballot.

But state law allows petitioners who turn in signatures on time to be given another 30 days to seek more signers.

“That’s what we’re counting on,” Burlsworth said. “That’s why we’ve got people who are going to continue during Fourth of July parades, gathering signatures.”

Additionally, she said, “a guy in Jonesboro” collecting signatures wasn’t able to make it to Little Rock on Friday to turn them in.

Secure Arkansas was the only group pushing a ballot initiative to turn in signatures by the deadline.

Nothing was given to the secretary of state’s office from a group proposing an amendment to allow a Texas promoter to have casinos in seven Arkansas counties. A group that wanted to revamp the state’s tax system gave upits effort weeks ago and said it will try again in the future.

The Rev. Steven Copley of North Little Rock, a leader in the Arkansas Friendship Coalition, which was formed with a goal of fighting discrimination against illegal aliens, said his group will oppose Secure Arkansas’ efforts.

“We feel like that the whole issue of immigration reform is a federal issue and it really doesn’t need to be filed state by state,” Copley said in an interview. “It’s going to end up, like most states, in some kind of litigation. It really needs to be handled by the U.S. Congress.”

The state constitution requires petitions for constitutional amendments for the Nov. 2 election to be submitted four months before the election.

Burlsworth of Bryant and about a dozen Secure Arkansas supporters showed up at the Capitol about 4 p.m. Friday. The secretary of state’s office said it would accept signatures up until 4:30 p.m., which is the close of business for the day, a deadline that a lawyer in the office said has never been tested in court.

Burlsworth stood in the first-floor entrance to the Capitol talking on her cell phone, trying to determine her next step. She and others were considering whether to have a news conference before turning in signatures, but they finally agreed to skip it as the deadline approached.

One by one, supporters each carried a box of signatures into a basement office where the elections division of the secretary of state’s office is located.

“Sorry to keep you working on a Fourth of July weekend,” Burlsworth told one worker.

Secure Arkansas and secretary of state’s employees rifled through the petition boxes for about a half-hour to determine which counties the signatures came from.

Arkansas law requires that a proposed constitutional amendment have signatures from a number equal to 10 percent of registered voters in the previous race for governor. In this case, that amounts to 77,468.

The law also requires that 15 counties each must supply a number of signatures equal to 5 percent of the voters in the previous race for governor, said secretary of state’s spokesman Sandra McGrew. The county requirement is meant to demonstrate that groups have support outside one geographical area, she said.

Burlsworth said Benton County yielded many signatures, from about 18 percent of the registered voters there.

“This is just federal law reinstated,” Burlsworth said of her proposal. “If you are here illegally, you are not eligible for the benefits. This is what the whole nation is saying they don’t want to happen. They want our borders secure and our state secure and they want our taxpayers guarded.”

She said the signatures were collected by “hundreds” of volunteers.

Among other things, the self-described grass-roots group’s proposal would require state agencies, counties, cities and other local units of government to verify the lawful presence in the United States of any person 14 years old or older who applies for certain federal, state or local public benefits.

The measure would require each state agency and political subdivision to document the types and dollar amounts of benefits provided to illegal aliens and to file annual reports with the General Assembly.

What, if anything, to do about illegal aliens in Arkansas has been a contentious issue in recent years. The state’s Hispanic population jumped to 5.6 percent of the overall population in 2008.

There have been flaps in Arkansas on the immigration issues at the Legislature since 2005 when former Gov. Mike Huckabee advocated giving illegal aliens access to instate college-tuition rates and state-funded college scholarships.

In 2007, state agencies in Arkansas reported that education and imprisonment expenses totaled about $169 million, including costs of services to illegal aliens and legal immigrants.

A study released in April by the Urban Institute, funded by Arkansas’ Winthrop Rockefeller Foundation, reported that immigrants and their children have a small but positive net fiscal impact on the state budget. The study found that the state spent $237 million in 2004 on education, health services and corrections for immigrants but took in $257 million in tax revenue from the same population.

It reported that immigrants directly and indirectly generate almost $3 billion a year in business revenue. It also noted that among the state’s estimated foreign born population of 101,000, half are here illegally.

Two years ago, Secure Arkansas fell short of its goal of getting its proposed initiated act on the ballot to keep illegal aliens from receiving certain state services.

McGrew said the secretary of state’s office has 30 days from Friday to verify the signatures are from registered voters. If, after that, it is determined Secure Arkansas is short, the 30-day period to collect more signatures begins.

Gov. Mike Beebe, a Democrat, has said he opposes the measure because Congress should deal with immigration, it duplicates laws already in place and it would create a costly tracking system.

Jim Keet, the Republican nominee for governor, has said he supports it. The GOP candidate for lieutenant governor, Mark Darr, praised Secure Arkansas on Friday for its petition drive.

The Legislature already has referred to the voters in November three proposed constitutional amendments:

One to create a constitutional right to hunt and fish.

One to allow the Legislature to establish criteria for authorizing bonds for economic-development projects.

One to remove interest rate restrictions for government-issued bonds and commercial loans.