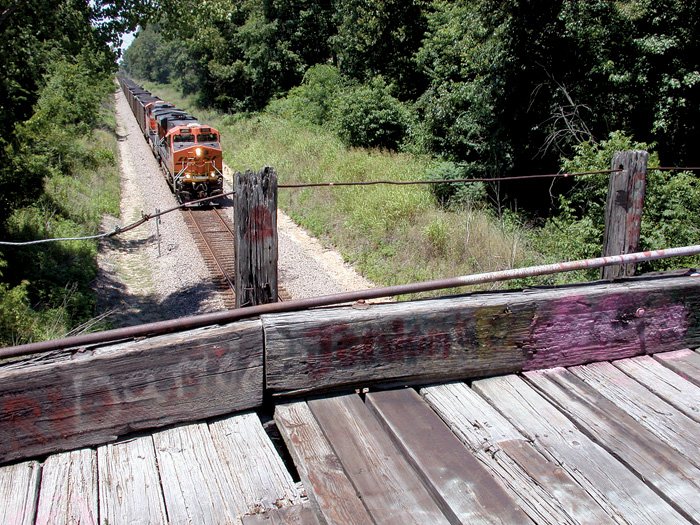 BONO — An old, rural wooden bridge that served as a hangout and a launching spot for many a romance faces an uncertain future unless residents in this small Craighead County town can save it.

The bridge, which crosses over Burlington Northern Santa Fe railroad tracks, was built in 1882 and replaced in1927 after a fire. The county closed the bridge earlier this year when two vehicles drove off it and plunged down an embankment.

County officials fear that the bridge, which is owned by the railroad, is too dangerous to keep open. They have discussed closing it permanently, tearing it down or shoring it up.

The 100-foot-long span is made of crisscrossing timbers. The roadway consists of wooden planks. The bridge’s railings have long since been replaced with posts and steel cable.

“The bridge is not structurally sound enough for auto traffic,” said Joe Faust, a spokesman for the railroad company. “It’s nostalgic, certainly. But it has caused challenges.

“The best option is to do what’s the best for the safety of the community.”

Steve Cline is leading an effort to save the bridge. He will meet with railroad and Craighead County officials later this month in Jonesboro to discuss restoring the bridge, he said.

“It’s a novel thing,” he said. “Everyone has heard about it.”

More than 1,300 people signed a petition asking that either the railroad company repair the bridge or the county take it over and make its own repairs with historical-grant money.

Claudia Shannon, a Jonesboro interior designer who owns a farm near the bridge, said that if the county retains possession, she will try to place the bridge on the National Register of Historic Places.

“This draws so much more than downtown Bono does,” Shannon said. “Adults who used to go there are bringing their children there now. It has generational interest.”

Kids, teenagers, college students - even adults - would use the bridge as a meeting place, dangling their feet off the suspension and waiting for trains to pass below. The train would rush underneath, the noise of its engines enhanced by the bluffs on either side of the tracks.

The bridge would sway, and first-time visitors would often scamper off the bridge in fear.

“It was the place to go in Bono,” said Sharon Harvey of Lenoir City, Tenn. “It’s a landmark. We grew up on that bridge.”

Harvey, 45, who grew up in Craighead County and went to school in Bono and later the Westside Consolidated School District, received her first kiss on the bridge when she was 14 on the night of the Bono school’s junior and senior prom in 1978.

“Guys wanted to scare girls,” she said. “They’d take us there at night and we’d walk to the top of the bridge. Pretty soon, you’d hear the train horn and see the light coming. It was spooky.”

The first kiss worked - for a while, anyway. Harvey married the fellow who planted her first smooch, but the two later divorced.

Kimberly Dotson’s father took her to the bridge when she was 4 years old, she said.

Now, Dotson’s husband takes her children to the crossing.

Cline lives on the north side of the bridge, about a quarter mile from his father, who lives on the south side.

With the bridge closed, Cline must drive four to five miles to cross the tracks at Hasbrook Road before visiting his father.

“It’s a way to cross,” he said. “It doesn’t matter if it’s a four lane or a one lane bridge. We need it. You don’t see many bridges like that.”

A Facebook page titled “Save the Bono Bridge” has more than 1,100 members. Many have shared their memories of the bridge on the website.

Despite the sentiments, county officials worry about the liability involved in taking over the upkeep of the bridge.

“There’s a lot of maintenance and a lot of upkeep involved,” said L.M. Duncan, Craighead County Road Department supervisor. “I don’t think the county would want to take that on.

“The best end result, I think, is if the railroad fixes it back up and opens it again,” he said.

Cline will meet with Duncan, County Judge Dale Haas and representatives of the Burlington Northern Santa Fe railroad on July 26 to discuss the bridge’s future.