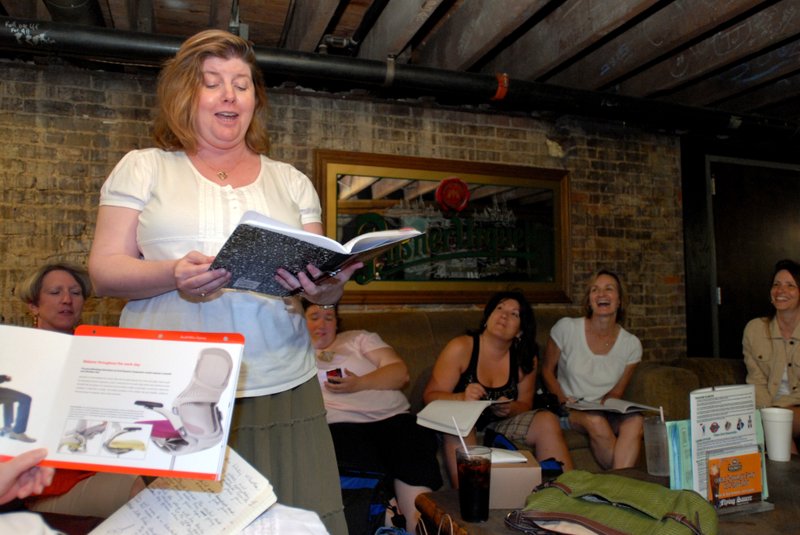 LITTLE ROCK — When Illene Stewart walked into a used bookstore in Little Rock’s River Market District, she wondered about the authors whose works ended up on the shop’s shelves.

“How many authors are deceased? How many are still alive?” she wrote in an essay penned in a composition book she toted throughout the district on a sunny day last week.

When Eulea Kiraly entered the same bookstore, she left with a haiku, a Japanese poem of three unrhymed lines: On a shelf in a bookstore: Inspiration, as if you can buy it.

Inspiration wasn’t for sale. But Kiraly and 11 other University of Central Arkansas graduate students found it was readily available for free in the River Market area, where they participated in a day-long writing marathon as part of the four-week Great Bear Writing Project.

The project is one of 200university-based National Writing Project sites aimed at introducing teachers in all subject areas and at all grade levels to strategies they can use to help their pupils write well.

Divided into groups, the graduate students - including Kiraly, an English teacher in the Drew Center School District near Monticello, and Stewart, a counselor in the Batesville School District - were free to roam the area and scribble their thoughts.

They ambled along the banks of the Arkansas River, where birds chirped and children played in the bookstore, in nearby art galleries and a piano bar, even in the Peabody Little Rock hotel lobby, where ducks waddle daily down a crimson carpet to a marble fountain.

That afternoon, they and the UCA project’s director, associate writing professor Stephanie M. Vanderslice, gathered in a restaurant’s rustic basement to read aloud their creations - essays, poems, memoirs, the beginnings of short stories or novels, even a restaurant review.

Joining them were three co-directors, including Monda Fason, a writing instructor at UCA, and others.

Emily M. Abram, a fourth-grade teacher in Conway, opened the read-around last week with a poem she wrote that day and told the group what had inspired her.

“I took a streetcar ride. It was like Disney World,” she said.

Her poem spoke of “bright eyes,” “rumbles, shakes and horns,” “undiscovered treasures,” “moments in time hidden” and awakening her “love for the city.”

Bri Spicer, a UCA alumna who teaches writing as part of her graduate studies in Virginia, penned more somber words after she viewed an exhibition of photographs of Arkansas National Guardsmen who had fought in the Korean War.

“His face was still young, but that darkness was there,”Spicer wrote. “They weren’t men yet, and they were already looking” through binoculars “down the barrel of a gun.”

“I want to be the duck master. What a job!” wrote Kelly Wolfe, a Sheridan band director who stopped by the Peabody and saw its duckmaster, who wears a scarlet and gold-trimmed jacket as he directs the birds to a pond with a brass head duck cane.

“And when ducks talk back, it’s just cute,” Wolfe wrote.

Vanderslice offered her own humorous memoir after she and Fason stopped by a nearby furniture store.

“Monda and I just found heaven in a chair,” she wrote. But in this case, heaven came with a $600 price tag, she added.

“I could sit in this chair for the rest of my life,” she wrote. “There are three things that matter in life, the saleswoman told us, your shoes, your chair and your bed.”

Vanderslice and Fason said the leisurely marathon was about giving the students “permission” to write freely all day.

“A good part of our society says only certain people can be writers,” Vanderslice said. “Everybody else is just pretenders.”

By the end of the annual writing project, she said, participants realize they, too, can write.

“And if they can do it, they can give that experience to their students,” she said.