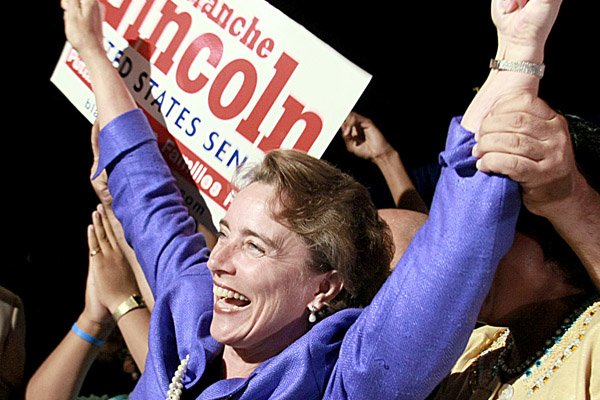 In Tuesday’s primary runoff, Lincoln held off Lt. Gov. Bill Halter - 52 percent to 48 percent in unofficial returns - despite some pundits predicting that she would lose in the face of opposition from unions and liberal groups backing the challenger.

“People threw everything at her, and she fought back,” said former Chairman Vaughn McQuary of Little Rock. “In the end, people know Blanche better than they know Bill Halter. That may have been the deciding factor.”

Tuesday’s vote sets up a Nov. 2general election between Lincoln of Little Rock and U.S. Rep. John Boozman of Rogers, the Republican nominee.

Lincoln said her victory in the primary demonstrates her willingness to do what’s right for Arkansas.

“I think the true heart and spirit of the people of Arkansas shone out,” Lincoln said. “They understand and know that they are independent enough to make up their own minds when special interest groups come in with a lot of negativity. I look at everything we do as an effort to come together.”

Lincoln spoke Wednesday in a telephone interview after flying to Washington, D.C., for Senate business. Her voice was raspy from giving speeches and greeting supporters during the previous night’s celebration.

Halter didn’t speak to the news media Wednesday, but his campaign announced that he would wave to motorists at a busy intersection in North Little Rock to thank people for their support.

Lincoln said Halter called her Tuesday night to say, “It looks like you won.”

Some counties switched from Lincoln to Halter, including Ashley, Fulton and Carroll.

Boozman said he’s “going to be working very, very hard.” He plans to campaign in Little Rock this weekend.

What does he think of Lincoln?

He said he plans to make the case that Lincoln’s views aren’t aligned with what Arkansans think.

He said she didn’t show herself to be a moderate by beating Halter.

“It’s a matter of degree,” he said. “It was a battle between the left and far left.”

Lincoln received a congratulatory phone call from Obama on Wednesday. She said she appreciates his call and will gladly accept his support just as she will anyone’s.

“I told him that we needed to get down to business and that the people are frustrated,” she said. “He was very receptive and supportive.”

She emphasized that she will disagree with Obama if necessary.

On health care, Lincoln said, “I wasn’t the deciding vote. I was among a handful of five Democrats that worked on getting consensus. When the administration takes a position on something that I don’t feel like is in the best interest of Arkansas, I’m going to stand up and voice concerns.”

She said she continues to call for a “reasonable and moderate” estate tax and opposes the Environmental Protection Agency’s plan to regulate greenhouse gases.

What does she think of Boozman?

“John is a nice guy, and I’ve worked with him in the delegation,” Lincoln said.

She touted her position as chairman of the Senate Agriculture Committee.

“I’ve worked hard to get into places helpful and useful,” she said. “I’ve demonstrated a willingness to find common ground. If you look at the congressman’s record, and I have not researched it thoroughly, but a majority of it is pretty much, you know ... pretty hook line and sinker with the Republican caucus.”

At times, the Halter-Lincoln race got testy, some would say even nasty.

“We will defend ourselves and counter-punch,” Boozman said. “Sen. Lincoln is a friend. We’ve worked together closely. I don’t envision any problems.”

He said he’s “committed to running on issues” such as cutting taxes and passing a balanced-budget amendment.

Boozman credited Lincoln’s win to her ability to “rally her base.”

Some in the national news media seemed to expect Lincoln to lose Tuesday’s runoff.

An article in the Washington Post on Tuesday said Lincoln “committed a series of blunders,” including her “first mistake” when she announced last year that she wouldn’t support a bill to make it easier to unionize workplaces. That led to unions, which had previously supported her, turning against her.

The article said she had “self-inflicted ... wounds” and “missteps,” including calling for a lower estate tax and opposing a public option for health care after initially favoring it.

Former state Rep. Janet Johnson, D-Bryant, who previously represented Saline County, one of the counties that switched from Halter to Lincoln, credited former President Bill Clinton’s help as being key for Lincoln.

And, partly because of Clinton, she said, more Halter voters from May 18 “may have had second thoughts about not supporting” Lincoln and stayed home Tuesday.

Alan Hughes, president of the Arkansas AFL-CIO, which joined other unions in supporting Halter, also cited Clinton’s visit May 28 in Little Rock for Lincoln.

“She had to bring Clinton in to pull it off,” he said.

He also said that a reduced number of polling places in Garland and Miller counties may have led to some Halter voters not bothering to vote.

Hughes said labor has no plans to rebuild its relationship with Lincoln and will be open to endorsing Boozman or Lincoln during its convention in August in Hot Springs.

“Sen. Lincoln needs to come to us,” he said.

Hughes said unions haven’t lost clout as a result of Lincoln’s victory and that candidates are still seeking labor’s support.

Lincoln said she’s made no plans to meet with labor representatives and noted that she’s voted for their issues 82percent of the time.

“If there is support they want to send my way, I’ll be glad to have it,” she said.

The Democratic primary race was expensive.

Through May 19, Lincoln spent $7.3 million to Halter’s $2.9 million. Unions and liberal groups spent millions more on Halter’s behalf, and business interests spent money for Lincoln. That’s money Lincoln wasn’t able to save for the general election, but she said the race with Halter was a good thing.

“I’ve enjoyed the primary and runoff,” she said. “We’ve re-focused ourselves. Engagement [in politics by the public] is always helpful in my opinion, and that’s what I think this job is about.”