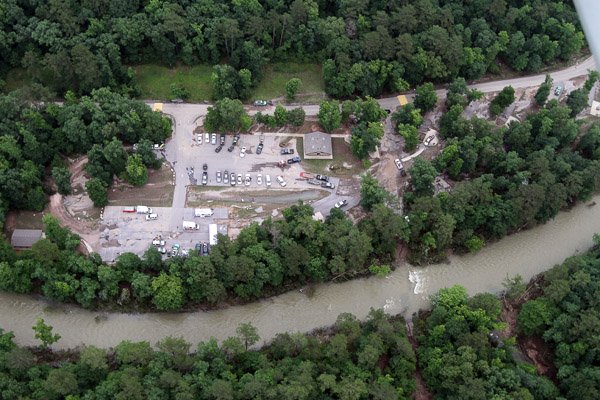 LANGLEY — A 17th body has been found as teams continue searching Saturday for people swept away by flash floods at a southwest Arkansas campground.

The latest victim, who has already been identified, was found Saturday morning just south of the Albert Pike Recreation Area campgrounds, Arkansas State Police Capt. Mike Fletcher said. Authorities have not released the identity of any of the victims.

Multiple teams went into the Albert Pike Recreation Area at daylight Saturday and additional crews were expected to boat up and down the Little Missouri River from entry points at the campground itself, Highway 70 and Highway 84.

In an 11 a.m. briefing, Capt. Fletcher said they still had 20 miles of river and rugged terrain to cover and that the search will continue for as long as it takes. Crews are searching by boat, kayaks, canoes, horseback and foot.

No survivors have been located Saturday, but Fletcher said the mission is still a rescue effort and not solely a recovery.

As of Saturday morning, authorities had identified all but one of the bodies that have been recovered. The identities of the victims are expected to be released after their families have been notified.

Another police briefing is planned for 4 p.m. Saturday.

The campers were swept away when heavy rains caused a 20-foot surge in the Little Missouri river over just four hours early Friday morning. The strong currents destroyed cabins, overturned trailers, ripped pavement from the ground and even lifted and washed a full-size gravel truck into a wooded ditch.

At least two dozen people were hospitalized. Authorities had rescued dozens more before suspending their search at nightfall Friday.

In addition to numerous searchers from state police and forestry agencies, volunteers from across and even outside the state have gathered at the command post hoping to help.

One man from Little Rock brought his boat thinking he may be able to provide transportation for rescuers searching the river. A team of EMTs from Foreman, Ark., drove more than an hour to be here at 5 a.m. with no guarantee they will be allowed to join in the efforts.

A family from Foreman was among those camping when the fast-rising waters swept away campers, they said. The husband was found with minor injuries but the wife and child are among the missing.

"You just want to do all you can to help," 4-year Foreman volunteer Amanda Anderson said, explaining news of the family's plight had quickly made its way across the 1,500-person town in Little River County. "It'd mean a lot (to help search)."

Sen. Blanche Lincoln, Agriculture Secretary Tom Vilsack and U.S. Forest Service Chief Tom Tidwell were taken on a tour of the area and were expected to address the media later Saturday. President Obama called Gov. Beebe to offer his condolences and federal assistance.

Officials say the search for the missing could take days, if not weeks.