‘Training kicked in’ for run at killers 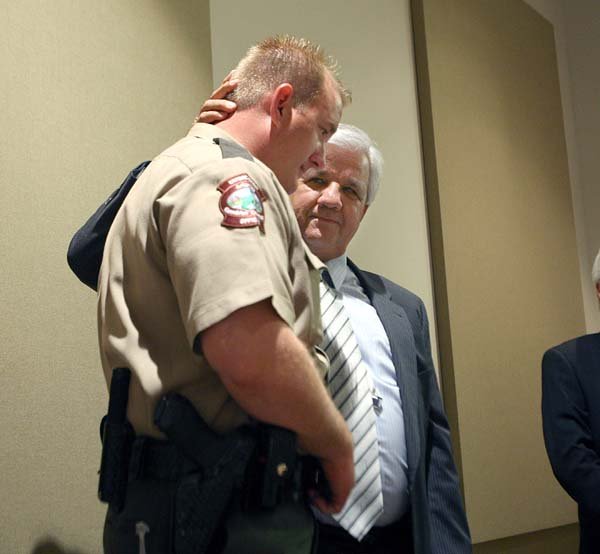 LITTLE ROCK — When the “officers down” call went over the radio, Arkansas Game and Fish officer Michael K. Neal stopped his truck, put on his body armor, strapped his assault rifle to his chest and sped toward West Memphis to join the hunt for the assailants.

By day’s end, the northeast Arkansas city was grieving over the deaths of two policemen; a sheriff and his chief deputy were in the hospital; and the assailants - a father and his teenage son - were dead.

Neal, 33, had shrapnel in his back, glass in his face and eye, and the eternal gratitude of other lawmen who credit him with saving their lives and preventing further bloodshed.

On Thursday, Neal received accolades for his May 20 actions, and Gov. Mike Beebe presented him with a medal of valor during a meeting of the Game and Fish Commission in Little Rock.

Police say Jerry Kane, 45, and Joseph Kane, 16, of Forest, Ohio, killed West Memphis police Sgt. Brandon Paudert and officer Bill Evans during a traffic stop on the morning of May 20.

The Kanes then drove their minivan into a Wal-Mart parking lot where they were later spotted by Crittenden County Sheriff Dick Busby and Chief Deputy W.A. Wren. The Kanes opened fire on the two officers, who had gotten out of their vehicle to investigate.

With Busby and Wren under fire and wounded, Neal rammed his pickup into the Kanes’ minivan.

The assailants then turned their attention and their weapons on Neal.

One of them sprayed the front of his truck and windshield with bullets from an AK-47, Game and Fish Col. Mike Knoedl said, prompting Neal to return fire, a step that was fundamental in “ending this shooting spree and attack on law enforcement.”

Ultimately, Neal was one of 13 officers from multiple agencies who shot at the Kanes, and it isn’t known whose bullets struck and killed them because the investigation is not complete, a prosecutor said.

“At this time, we see no indication it’s anything other than justified shooting,” said Scott Ellington, a deputy prosecutor in the 2nd Judicial District.

“All you have to do is look at that picture,” the governor said, referring to an image of Neal’s bullet-riddled truck that was projected on a screen in the commission’s auditorium. “That’s the fire he was taking.”

Neal, a father of three and the son of a coroner, was on duty in Lee County when he heard the radio traffic. He talked to his sergeant, then warned his wife that he was joining the cavalry two counties over.

Neal said fighting fires in Brinkley, patrolling the roads of Monroe County as a part time deputy and cracking down on deer poachers and night hunters for the past three years had helped prepare him for what he did that day.

The expert marksman did exactly what he was taught to do in such a situation - fire through the windshield from the inside of his truck.

“My training kicked in, and I went into action,” he said.

West Memphis Police Chief Bob Paudert, the father of Brandon Paudert, was among several east Arkansas law enforcement officers and government officials who expressed their gratitude and praise for Neal at Thursday’s presentation.

Bob Paudert said he was touched that after his son’s death, Neal had visited his home. The police chief remarked Thursday on Neal’s humble and soft demeanor.

“You can be gentle and take care of business, too,” Bob Paudert said in an interview.

Busby wanted to attend the ceremony, a sheriff’s deputy told the packed commission room, but he was in rehabilitation for his injuries. Wren is still in serious condition at the Regional Medical Center in Memphis.

West Memphis detective Jimmy Evans, the brother of Bill Evans, was at the ceremony in uniform, with a black bar still across his badge, a sign of respect for a fallen officer.

Wet-eyed and red-faced, the detective presented Neal with a pin that his slain brother had earned for his work on the special-weapons-and-tactics team.

Neither of the Evanses knew Neal before May 20.

“Never heard of him before,” Jimmy Evans said, his voice choked with emotion. “But I won’t ever forget him.”

“He’s what an off icer should be.”

Print Headline: ‘Training kicked in’ for run at killers