On a new note 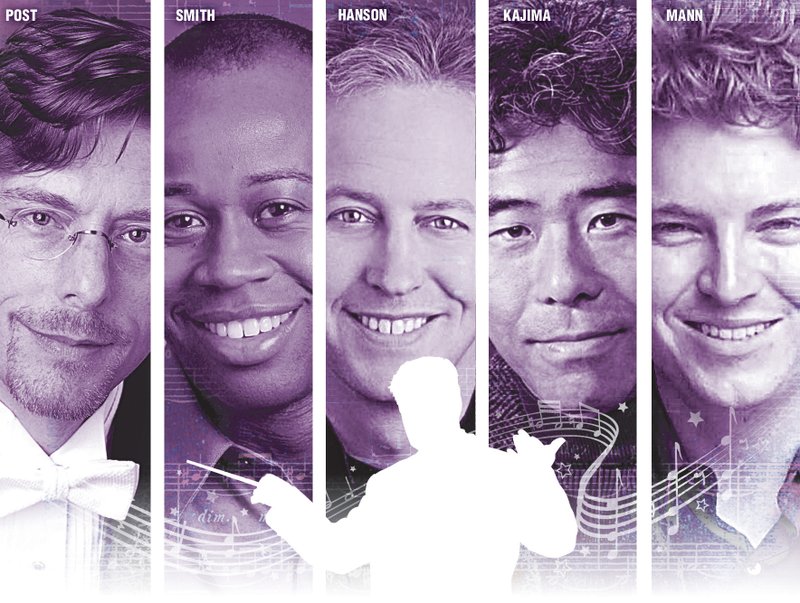 LITTLE ROCK — The Arkansas Symphony Orchestra will have a new music director when it opens its 2010-11 season the first weekend in October at Little Rock’s Robinson Center Music Hall.

What the orchestra’s musicians, who will be working with him; its patrons and sponsors, who will support him; and its audiences, who will be watching him on the podium, still don’t know yet is that person’s name.

The most recent stage of the conductor search ended with the pair of Stella Boyle Smith Masterworks concerts Feb. 27-28, with Andre Raphel Smith, music director of the Wheeling (W.Va.) Symphony Orchestra, the last of the five finalists, on the podium.

The search began after Music Director David Itkin announcedin April 2008 that he had taken a teaching job at the University of North Texas in Denton and would be leaving the orchestra at the end of the 2009-10 season, after 16 years on the podium.

(Itkin has continued to conduct orchestras in Las Vegas and Abilene, Texas.)

Former board presidents Lee Ronnel and George Mitchell, veterans of the 1992-93 conductor search that resulted in Itkin’s hiring, have been heading an 11-member search committee, consisting of eight board members, two orchestra musicians and the orchestra’s executive director.

The committee winnowed down 175 applicants to 12 semifinalists and five finalists. Each finalist “auditioned” by conducting the orchestra in a pair of Masterworks concerts.

The committee, with Christina Littlejohn, who replaced Galen Wixson as executive director in June 2009, met March 4 and made aunanimous recommendation to the orchestra’s board of directors.

The full board was to meet Thursday to vote on the recommendation and Littlejohn said last week she expected the board to go along.

With board approval in her pocket, Littlejohn will be able to start negotiating a contract with the conductor-designate and/or his agent.

“These negotiations can take forever,” she says. “It can feel like a million years.” The choice won’t be final until that contract is signed, Littlejohn adds.

Orchestra officials are keeping things very close to their vests and are not releasing any details.

However, based on conversations with audience and orchestra members over several months, the consensusfavorite, since very early on in the process, has been Philip Mann, assistant conductor of the San Diego Symphony, the second of the five finalists, who conducted the orchestra in October.

(Mann has a previous Arkansas connection: He was a conducting intern in 2006 at the Hot Springs Music Festival, where his wife, Tatiana Roitman Mann, was a collaborative pianist in 2005 and 2006.)

Littlejohn says it’s in the best interest of the orchestra to have a music director in place as soon as possible for several reasons, not least of which is filling out the programs for the 2010-11 season so the orchestra can get to work ordering music and determining what instrumentation and personnel will be required for which concerts.

The orchestra has already announced the bare bones of the season, including concert dates, soloists and what concertos they’ll be playing, and a few major works that the new music director will inherit, including Gustav Mahler’s Symphony No. 1, Oct. 30-31; Felix Mendelssohn’s “Reformation” Symphony, Jan. 29-30; and Modest Mussorgsky’s Pictures at an Exhibition for the April 16-17 season finale.

If negotiations go well and quickly, the orchestra could announce the name of its new music director by April 1.

If not, the announcement will have to wait at least until after Itkin’s farewell concerts April 10-11, in which he will conduct Mahler’s massive Symphony No. 2, “Resurrection.” The target date for theannouncement would then become April 15.

Henry Fogel, longtime president of the Chicago Symphony Orchestra, was making his farewell tour as outgoing president of the League of American Orchestras when he stopped at Little Rock fora site visit about the time the orchestra had completed its list of finalists.

He pronounced them all top-caliber talents and said the orchestra would be lucky to have any of them at the helm.

And after the process, says symphony board president Martin Thoma, “The response for all five candidates was by and large favorable.”

Littlejohn puts it a little more prosaically: “Nobody bombed,” she says.

On Nov. 7-8, it was the turn of George Hanson, music director and conductor of the Tucson (Ariz.) Symphony, with works by Johannes Brahms, Robert Schumann and more Beethoven. (Hanson was also a candidate for the job the last time it came open, guest-conducting Mahler and Beethoven inOctober 1992.)

After each pair of concerts, the orchestra surveyed audience members as well as musicians and patrons, assessing critical response.

“It’s been very helpful - the depth of the process, the amount of exposure to all of our stakeholders - it’s been really informative,” says Thoma. “We expect it to be very helpful in making the final, and what we hope is the best, decision.”

“We’ve heard it from the musicians in the process,” Thoma adds. “Each conductor has his own style, his own way of communicating verbally, by gestures. From each they can learn something andget better, about phrasing, listening, voicing, repertoire demands.”

The ultimate decision, Littlejohn says, is a matter of “cultural fit, and whether or not he lit up the community.”

Each candidate went through an exit interview on the Sunday afternoon following the second concert. “We needed to know if he was still interested in the orchestra and the community,” Littlejohn explains, “and to see if he had any questions for us.”

“You can tell if you like each other. ‘You’ve been here a week - do you want the job?’”

“Each [conductor] was very complimentary of our orchestra,” Thoma says. “They all commented on their musicianship, on their enthusiasm, their eagerness to engage and their attentiveness,” and, Littlejohn added, their “openness to tryingthings a new way.”

The orchestra set up as many connections as possible for each candidate during the week he was here while taking into account that he still had to have time to prepare for a concert, Thoma says.

“The playing field was quite level; their week on the ground was quite templated. All the candidates essentially experienced the same week - they met with board [members], major stakeholders, guild, musicians, staff; preconcert, concert.”

“We’re sort of looking for Superman,” Littlejohn admits. “On the one hand, he has to spend a lot of time sitting alone studying scores, and yet he has to equally enjoy party situations.”

The conductor’s performance on the podium, however important - the music the orchestra makes is, ultimately, its product - is only the tip of the iceberg when itcomes to what a music director does.

“It’s only the most visible,” Thoma says. “It also involves the ability to develop relationships, an articulate vision, philosophy, point of view, the ability to look and to listen- all these other skills that are critical, as well as his relationship with patrons and donors.”

The music director programs the music on the concerts as well as conducts it. He must take into account how many onstage musicians it will take to perform those works (which has a direct connection to the orchestra’s budget, as does the cost of purchasing or renting sheet music).

The five-year contract the new conductor will sign will pay him what former board president Michael Shelley said earlier this year would be in the “low six figures,” about what Itkin has made in the final years of his tenure.

It will also include a clause - also present in the contract that Itkin and his three predecessors signed - that he live in central Arkansas.

It is common, even usual, for most music directors to have two or more jobs (as Itkin does), and it is also common for major orchestras to have the conductor fly in the week of a concert and fly out again right afterward.

“It’s a bit of a gutsy move for a smaller orchestra like ours to have a residency requirement,” Thoma says.

Nevertheless, Littlejohn says, plans are to have a guest-conductor for one Masterworks pairing each season - though maybe not in the first season under a new music director, when it will be important for him to forge a bond with his new orchestra. And the music director will be encouraged to guest-conduct elsewhere.

“I think having a guest conductor is really important,” she says. “It helps the orchestra to develop and grow and have new experiences, and it helps the [music director] to conduct other orchestras and perform different repertoire.”

Depending, however, on the commitments the new music director may already have, there may be one or more guest conductors nextseason, she says.

The new music director will take over an orchestra in decent shape, financially and artistically, Thoma and Littlejohn say.

The orchestra, like pretty much all nonprofits, has taken a hit from the recession that forced a more than 10 percent cut in the 2010 budget, which took effect July 1, from $3.2 million to $2.8 million. The major factors: a combination of stagnant advance ticket sales (Masterworks seasonticket renewals sagged a bit after Itkin announced he would be leaving) and declining corporate contributions.

Littlejohn says, however, that the conductor search has perked up community interest and gotten people talking. And individual ticket sales actually ticked up slightly for the Masterworks concerts in which the finalists “auditioned,” although popsconcert attendance declined slightly.

“People feel like new [owners] invested in the process. It has forged social opportunities and helped the organization,” she says. “The trick will be to take that community support for our orchestra and transfer it into actual concert attendance.”

Meanwhile, Thoma says, “This is a different orchestra than it was 16 years ago.We’ve had transformational leadership - the conductor, the staff and the board.”

“It’s intriguing to be the Arkansas Symphony Orchestra,” Littlejohn says. “Our mission is not just to serve Little Rock, but [to] serve the state, to engage the state around live music and music education. That’s an opportunity for a music director.”

Thoma sees nothing but good things ahead for the orchestra, given the combination of a new executive director, a new marketing team and a new music director.

“This is a profoundly exciting opportunity for our orchestra, to bring [new] administrative and artistic leadership onboard almost at the same time,” he says.

Print Headline: On a new note