A Republican running for Congress in Arkansas is calling for “civil disobedience” to a health overhaul approved in Congress and says he’ll support the rights of anyone fined for not purchasing health insurance.

Gunner DeLay on Monday said he would push for the repeal of the health care bill that was approved in the House on Sunday. DeLay is one of eight Republicans running for a congressional seat in northwest Arkansas.

Later, Gov. Mike Beebe said he wouldn’t have supported the health care overhaul because he’s worried about the cost to the state.

Beebe, a Democrat, told reporters on Monday that the health care legislationwould add between $100 million and $200 million to the state’s annual budget starting four years from now.

Beebe said he didn’t urge the state’s congressmen to vote either way on the legislation, but had shared his concerns with them. Beebe, who was elected in 2006, is seeking a second term as the state’s governor. 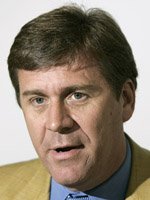 DeLay says he’ll champion the rights of anyone “threatened or fined” by the federal government for failing to purchase insurance. Under the legislation now headed to President Barack Obama, almost everyone is required to be insured or else pay a fine. There is an exemption for low-income people. The mandate takes effect in 2014.