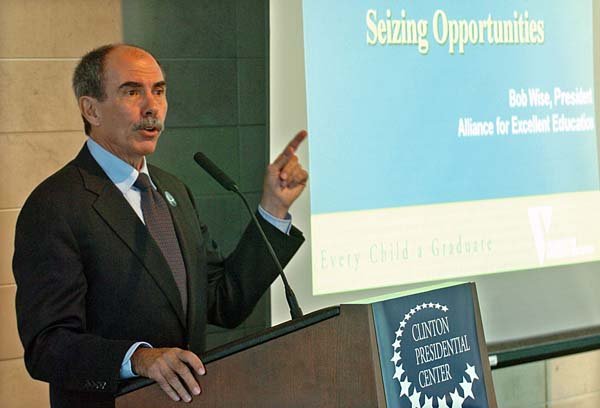 The state will lose more than $2.8 billion in lifetime earnings and $93.7 million in health-care costs from the 11,000 students who dropped out of Arkansas high schools last year alone, said Bob Wise, now president of the Washington-based nonprofit Alliance for Excellent Education.

“It’s no longer an issue of whether we want our children to succeed. We can’t make it without them,” said Wise, who spoke at the University of Arkansas Clinton School of Public Service.

The Tuesday night speech on the importance of improving kindergarten-through-12th-grade education was one of two Wise made in Little Rock on Tuesday. He spoke earlier at a forum on online education.

Wise was governor of West Virginia from 2001-2005 before joining the Alliance, a Washington, D.C.-based group that advocates for increased education funding and improvements to the nation’s high school education system.

The events were hosted by the nonprofit Arkansas Policy Foundation. At both, he emphasized the “critical” need for change. Education is at a “crossroads,” and what happens over the next several months will determine the future of education for years to come, Wise said.

Specifically, he cited states’ efforts to determine common standards for K-12 education, the need to reauthorize American Recovery and Reinvestment Act education initiatives, and revisions to the federal Elementary and Secondary Education Act, also known as No Child Left Behind.

“It’s time to change,” he said. “Today No Child Left Behind is a compact disc in an iPod world, and it’s time to upgrade.”

Recommendations to revise the Elementary and Secondary Education Act include designing a system that ensures students graduate from high school prepared to take college-level courses or to enter the work force.

There’s also a need to improve funding for education, especially at the middle and high school levels, and find ways to aid underperforming schools, Wise said. Nationwide, 48 percent of high-school dropouts are at 12 percent of high schools.

In the Little Rock metropolitan area, just cutting the dropout rate by half would have a dramatic effect, Wise said, citing estimates by the Alliance for Excellent Education. If 1,300 of the 2,600 students who dropped out in 2008 had stayed in school, they would earn a combined $13 million annually, meaning an additional $8.8 million in spending and $2.9 million in investments for the area’s economy.

At the forum on online education, Wise said America must better incorporate online learning in the classroom if the country hopes to improve its education system into the 21st century.

Education is in a “crisis,” he said. It’s a crisis that is threefold: Funding for education is declining, there’s a nationwide teacher shortage, and graduation rates are abysmal. And Internet-based learning is part of the solution.

“We have no choice but to change,” Wise said. “The traditional model for delivering education is a model that can’t be sustained in its present form.”

While state funding nationally for education increased between 2005 and 2008, it declined by about 2 percent in 2009 and by about 4 percent this year because of the recession, Wise said.

By 2013, state funding for education is projected to drop by almost 7 percent nationally, he said.

States spend an average of $10,000 nationally per pupil educating students in traditional public schools. In Wisconsin, which has a large virtual school system, the average per-pupil cost is $6,500 in the virtual system, Wise said.

“It’s very cost-effective,” he said. “And most important, you are not sacrificing quality.”

Wise said one-third of the nation’s teachers will be eligible to retire in the next five to seven years. He said 41 percent of Arkansas’ educators are age 50 or older.

Already, there’s a shortage of math and science teachers. For some rural and inner-city schools, it’s nearly impossible to recruit highly qualified teachers in these areas, he said.

In Georgia, for example, there are 440 high schools but only 88 certified physics teachers working in the state.

Virtual learning can put highly qualified teachers in every classroom, regardless of how remote the schools are.

“I asked the principal, ‘How do you teach Spanish here?’ He said, ‘I have one of the best Spanish teachers in the country. She’s in San Antonio, and she’s a native speaker,’” Wise said.

Only 50 percent of America’s college students are graduating within six years, Wise said, even though 62 percent of jobs today require some amount of postsecondary education.

Online learning can boost graduation rates by allowing students to learn more at their own pace.

Students are also more likely to be motivated to learn via technology, since so many young people are used to wielding technology outside of schools, Wise said.

“I’ve been brought into online learning because I have looked at some of these critical issues, and I’ve realized that we simply cannot do what we need to do in education without it,” he said.

Internet-based instruction is already a part of Arkansas’ educational system.

Some traditional Arkansas schools use Internet-based instruction to teach elective courses that they couldn’t otherwise offer.

The Arkansas Virtual Academy, a public online charter school, also allows about 500 kindergarten through-eighth-grade students to take classes over the Internet out of their homes.