Elliott scores a 2nd round against Wills 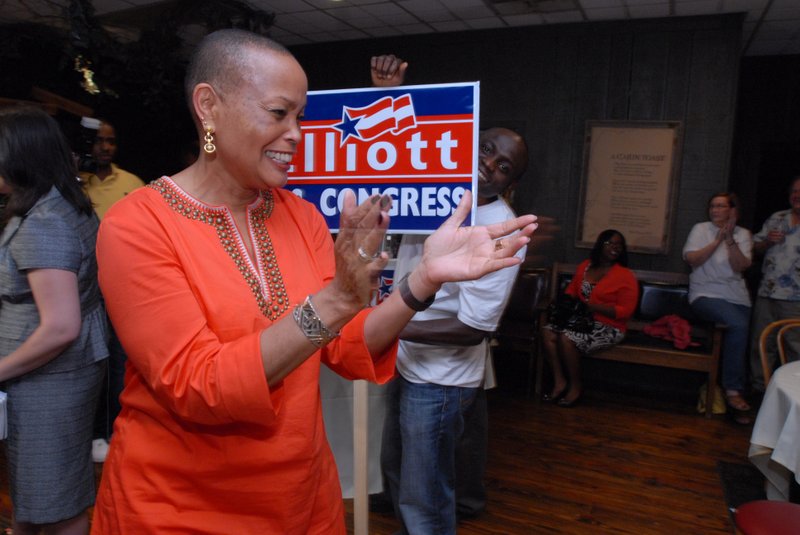 Joyce Elliott celebrates her results on Tuesday night at her watch party at Cajun's Wharf.

The also-rans were David Boling of Little Rock,former chief of staff for Snyder; Patrick Kennedy of Little Rock, a former employee at the University of Arkansas Clinton School of Public Service; and Assistant Attorney General John Adams of Little Rock.

The winner of the runoff will face the Republican nominee, lawyer Tim Griffin, in the Nov. 2 general election.

With 444 of 444 precincts reporting, the unofficial results from the primary were:

With more than 75 supporters at Cajun’s Wharf restaurant in Little Rock, Elliott said she felt encouraged.

“This is the way you want to start,” she said. “I’m a bit surprised. I know we worked really hard. ... We already had plans for tomorrow.”

Elliott, who is black, said she believes she can win the runoff. Arkansas has not elected a black to Congress at least since the 1870s.

“I don’t think the issueswill change,” she said.

The outcome of the runoff will depend on which candidate does a better job of getting his supporters to vote, she said, because it’s more difficult to get people to vote in a runoff. A second aspect is working to get the support of candidates who didn’t make the runoff, she said.

More than 50 people were at Wills’ headquarters north of the state Capitol on Tuesday night. The mood was subdued.

Wills said he expected a tough primary campaign and he knows that Elliott is popular in Pulaski County.

“Just to be in a runoff is a win for us,” Wills said. He said it will be important to get his supporters to vote in the runoff, appeal to voters who cast ballots for other candidates, and focus on communicating his campaign theme of working to get the economy back on track, he said.

“We think very strongly we give our party the best chance of winning in November,” he said.

Boling was disappointed but he thought “we ran a very good campaign.”

“This was my first campaign,” he said. “It was one of the best experiences of my career.”

Kennedy said his campaign had a serious disadvantage, raising the least amount of money among the five Democrats.

Adams, Boling and Kennedy said they haven’t decided whom they’ll support in the runoff.

The Democrats scrambled to get their campaigns going in the weeks after the seventerm Snyder announced on Jan. 15 that he wouldn’t seek re-election so he could spend more time with his wife and four young children.

The candidates said creating jobs would be their top priority.

Each wanted to cut the federal deficit.

Wills, an attorney, has been in the state House of Representatives since 2005, serving as its leader since 2009. He said he ran for Congress because “Washington is broken, and Washington has lost its way, and we need leaders who are able and willing to work with whoever will work with them to find common-sense solutions.”

Among other things, he said he favored providing incentives for private industry to develop a distribution network for compressed natural gas and biofuels. But he’s the only one of the five Democrats who stopped short of saying he would have voted for the health-care overhaul legislation enacted by Congress. He worried about the financial effect on state government.

Boling, an attorney who worked for the U.S. Justice Department for 10 years, was Snyder’s chief of staff, a role he called “the most rewarding job I have ever had.” He said he ran because he wants to continue that work.

Boling contrasted himselfwith Wills by pointing out his support for health-care and clean-energy legislation, also known as cap and trade, passed by the U.S. House. Boling said the energy legislation would create jobs, Wills worried that it would be a jobs killer.

Elliott, in the state Senate since 2009, was in the state House from 2001-07. She said she ran for Congress because she has seen politics hold people back, she’s seen it work to uplift people and she has a responsibility to make the nation better.

Elliott, who taught in the public schools for about 30 years, said her top priorities would include creating jobs, working to create a worldclass education system, and making the health-care system better.

Adams said he wants to seek “practical solutions,” such as simplifying the federal income tax code, that make Congress work for the people of central Arkansas.

Print Headline: Elliott scores a 2nd round against Wills