Layaway is back in a big way 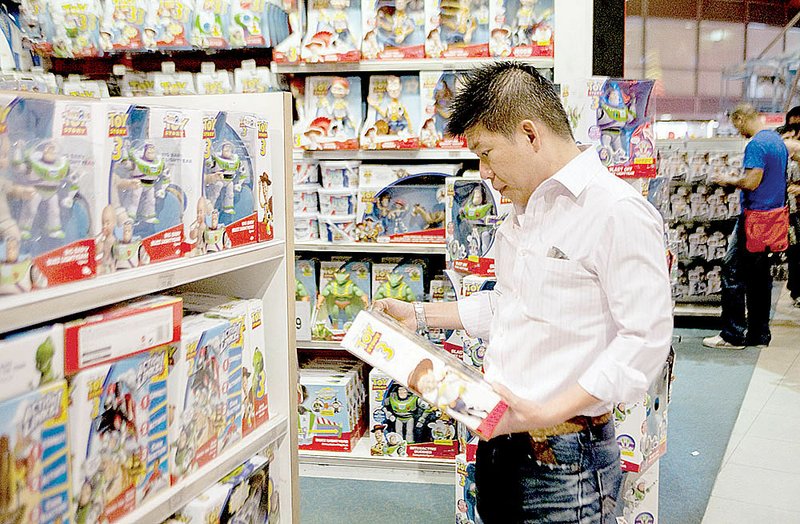 A shopper looks at a Toy Story 3 action figure at the Toys R Us Inc. store in New York. The retailer is among those who have made layaway plans available to shoppers this year.

The decades-old practice of buying on layaway, which diminished with the proliferation of credit cards, appears to be growing in popularity as shoppers pinched by the recession seek to avoid debt and high-interest-rate cards.

Many of the nation’s largest retail chains are offering layaway plans heading into the Christmas shopping season, the biggest retail event on the calendar.

Sears Holdings Corp., which operates nearly 4,000 Sears and Kmart stores in the United States and Canada, brought layaway back for 12 weeks for back-to-school shopping and plans an eightweek run for Christmas.

Layaway is popular with customers, said Salima Yala, vice president of financial services at Sears Holdings,and with the economic downturn, “it has resonated even more so.”

Shoppers make a 15 percent payment, or a minimum of $10, upfront, then pay down their purchases every other week. A $5 service fee applies, but no interest is charged.

“We’ve seen customers use layaway for everything,” Yala said.

Some retailers limit layaway to certain regions of the nation. Leading electronics retailer Best Buy Co. Inc. of Minneapolis, for example, has layaway at 28 stores in Texas but none in Arkansas.

Wal-Mart Stores Inc. of Bentonville, the nation’s largest retailer, phased out layaway in 2006.

Devanie Angel, a California-based shopping adviser and Web publisher, whose sites include layawayplans. net, said she first started seeing stories about the revival of layaway in November 2008 as the recession squeezed shoppers’ budgets. At first, she said, she considered it a “weird, antiquated thing” that probably wouldn’t catch on.

Since then, retailers such as Toys R Us and GameStop have gotten into the game.

“It’s become much more mainstream. The stigma seems to be going away,” Angel said. “What used to seem like a goofy, old-fashioned thing is now viewed as a more mainstream choice for the average consumer.”

Shoppers, she said, should study the terms to avoid steep charges or penalties. Layaway wouldn’t make sense for a $20 shirt, she said, but would for an Xbox 360 game console, for which prices start at more than $100.

“Layaway actually is a great model for individuals and families for delayed gratification,” he said.

It also could serve as a stepping stone to other types of focused savings, such as for the purchase of a car or for a college education, Neiser said.

“You’re being your own bank,” he said.

Best Buy requires a minimum purchase of $250, a 5 percent layaway fee and a 25 percent down payment. The balance is to be paid off in four or six biweekly payments.

Target Corp. of Minneapolis does not offer layaway but offers 5 percent discounts on merchandise bought with the store’s branded credit card, or its branded debit card thatdraws on the buyer’s existing bank account.

Burlington Coat Factory of Burlington, N.J., which has offered layaway since 1972, gives shoppers 60 days to pay off layaway purchases at its namesake stores and 90 days for purchases at its Baby Depot stores, spokesman Mark LoCastro said. The company charges a $5 service fee and requires a 20 percent deposit.

About 10 percent of the company’s customers use layaway, which accounts for 5 percent of annual stakes, he said.

Erin Huffstetler, a Tennessee writer whose focus is frugal living and debt reduction, said layaway is “the most popular that it’s been in years.”

“More and more people are trying to stay away from credit cards this year, and that’s probably the easiest way to do that,” she said.

Using layaway, Huffstetler said, shoppers can shop early when stores have full inventories and spread out their payments leading up to Christmas.

Still, she said, she doesn’t expect a blockbuster Christmas season.

“Consumer confidence is still really down, even though the economy is supposed to be turning around,” she said. “They’re really after the deals this year. It’s going to take a lot to pull people in, for sure.”

Print Headline: Layaway is back in a big way