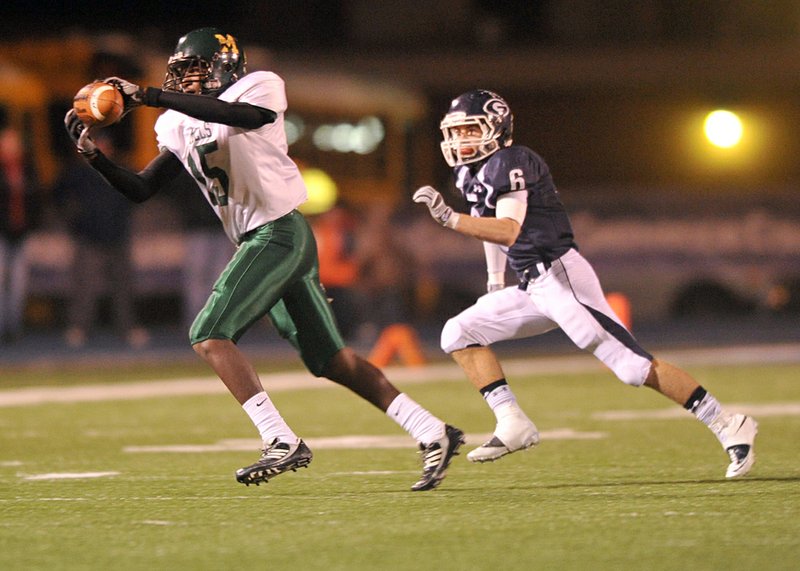 Mills receiver Blake Hughes (left) catches a pass in front of Greenwood defender Blake Hasley during the Comets’ 20-14 loss to the Bulldogs on Friday in Greenwood.

GREENWOOD — Mills quarterback Christian Hampton danced and darted through the Greenwood defense Friday, but the Bulldogs blanketed Comets receivers in the final minute.

Forced to the air, Hampton’s final two passes fell incomplete at Smith-Robinson Stadium, enabling the fourth-ranked Bulldogs to escape with a 20-14 victory over the fifth-ranked Comets in the quarterfinals of the Class 5A playoffs.

Mills took over on downs at its 27-yard line with 1:13 remaining. Hampton completed passes to Terrell Johnson and Jonathan Foster to get to the 40-yard line, but Greenwood’s Chance Moquett tackled the scrambling Hampton for no gain with 13 seconds remaining. After the Comets called their final timeout, Hampton hit Frederick Jones across the middle for 38 yards to theGreenwood 22.

Hampton threw incomplete out of the back of the end zone with six seconds left, then misfired under pressure on the final play of the game.

“You want to have a chance to win on the last possession of the fourth quarter,” Mills Coach Russell Patrick said. “We had a chance and that’s all we can ask for. This is what you play for.”

After opening the game with an 80-yard touchdown drive, the Bulldogs were throttled until the fourth quarter.

Greenwood put together a 13-play drive in the third and fourth quarters, capped bya 2-yard run by quarterback Stephen Hogan for a 14-14 tie with 9:53 remaining.

After forcing a Mills punt, the Bulldogs drove 68 yards for the winning touchdown. Drew Morgan shed four tacklers on a 33-yard reception to get the Bulldogs out of an early hole. Hogan ran 6 yards for the touchdown with 6:31 left. A high snap led to a missed extra-point kick.

Hogan was perfect on the Bulldogs’ first possession, hitting all five passes for 36 yards on an 80-yard drive. But it was a downfield block by Hogan that allowed Justin Sunde to score on a 32-yard run. Adam McFain’s kick gave Greenwood a 7-0 lead 2:29 into the game.

Mills scored late in the first half on a 70-yard drive. Hampton ran 17 yards up the middle for the touchdown with 1:20 left in the first half. The center snap on the extra point sailed over the head of Hampton, who was lined up to kick, leaving Greenwood with a 7-6 halftime lead.

BATESVILLE - Batesville (12-0) scored three touchdowns off turnovers in a victory over Monticello (8-4).

Monticello’s first drive was stopped in the end zone by a Matthew Showalter interception. Batesville scored on a 2-yard run by Jordan Childress.

Monticello scored its only touchdown in the third quarter with a 15-yard run by Trey Hawkins. Childress scored Batesville’s final touchdown on a 2-yard run in the fourth quarter. He finished with 135 yards on 26 carries.