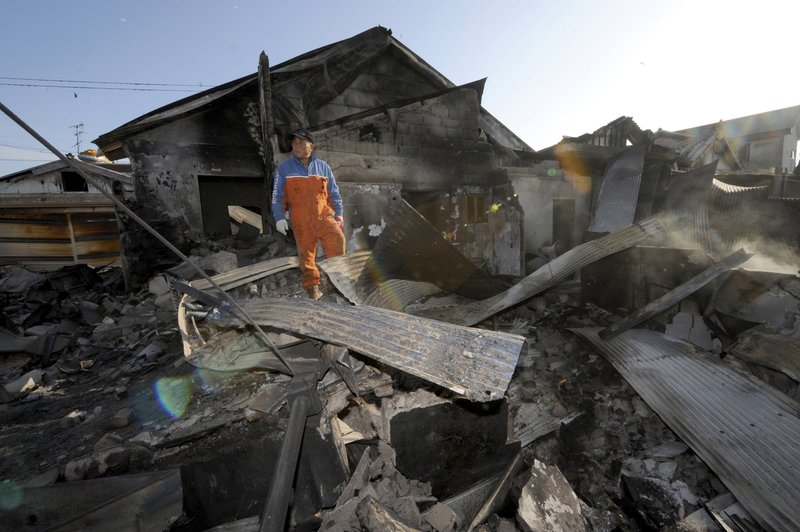 A South Korean resident stands on the rubble of a destroyed house on Yeonpyeong island, South Korea, on Wednesday, Nov. 24, 2010. So

INCHEON, South Korea — Rescuers found the burned bodies Wednesday of two islanders killed in a North Korean artillery attack — the first civilian deaths from a skirmish that marked a dramatic escalation of tensions between the rival Koreas.

The barrage on the tiny island of Yeonpyeong in the western waters near the Koreas’ maritime border also killed two South Korean marines and wounded 18 others Tuesday in what U.N. Secretary-General Ban Ki-moon called one of the “gravest incidents” since the Korean War.

As South Korean troops remained on high alert and buildings continued to burn, exhausted evacuees streamed into the port city of Incheon after spending the night in underground shelters, embracing tearful family members and telling harrowing tales of destruction.

The U.S. stations more than 28,000 troops in South Korea to guard against North Korean aggression, a legacy of the bitter three-year conflict that ended in a truce, not a peace treaty, in 1953. Seoul and Washington reaffirmed plans to stage joint military exercises later this week in the Yellow Sea, just 70 miles (110 kilometers) south of Yeonpyeong island. The White House said the USS George Washington aircraft carrier would head to Korean waters to take part.

In Pyongyang, residents boasted that the exchange showed off their military’s strength and ability to counter South Korean aggression.

Artillery and gunfire break out sporadically along the land and maritime borders dividing the two Koreas, and have erupted in deadly exchanges four times since 1999.

And in March, North Korea was accused of launching a torpedo that sank a South Korean warship, the Cheonan, killing 46 sailors. Seoul considers it the worst military attack on the country since the war, but Pyongyang has denied responsibility.

The North’s most notorious act of terrorism was the 1987 bombing of a South Korean airliner that claimed 115 lives. And in 1996, a group of North Korean spies slipped ashore from a submarine and killed three civilians and a South Korean army private while roaming the countryside for weeks.

However, Tuesday’s shower of artillery was the first to strike a civilian population. The bodies of two men, believed in their 60s, were pulled out from a destroyed construction site Wednesday, the coast guard said.