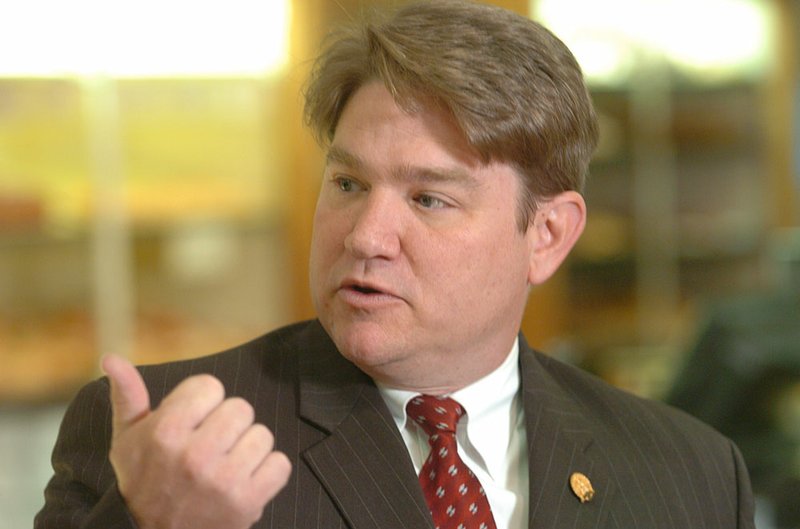 Secretary of State-elect Mark Martin, called “fiery” by a colleague, says sometimes “the passion” comes out in his political dealings.

A mechanical engineer, Martin was involved a few years back in the political action committee for the National Society of Professional Engineers. That led to him meeting Berry.

Before that, Martin said, he viewed politicians as “superhumans, high up and far away.” After meeting Berry, he understood they are “regular” folks.

“I realized I could do that,” Martin said in an interview in the cafeteria in the state Capitol basement. “I was interested in making the world a better place in my own special way.”

After that meeting, Martin, a Republican from Prairie Grove, was elected in 2004 to the state House in District 87. Term-limited from seeking re-election this year, he ran for secretary of state, beating Democrat Pat O’Brien of Jacksonville 51 percent to 49 percent.

During the cafeteria interview, Martin seemed on edge, his cell phone frequently vibrating. “I’m about to blow up,” he said.

He’s been meeting current employees of departing Secretary of State Charlie Daniels, a Democrat. Martin said he’s not used to being a focus of attention and wants to let employees know their job status as soon as possible. The office employs about 150 people.

Earlier this month, he got crossways with fellow Republican Rep. Donna Hutchinson of Bella Vista, telling her that legislators shouldn’t meddle in his secretary of state affairs. That happened after Hutchinson posted a suggestion on his Facebook page.

The episode is an example of how legislators describe Martin: Some call it passionate, some call it prone to anger.

“Technical folks sometimes have trouble with public perceptions,” said Sen. Johnny Key, R-Mountain Home. “He can get intense. But that’s not always a bad thing. He’s mellowed a lot since coming here [to the Legislature].”

Key recalled a Republican caucus meeting a few years back when Martin, then a freshmen, “spoke very strongly” against a fellow Republican, accusing him of being too soft on an issue. Lately, Key said, Martin has become “more circumspect.” Key pointed out that Martin didn’t get angry when a Senate committee rejected a Martin bill to allow the sale of raw milk.

Key said that last year he urged Martin to run for secretary of state. He said he was impressed with Martin’s mix of a business and engineering background.

Martin shares the name of a NASCAR driver from Batesville.

Doug Matayo, a former legislator from Springdale, will be Martin’s chief deputy in the secretary of state’s office. He said people who see Martin as anger-prone “misinterpret” Martin’s reactions.

“They might think it’s anger, but it’s not necessarily,” Matayo said.

Rep. Ed Garner, R-Maumelle, wonders whether Martin is “Irish” because of his emotion.

“Many people don’t realize how smart he really is,” Garner said. “He’s known for being fiery. Some people are put off by that, but he’s an absolute sincere guy.”

When Hutchinson suggested that Martin not print some materials in Spanish, Martin replied on his Facebook page that he would “take care” of it.

“It seemed flippant, I thought,” said Rep. Uvalde Lindsey, D-Fayetteville. “He’s smarter than that. Mark knows you have to follow federal election law.”

Martin later said he was only saying that he would address the issue, not that he sided with Hutchinson. He’s declined to state a position on having his office produce Spanish-language material.

He said he viewed Hutchinson’s suggestion as “pushing” him. He accused her of stepping “beyond her authority” and that legislators should “take care” of their own business and not get involved in his.

Martin said being involved in professional organizations of engineers has taught him to avoid little things that make people angry and instead look for areas where opposing sides can get along.

“We all are constantly in self-improvement,” he said.

Legislators often present concerns they have or questions from constituents to elected officials. Next year, legislators likely will seek Martin’s ear on redistricting. As secretary of state, he’ll be one of three elected officials (along with two Democrats, Attorney General Dustin Mc-Daniel and Gov. Mike Beebe) redrawing legislative district boundaries.

Will he react to suggestions from legislators in the future like he did with Hutchinson?

Matayo answers this question for Martin.

“We will accommodate all legislators who have requests,” Matayo said. “We welcome their questions and comments.”

Another example of an emotional display by Martin came during the 2009 legislative session. Rep. Gregg Reep, D-Warren, was presenting a bill for the governor’s plan to raise the tobacco tax for health programs.

Reep told the House the governor planned a balanced budget.

Martin then blurted out from his seat that, of course, the governor was presenting a balanced budget because the state constitution requires it.

Martin apologized from the House floor the next day.

“I broke decorum,” he recalled. “That’s the passion coming out.”

As a legislator, Martin sponsored bills to allow people to openly carry handguns, to require the state to develop guidelines to teach the theory of intelligent design in public schools, and to require voter approval of state sales- and use-tax increases before they can take effect. They didn’t become law.

He became known for starting a blog and updating it from a laptop while participating in committee meetings.

Martin said he’s looking forward to leaving the Legislature so he can concentrate on nuts-and-bolts administration, rather than debating policy. He’s said he has no specific plans for the office.

“The engineer in me is coming out hard and strong,” he said.

The secretary of state is paid $54,305 a year. His duties include helping counties with elections, maintaining a statewide voter-registration system, caring for and providing security at the state Capitol and its grounds, and maintaining a number of business and state records.

Martin was born Feb. 18, 1968, in Kansas City, Mo., where his father was working as a forklift operator. As a baby, Martin returned with his family to their eastern Arkansas roots so his parents could run the family farm in St. Francis County.

His first exposure to politics came as a child in the 1970s, sitting atop his father’s shoulders at farm meetings where former Govs. Dale Bumpers and David Pryor spoke. His father was involved in a movement for better farm prices and participated in a rally in Washington, D.C.

“Philosophically, I think there isn’t much difference between people that care about other people,” Martin said. “I think a lot of that rubbed off [from the farmers’ movement]. I care about people.”

At Hughes High School, Martin got good grades but never thought much about college. He assumed he would work on the family farm. But his dad one day told him there wasn’t enough money in farming and he needed to go to college. Martin agreed and enrolled at the University of Arkansas at Fayetteville.

He recalls being in college and being taken aback during a formal dinner involving the use of different utensils for particular foods.

“The big deal for my family was to go to Bonanza when we got good grades,” Martin said. “And that was huge. I’ve been elected to office and been to engineering school but I still feel so blue-collar.”

To pay his way through school, Martin worked two jobs (as a plumber during the week and as a night dispatcher for a natural gas company during the weekend). He soon found the schedule too hectic, so he joined the Navy as a way of paying for school through the GI Bill. He was stationed mostly at Pearl Harbor, Hawaii, working as an engineering technician.

While in the Navy in 1990, he married the former Sharon Tilley. They had met on a blind date in college. They now have three children, Rachel, 12; Joshua, 10; and Rebekah, 6. He’s a Southern Baptist, and he and his wife home-school their children.

After receiving an honorable discharge, he said, he returned to the UA and received a mechanical engineering degree in 1998. He worked for several engineering firms before becoming a self-employed engineering consultant, allowing him to spend more time at the Legislature.

Martin plans to buy a house in the Little Rock area after he sells a house the couple own off Beaver Lake.

Martin acknowledged during a debate with O’Brien in October that he lacks self confidence because of his background, growing up with little money.

After watching a replay of the debate, he said he kicked himself for getting too emotional.

“I’m not naturally an angry person,” Martin said. “I’m very passionate. My passion goes two ways. I’m just about as apt to tear up about something as I am to get agitated and intense.”