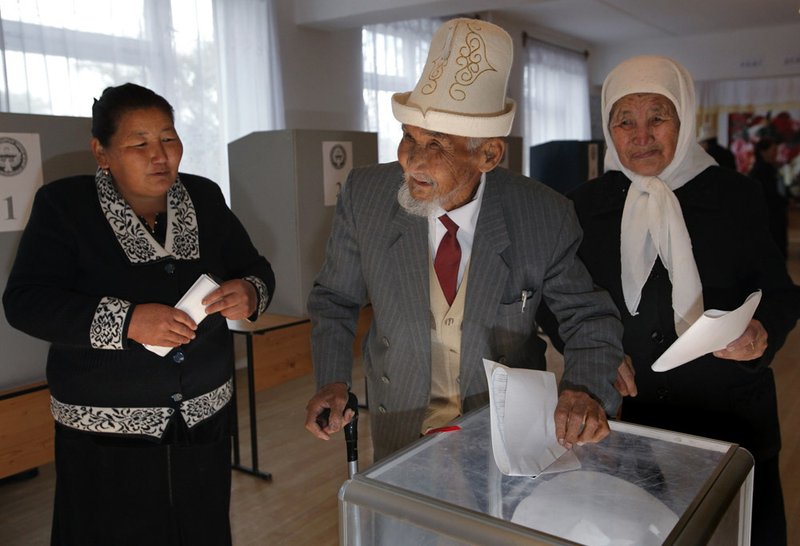 Kyrgyz people cast their ballots at a polling station in the village of Arashan, 20 km. (12 miles) south of the capital Bishkek, Kyrgyzstan, Sunday, Oct. 10, 2010. Voters turned out in force Sunday in Kyrgyzstan for parliamentary elections to choose a new parliament in the hope that it will usher in a new era of democracy, in sharp contrast to the strongman model exercised under President Kurmanbek Bakiyev, who was ousted from power in April 2010 amid violent public demonstrations. A U.S. air base is hosted in Kyrgyzstan which is seen as strategically vital to the conflict in Afghanistan.

Voters turned out in force Sunday in Kyrgyzstan to choose a new and empowered parliament that the government hopes will usher in an unprecedented era of democracy.

This former Soviet nation, which hosts a vital U.S. air base near Afghanistan, is set to embrace a parliamentary system of governance in a largely untroubled vote that has won praise from the United States.

The vote came after an exhausting year of political turbulence and ethnic violence in the south.

A fair vote among the 29 competing parties and the creation of a strong legislature would set Kyrgyzstan apart from the other former Soviet republics in Central Asia, where power is usually held by authoritarian and unaccountable leaders. A democratic Kyrgyzstan would also create a sense of unease in the neighboring countries and may help nurture the seedlings of democratic ideals.

Once the votes are counted, the political parties will have to begin the novel procedure of working out how to share power. Under the new system, the parliament will have to come to an agreement on forming a government and pick a prime minister.

"The political players have a very scant idea of how exactly events will unfold after the elections," said political analyst Marat Kazakbayev.

Interim President Roza Otunbayeva, who has battled to keep her country from the edge of disintegration, will now take on a more formal role as head of state.

Security was tight for the vote in a bid to prevent any possible outbreaks of unrest.

After casting her ballot in the capital, Bishkek, Otunbayeva said the fair conduct of the vote precluded any possibility for protests.

Even so, the country was abuzz all day with rumors of planned protests against an outcome that has not yet even been announced.

All eyes were on the southern cities of Osh and Jalal-Abad, where violent clashes between ethnic Kyrgyz and minority Uzbeks in June left more than 400 people dead, most of them Uzbeks, and displaced around 400,000 people.

The election marks a sharp departure from the strongman model exercised under President Kurmanbek Bakiyev, who was ousted in April amid violent public demonstrations over stagnant living standards and corruption. Bakiyev, like his counterparts in other Central Asian nations, maintained a tight grip over all levers of political life and worked hard to quash all opposition.

Bakiyev had come to power in 2005 following street protests known as the Tulip Revolution.

The Central Election Commission announced that by the closing of the polls more than 55 percent of eligible voters had cast their ballot. Although that turnout is lower than usual in Kyrgyzstan, it is a counter-intuitive demonstration of political engagement, as there was no evidence during this vote of people being coerced into voting.

In a show of Washington's backing for the vote, U.S. Assistant Secretary of State Robert Blake told Radio Free Europe's Kyrgyz service that the elections could become a model for the entire region. Last month, President Barack Obama's administration announced it had earmarked $5 million to help Kyrgyzstan organize its elections.

Of the 29 parties in the running for the 120 seats available, around half a dozen are expected to gain seats. No party is likely to win much more than 15 percent of the vote or can be allotted more than 65 seats, meaning a coalition government is unavoidable.

The elections have pitted a group of parties backing the recently amended constitution boosting the power of the legislature against parties that aim to restore the authority of the presidency. The pro-constitution camps include Ata-Meken and Social Democratic Party of Kyrgyzstan, while their most prominent opponents are Ata-Zhurt, who are particularly popular in the south.

Polls show both potential camps are running a close race, although the final makeup of the coalition may be subject to tortured negotiations.