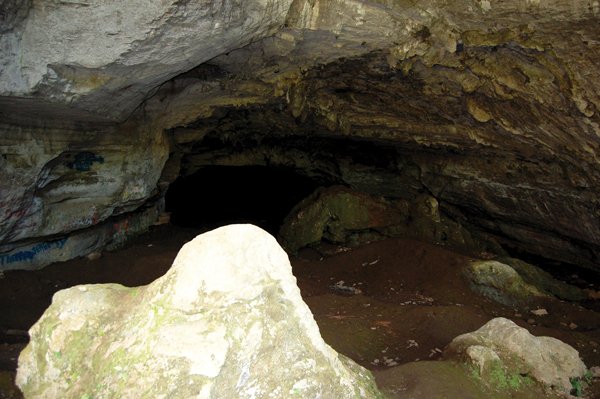 Blowing Cave in Cushman holds a lot of mysteries. Some people believe that a subterranean network of tunnels is home to a humanlike race of beings and that Blowing Cave is one of only five entrances in the nation to the underground empire.

BATESVILLE — Driving down Blowing Cave, a gravel road in Cushman, there is a certain point where it is not accessible by car, and one must hike up a hill. Approaching the mouth of Blowing Cave, the ghostly sound of rushing water emanates from an unseen source. The rich history of the cave includes its use as a former party place during the Depression, mysteries of people getting lost and never returning and serving as one of five entrances into the underworld of another race of humanlike beings.

Science fiction writer Richard Shaver told tales of an underground race of beings with a bluish tint to their chalky skin.

“My take on it is if they were there, someone would have found them,” James “Tiny” Smith said. “It’s just a little bit too far out for me to rationalize.”

Smith grew up in Cushman and served as school superintendent there for several years. He has written 18 books on the history of the area; he also taught high school biology.

There is a lot of speculation about the cave, which is on private property. In the 1950s, Shaver wrote about an underground empire, and some of his followers believe there are subterranean tunnels that supposedly network and intersect across the country.

“These people believed they were humanlike, and they live among us, and we don’t recognize them,” Smith said. “People have explored in there for miles, and they’ve never seen any signs of [human] life.”

When Cushman was established in 1886, people used the cave as a recreational place, where parties and dances were held, Smith said.

Although people have partied in and explored the cave, the alleged entrance to the underworld is not through the mouth of the cave.

Rumor has it that to enter the underground empire, one must slip through a hidden crevice between the cave’s entrance and the lake, and then through another crevice, which leads to a stairway. There are reports dating back to the 1940s and ’50s of interactions with this mysterious race.

Cushman was once the center of the manganese mining industry and served as a shipping point for businesses and farmers in northern Independence County and most of Izard County. Cushman was an important shipping and trade center for 72 years after it was established.

“There’s not another place in the world like Cushman, Ark.,” Smith said. “Cushman was considered the meanest town around. There were lots of miners, money and whisky, so there was a lot of fighting going on.”

An author by the name of Branton wrote about exploring a Cushman, Ark., cave in his book The Underground Empire:

“The most shocking surprise of all, however, occurred on the third day after exploration of this tunnel began, a considerable distance from the crevice from which they entered the tunnel. They were walking along when all-of-the-sudden they turned around and found themselves face-to-face with a group of human-like beings who stood around 7 to 8 feet tall. ‘Their’ skin had a faint pale-bluish, almost clay-bluish tint to it and their eyes were relatively large and owllike. But ‘they’ were definitely human, according to David L., who was on this particular expedition. The ‘people’ took out some type of electronic device, apparently some kind of parabolic communicator, and after a few attempts they succeeded in establishing a communication link using the electronic ‘translator.’”

Whether the humanlike beings actually live in the subterranean chasms of Cushman or not, the stories are still alive, and the fascination with Blowing Cave still attracts visitors.