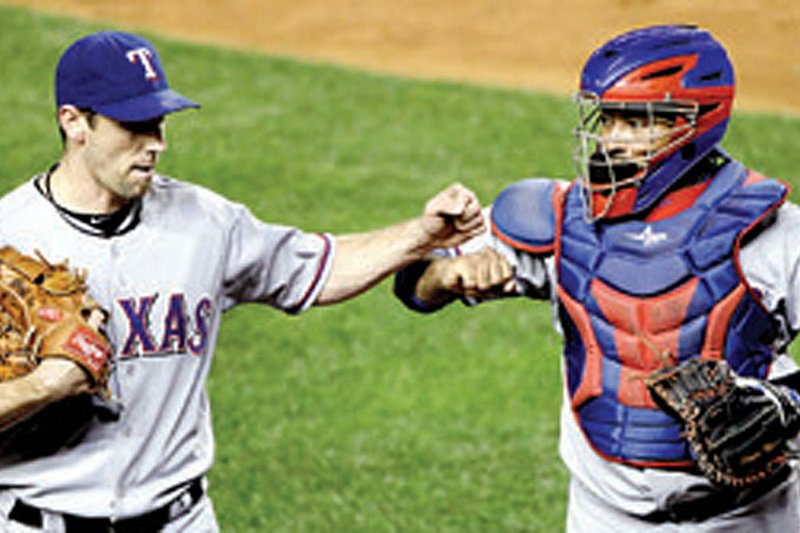 Texas Rangers pitcher Cliff Lee and catcher Bengie Molina greet one another during the fourth inning of Game 3 of the American League Championship Series on Monday.

NEW YORK — Cliff Lee stumbled as he stepped up to his seat at the postgame podium.

“Booby trap right here,” he said with a grin.

That was about his only slip-up all night.

The ace of October went through the New York Yankees like a buzz saw, striking out 13 and pitching the Texas Rangers to an 8-0 victory Monday for a 2-1 lead in the bestof-seven American League Championship Series.

Josh Hamilton hit an early two-run home run off Andy Pettitte and started a six-run outburst in the ninth with a leadoff double. Lee allowed only two singles in eight innings and became the first pitcher to have 10 or more strikeouts three times in one postseason.

“I’m not satisfied with that,” he said. “We still have some work to do here. A lot of fun to come into New York and get this first one. Hopefully we can come out here tomorrow and pick up where we left off.”

Lee (Benton, Arkansas Razorbacks) improved to 7-0 with a 1.26 ERA in eight postseason starts. Three of those victories have come against the powerpacked Yankees, including two in last year’s World Series for Philadelphia.

New York won the other four games against Philadelphia to take home its 27th championship, but now faces a tall task if it plans to repeat. The Yankees must win three consecutive against the resilient Rangers to advance without facing Lee in a decisive Game 7 at Texas.

Game 4 is tonight and the Yankees will start struggling right-hander A.J. Burnett (Central Arkansas Christian), who hasn’t pitched since Oct. 2. Tommy Hunter goes for Texas in his first career start at Yankee Stadium.

Pettitte, seeking his 20th postseason victory, did his best to match Lee. But the longtime New York left-hander hung a first-inning cutter that Hamilton yanked over the short porch in right for his second home run of the series.

“It was just a bad pitch by me,” Pettitte said. “At the time, you don’t think that’s going to win the ballgame.”

Lee said, “Josh hitting that homer in the first made things a lot easier, that’s for sure.”

Michael Young had three hits for the Rangers, who are 4-0 on the road in these playoffs. Texas won all three games at Tampa Bay in the first round, including two dominant performances by Lee.

Derek Jeter, Alex Rodriguez and the Yankees fared no better. Cutters, curves, sliders - they couldn’t touch Lee, who pumps in one strike after another like a robot programmed to do so.

Lee was so dominant, New York hitters were left shaking their heads in the dugout or questioning calls by plate umpire Jim Reynolds.

Brett Gardner singled leading off the sixth and stole second, but Lee never rattled. He struck out Jeter for the second time, then induced routine grounders from Nick Swisher and Mark Teixeira, who is 0 for 11 in the series.

Lee has struck out 67 and walked only 7 in 64 1/3 innings in the postseason. Even after throwing a season-high 122 pitches, he was going to pitch the ninth until Texas broke it open.

“He was coming back out,” Manager Ron Washington said. “We were going to ride him.”