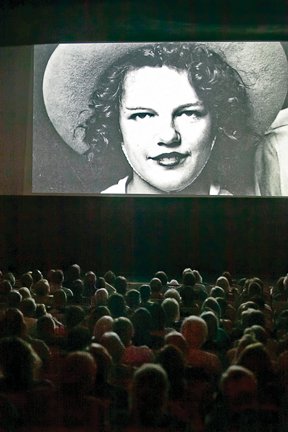 Many people in the audience at the premiere of Disfarmer: A Portrait of America on Friday at the Hot Springs Documentary Film Festival had not been previously exposed to the Depression-era photographer’s work.

HOT SPRINGS — It came as a surprise to the residents of Heber Springs when art collectors from New York City were suddenly interested in their old family photos — willing to pay hundreds and even thousands of dollars for them.

It seemed the art world saw something special in the work of local portrait photographer Mike Disfarmer, whose photos captured the spirit of rural America through two World Wars and the Great Depression.

Disfarmer, who lived in relative obscurity from 1884 to 1959, is the subject of a new documentary, Disfarmer: A Portrait of America, which premiered as the opening-night selection of the 19th Hot Springs Documentary Film Festival on Friday.

“It’s an Arkansas film, and it’s a very good Arkansas film, and it’s a world premier, so a lot of good things are stacked up with it,” said Festival Director Dan Anderson about the film’s selection as the opening-night film. “It’s one of my favorite films, in that I like kind of odd-ball characters. Disfarmer, a guy who lived his whole life as a nobody and suddenly becomes famous, post-mortem, is just a real interesting story. Life works in strange ways, and he is living beyond his years in a way.”

The film features interviews with photographers, collectors and gallery owners who helped bring Disfarmer’s work to the public; and several Heber Springs natives who recall Disfarmer with a variety of colorful adjectives.

Born Mike Meyer, Disfarmer changed his name to dissociate himself with both his family and the farming community in which he lived. Interviewees described him as “a loner” and “a weirdo,” though many flocked to his studio to have their portraits taken.

After Disfarmer died in 1959, retired Army engineer Joe Albright purchased his studio and its content, which included more than 3,000 glass-plate negatives. Albright later sold the plates to Peter Miller, a photographer from New York, who had moved to Arkansas to publish a weekly newspaper. Miller sent copies of the photographs to Julia Scully, editor of Modern Photography magazine. In 1976, with help from Miller, Scully published the first book of the

photographer’s work, Disfarmer, the Heber Springs Portraits 1939-1946, introducing him to the art world.

In more recent years, art collectors have been seeking out original or “vintage” Disfarmer prints from Heber Springs families; and today his work is included in the permanent collections of the New York Museum of Modern Art, the Metropolitan Museum of Art, the Arkansas Arts Center and the International Center of Photography in New York.

Filmmaker Martin Lavut of Toronto first learned of Disfarmer through the book, and Lavut purchased some of the prints. He and several associates from the documentary attended the opening-night ceremonies.

“I got into Disfarmer because I really loved what I saw and because it was available through [Peter Miller’s] snappy prints,” Lavut said. “I got them and I hung them all over the house, and we just looked at it and thought what a great opportunity. This film would be fantastic.”

The film was started in 2007 and completed in May 2010. Producer Dennis Mohr said they wanted to return to Arkansas for the debut.

“This [festival] made the most sense because we wanted to come back to Arkansas, thank everyone,” he said.

“This would be my kind of style — a beautiful town, it’s just more relaxed, you don’t have to run around, it’s a great audience, great programming and I can’t say enough about the staff who helped us out and all the people around here,” Mohr said.

More than 400 people attended the Friday-night screening, which was followed by an opening-night after-party at the Museum of Contemporary Art in the Ozark Bathhouse, where a collection of Disfarmer photographs are on display. The after-party also featured live music by Paul Sammons. Memphis photographer Thomas Petillo made Disfarmer-esque portraits for those in attendance.

Steve Snediker, an instructor of visual arts at John Brown University in Siloam Springs, brought 10 of his cinematography students to opening night “to get inspired by the amazing storytelling that can happen with real-life situations.”

He said he “loved the film” for a couple of reasons.

“One is I kind of am a student of history so it’s always kind of fun to see that unfold. The other thing I loved was the way they told the story,” Snediker said. “They literally set you up progressively to reveal stuff about it. You weren’t sure where it was going. You weren’t sure what the outcome was going to be, and in the end you felt like you had really captured a slice of life.”

The documentary was especially appealing to one of his students, junior Michael Bruner, who is working on a double major in cinematography and photography.

“I worked with probably 10 portrait photographers in the last several months doing my internship, and every one of them had their own specific way of manipulating the person to either smile or do this or that to get that intended shot because then they’d go over the pictures with them, since it’s digital,” Bruner said. “But this photographer did not do that at all. And, in this day and age, you try to recreate that by not doing it and that’s an artistic style, but for him it was just natural. It was not even intended. It’s just how it came out, so I thought that was amazing.”

The film festival will continue through Sunday at the Malco Theatre and will include an additional screening of the Disfarmer documentary at 10 a.m. Sunday. The filmmakers will not be present at that showing.

Nearly 1,000 films were submitted to this year’s festival, with about 116 selected.

“I think it’s very well rounded,” Anderson said of the festival’s film lineup. “There is a lot of diversity in the films, and I think it’s the best possible program we could put together given the logistics and what was submitted. I don’t think I have any regrets about the programming for the most part, so I think people will be excited about it and happy about it.”

In addition to the film on Disfarmer, the festival features a variety of other Arkansas documentaries, including Dogpatch USA, Silent Storytellers, and I am the Homeless.

“There are 10 Arkansas films,” Anderson said. “And that’s always a push because Arkansas is very documentary-

The festival, now in its 19th year, is the oldest, solely documentary film festival in the United States, second only to Amsterdam’s festival , internationally. Visit www.hsdfi.org for more information.