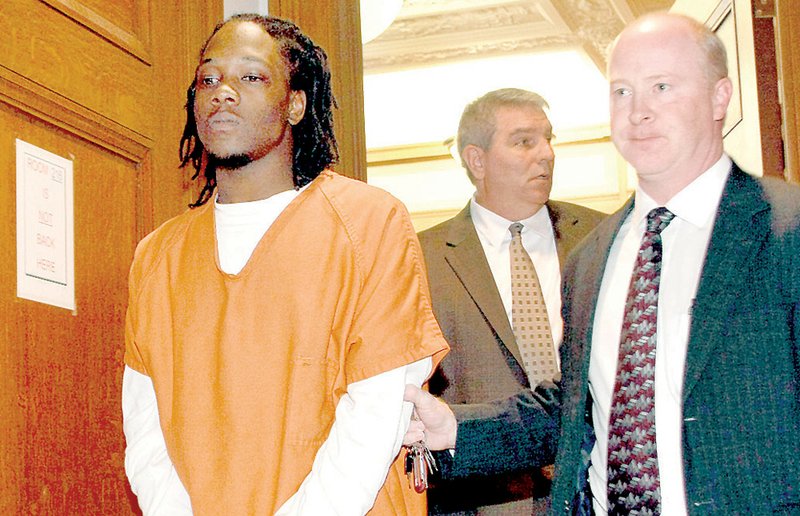 LITTLE ROCK — Seven months and 18 days after his arrest for participating in the Christmas Eve murder of a Salvation Army major in front of his three children, 19-year-old Laquan Javaris Fitzpatrick on Friday admitted his guilt, looked the man’s crying widow in the eye and said he was sorry.

Prosecutors said that Fitzpatrick was the lookout during the robbery and murder of Major Philip Wise. Investigators said the gunman, 20-year-old Brandon Leavy of North Little Rock, was killed during an attempted armed robbery 15 days after Wise was killed.

Fitzpatrick’s guilty plea to first-degree murder will keep him behind bars for at least 35 years because he will have to serve at least 70 percent of his 50-year sentence - or until he’s 54 - before he can be considered for parole.

Fitzpatrick’s apology - delivered 10 months and a day after Wise’s death - was accepted by Cindy Wise, with the hope that Fitzpatrick’s conviction will help her and her three children recover from her husband’s slaying as they begin a new life in South Carolina.

Asked about her children, who were 4, 6 and 8 when their father was killed, Wise said, “They’re not doing well.”

Stories related to the killing

In exchange for Fitzpatrick’s guilty plea, prosecutors agreed to reduce the charge from capital murder, dropped an aggravated-robbery charge stemming from a holdup at a North Little Rock Radio Shack about a month before Philip Wise’s killing, and recommended the 50-year prison sentence that was imposed by Pulaski County Circuit Judge Barry Sims.

While the original capital-murder charge made Fitzpatrick eligible for execution, Cindy Wise, who’s also a major in the Salvation Army, said she wouldn’t have wanted Fitzpatrick put to death.

Fitzpatrick had made only one previous Circuit Court appearance on the murder charge, with his trial set for January.

With the relatively speedy conclusion of the case, compared with the 13-month average for capital-murder cases, Prosecuting Attorney Larry Jegley said he hoped Fitzpatrick’s conviction would help remove “a stain on the soul of the community.”

Pulaski County residents had seen some extreme violence and its repercussions last year, Jegley said, from the June ambush-killing of a soldier outside a Little Rock recruiting center, the November trial of the man who raped and fatally beat a popular TV news anchor in her own bed, and - two weeks before Wise’s murder - a toddler who was burned to death after her father had been killed.

Prosecutors also used Friday’s hearing to reveal details of the investigation that led to Fitzpatrick’s March arrest in Helena-West Helena.

Philip Wise was shot to death in the late afternoon on Christmas Eve as he was returning to the Salvation Army Corps and Community Center in North Little Rock’s Baring Cross neighborhood with his children. Cindy Wise, inside the center, heard the shots. The family had planned to leave that night for a trip out of state to visit family.

Chief Deputy Prosecuting Attorney John Johnson told the judge that police, after knocking on doors in the area, learned that a man known as “Black” had been seen in the area, with detectives eventually determining that “Black” was a nickname for Fitzpatrick, who was living with Leavy. A search of their residence turned up property belonging to Wise intermingled with Leavy’s possessions and some of Fitzpatrick’s things, the prosecutor said.

The prosecutor said friends of Fitzpatrick’s said he had admitted to them that he’d been involved in the slaying, and that in a letter to one friend, Fitzpatrick admitted to being the lookout for Leavy when he tried to rob the 40-year-old Wise.

Johnson said prosecutors had the letter’s envelope tested for DNA, which confirmed it had come from Fitzpatrick. Johnson said the letter described Fitzpatrick’s role as lookout and his remorse for Philip Wise being killed in front of his children. Police had “fully investigated” Leavy, Johnson told the judge, and are confident that he was the killer.

Questioned by the judge about his intent to plead guilty, thereby giving up his rights to a trial and appeal, Fitzpatrick, who has no prior criminal history, answered “yes, sir” in a rumbling deep voice. At the conclusion of the proceedings, his defense attorneys, Lott Rolf IV and Bret Qualls, nudged him and he mumbled into the court microphone.

“I want to say I’m sorry to Mrs. Wise and her family for their loss,” Fitzpatrick said after Sims urged him to speak up.

“She’s back there, turnaround and talk to her,” the judge said, with Fitzpatrick, his hands shackled, twisting to look at the crying woman and her family.

Leavy, the other man believed to be involved in Philip Wise’s killing, was shot to death Jan. 7 by a security guard while trying to rob a Dodge’s Chicken store at gunpoint on East Broadway in North Little Rock.