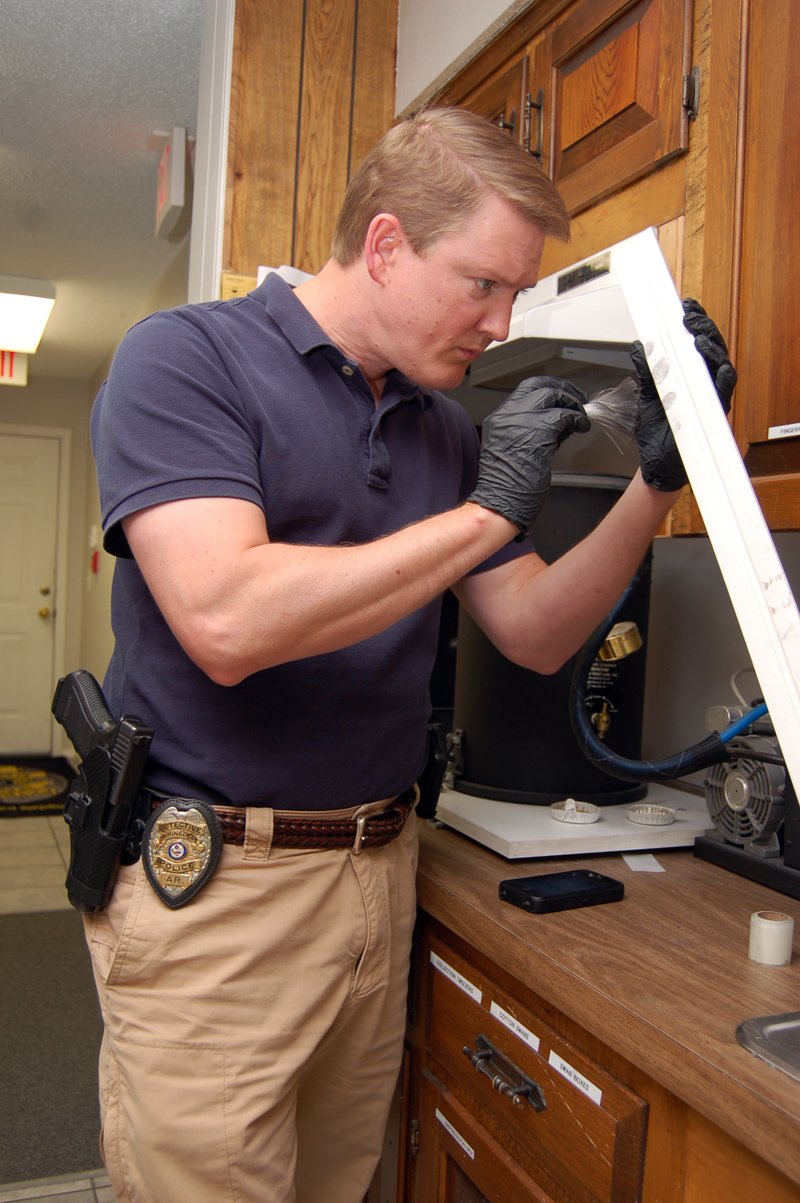 Mark McCann is not your typical law enforcement type.

First, there's the 41-year-old's baby face and warm smile. Him, a cop? He doesn't look stern at all.

Then there's the career path, which took him from movie theater manager to night security guard to part-time sheriff's deputy to Springdale police patrol officer. He's now a detective specializing in fraud/forgery and crime scene investigation.

But what really sets McCann apart is his side project: Screenwriting.

But there he is, the self-described Norm of Chick-Fil-a, "banging away on a laptop" during his lunch hour to write a screenplay.

McCann's latest script, Cabin 6, was turned into a short film that won some awards and even a DVD distribution deal. Recently, Morris Chestnut of the ABC television show V optioned the script, making the fifth time it's been optioned.

It might be, to use a cliche, McCann's destiny to be a writer.

A Fayetteville native, McCann learned to read by watching Sesame Street and the Electric Company. When visiting his grandmother's, he would lug around an old manual typewriter that was bigger than he was to clack out stories.

"Certainly not an A student," he said. "I had a few writings that made it into school publications but it never occurred to me that I could actually be a writer."

In 1986, McCann and a friend decided to write a crazy eighties comedy. They bought the book Screenplay by Syd Field to teach themselves how to write a script.

The script never got finished, but McCann's interest in screenwriting didn't wane. He was hooked. On a message board in the early days of the internet, he ran across a movie producer. He pitched an idea, which then became the first act to a script.

"I was quite stunned, not really knowing what to do.  So I called up my friend and asked if he still had that book.  He did, and I borrowed it," McCann recalled. " I wrote the first act (about 30 pages), sent it to the guy, and he liked it.  He asked for the rest of the script.  I was kind of at a loss because there was no rest of the script!

McCann got the rest of the script written, but the producer decided to pass on it. Still, McCann was encouraged to keep on writing.

The result is a hobby that has become so much more than just a hobby. It has sent him to Hollywood twice, and allowed him to meet with producers, directors and fellow screenwriters.

He's even been called on to offer his police expertise.

"Last year I got a phone call from the guy who wrote Starship Troopers," he said. "He was working on a script that involved a bank robbery, and had heard of me through a mutual friend in LA.  So he called me up to ask about bank robberies in general."

But one thing McCann doesn't do is use his first job as fodder for his writing, as many might assume.

"I try to avoid writing movies about cops.  That may seem illogical, but let's face it… being a cop is not all roses and sunshine," he said.  "Nobody calls 911 because they're having a good day.

"Being a cop means you are there for the worst time of people's lives; they're bleeding, crying, or both.  Rarely are there happy endings.   So when I write, I create my own world with happy endings."

The inspiration for Cabin 6 came from a real-life experience.

"My wife and I once stayed at Cabin #6 in Devil’s Den State Park, and inside was a journal filled with entries of past visitors," McCann said. "I was struck by all the different reasons people came to the same place I did, and at various stages of their lives. It inspired me to write the short film."

Building on that success, McCann continues to write. For now, he is keeping his day job while following his bliss.

"My first goal was to get my work produced. I was blessed to have that happen with Cabin 6 the short," he said. "My goal now is to get a feature-length movie made. Then, if I can get a few of those under my belt, I’d eventually love to do some speaking engagements for screenwriters."