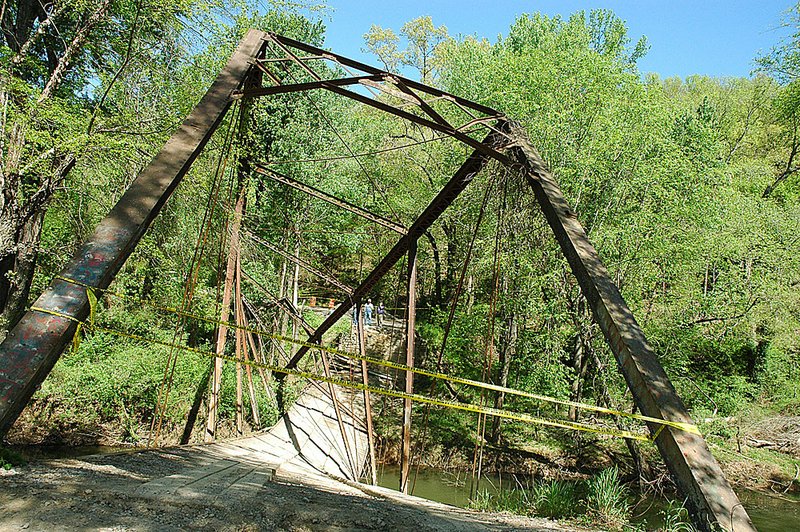 Yellow tape blocks an entrance to the historic Fryer Bridge, Tuesday, April 12, 2011, in Morrilton, Ark. The bridge collapsed after the driver of a 9-ton truck drove over the structure that has a 3-ton weight limit. The Fryer Bridge is a metal truss that's one of the last of its kind in the state. The state highway commission says it's the oldest bridge that was still in service in Arkansas. (AP/The Log Cabin Democrat / Candie Beck )

LITTLE ROCK — Conway County Judge Jimmy Hart said he would talk with the Arkansas Historic Preservation Program — a state agency that, among other things, maintains information on historic sites — including a bridge that was heavily damaged Monday. An article in Wednesday’s editions gave the incorrect name for the agency.

Travelers spanning three centuries - first ones on foot, then in covered wagons or on horseback, recent ones in cars, vans and pickups and finally one in a 9-ton truck - have crossed Fryer’s Ford Bridge in rural Conway County.

Until this week, the iron-truss structure built in 1890-91 over Point Remove Creek that is also known as the Solgohachia Bridge was Arkansas’ oldest bridge still in service.

That changed Monday, when the bridge was yanked from its foundation when a tall water reel that the heavy rig was pulling got caught on a clearance bar, County Judge Jimmy Hart said Tuesday.

Hart said he would talk with Arkansas Historic Preservation Society officials but did not know whether the bridge could be saved.

“I’ve been across it more than once,” Hart said.

“It’s over a 100-year-old bridge. It’s got some memories about it,” but it also has some significant restrictions.

“I’d like to see some type of preservation done” if feasible, he added.

Added to the National Register of Historic Places in 2004, the one-lane, 131-foot long bridge was a popular shortcut between the communities of Solgohachia and St. Vincent.

If the bridge can’t be repaired, the county will have to build another bridge there, Hart said.

The bridge is roughly 2 miles outside Solgohachia, which is about 6 miles north of Morrilton.

The structure’s east end is still “pretty much intact,” Hart said, but the west end “really took the beating” and landed in the creek. He said he hopes workers can get it out of the water before a heavy rain pushes it down farther.

Authorities said Jason Burris, 34, of Russellville was driving the 9-ton truck when the accident happened Monday.

He was ticketed for disobeying a traffic-control device - signs prohibiting commercial trucks from using the bridge, which only vehicles up to 3 tons could legally cross.

Sheriff Mike Smith said Burris “wasn’t saying too much” when they talked.

“He might have been in a little bit of shock,” Smith said.

In January 1890, Conway County contracted with the Ohio-based Wrought Iron Bridge Co. for an iron superstructure costing $3,898 and signed a separate contract with a local mason, Alfred Cook, for building three stone abutments, according to the Highway Department. The ironwork was erected in 1891.

“As the oldest remaining bridge in vehicular service in Arkansas, and the only known remaining bridge built by the Wrought Iron Bridge Company, one of the largest manufacturers of iron truss bridges in the 1800s, the Solgohachia Bridge is an important and rare example of a nineteenth-century iron bridge,” according to the Arkansas preservation group’s website.

While the historic group calls the crossing the Solgohachia Bridge, the Highway Department’s Nilles said the name is Fryer’s Ford Bridge.

One person especially saddened by the accident was Scott Fryer, the great-grandson of Richard Fryer, for whom the crossing was named.

Scott Fryer said he learned of the accident when his wife heard about it on television and let out “a blood-curdling scream.”

Scott Fryer, who lives near Jacksonville and works for the state Department of Finance and Administration, said his great-grandfather started a farm near the bridge and was Solgohachia’s first postmaster.

“We like to go up there several times a year just to reminisce,” Fryer said as he began relating family history, such as the 1915 murders of his great-grandfather, a son, a daughter and a son-in-law at the hands of a man who went to prison, got out, killed again and went back to prison, where he died.

Water-transfer services take water to drilling sites, such as those in the Fayetteville Shale, to complete wells through hydraulic fracturing.

Boren declined to say how long Burris had worked for the company, and Burris could not be located by telephone.

“We are working with the local authorities ... to gather all the facts of the incident,” Boren said.

Hart said, however, that SweetH2O “is going to have to assume the liability” and added, “I just hope they’ve got good insurance.”

As for Scott Fryer, he and his wife hope to visit the bridge site this weekend.

He doesn’t see how the bridge can be repaired well enough to handle vehicular traffic and still be historically accurate.

“If they are able to raise it up out of the water and get it back in place, I think pedestrian traffic” only might be the best option, he said.