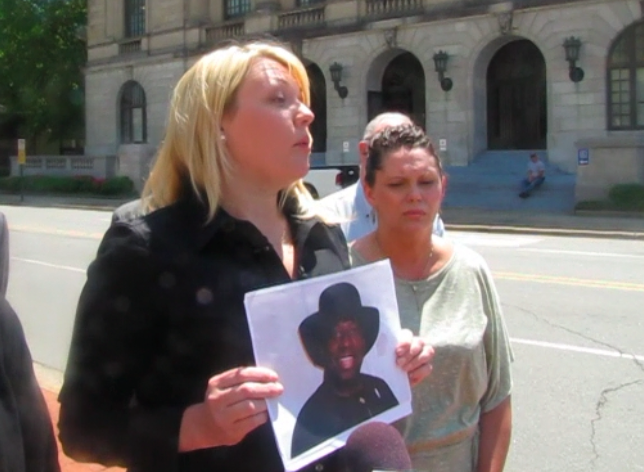 Attorney Jessica D. Arbour, left, holds up a photo of Catholic Priest Charles U. Kanu during a news conference Wednesday outside the Pulaski County courthouse.

LITTLE ROCK — An Arkansas woman claims in a lawsuit filed Wednesday in Pulaski County Circuit Court that she was sexually exploited by a Catholic Priest and that church officials who knew or should have known about the danger failed to protect her.

The woman - who is identified as Jane Doe in the filing - spoke during a news conference announcing the lawsuit Wednesday afternoon outside the courthouse. The alleged victim said she has suffered depression and anxiety and that she "lives in fear largely throughout every day and night" because of what happened to her.

The woman purports to have met Father Charles U. Kanu at St. Peter the Fisherman parish in Mountain Home, where he counseled her, converted her to Catholicism and later engaged in sexual acts with her on multiple occasions.

"I think it's time to stop being scared and to stop being silent for things we didn't cause," the woman said, pausing to collect her emotions. "I do feel very strongly that there are other women out there who have suffered by his hand. I hope that in my courage to come forward, they will see that it is OK and there is healing to be found after such a devastating betrayal."

The filing alleges that Kanu over 18 months used sensitive information he learned from the woman to "manipulate and exploit her into complying with his sexual demands." Attorney Jessica D. Arbour said Arkansas law makes it illegal for a person, specifically including a member of the clergy, to consent to a sexual relationship with a person they have power over.

Arbour said Kanu used his position over the woman to assure her his actions were part of "God's plan."

"He took his time to have her let her guard down and then eventually converted it into a sexual relationship as part of the counseling relationship," Arbour said.

The suit adds that at least two other priests were aware that Kanu was engaging in sexual contact with the woman and that Taylor last year directed a priest to look into the allegations.

The Diocese of Little Rock in January suspended Kanu's priesthood and removed him from a North Little Rock parish he was leading at the time. The Diocese said then it acted after an investigation revealed "non-criminal professional misconduct."

In addition to North Little Rock and Mountain Home, Kanu has also served in parishes at Helena, Marianna, Tontitown and Huntsville.