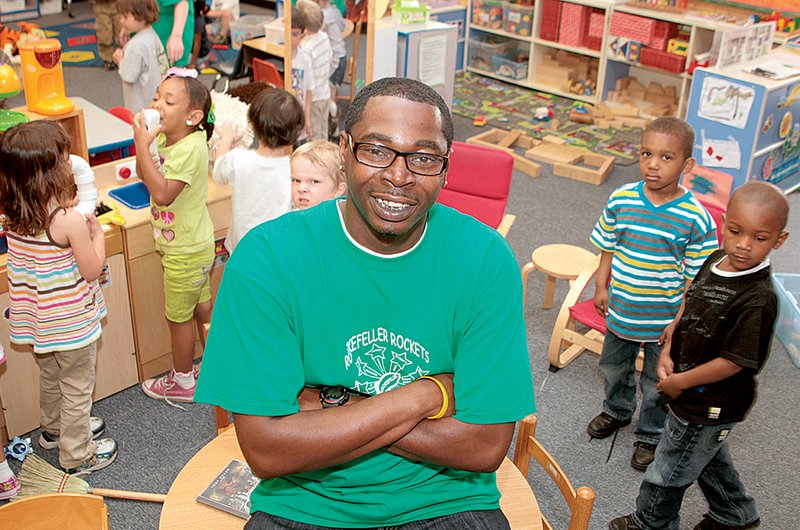 Antonio Moore, who raps under the name Tony Ocean, poses with pupils in his class of 3 year olds at Rockefeller Elementary in Little Rock, where versions of his profanity-free CD are offered in the classroom treasure chest.

LITTLE ROCK — The treasure chests in the classrooms of Rockefeller Elementary School are filled with the regular rewards - cartoon stickers, brightly colored plastic rings, erasers and other treats and incentives for well-behaved pupils. However, some of the treasure chests contain an item that wouldn’t be found in any other school - namely, Tony Ocean’s Back to the Future CD.

The music of the longtime Little Rock rapper - given name Antonio Moore - ended up in the treasure chests because Moore is an early childhood teacher at the school.

“In our classroom, one side is the 3-year-olds and the other side is pre-K,” Moore says. “There are 36 kids and six staff members [in the room].”

Moore, 34, has been in the rap game since he graduated from McClellan High School in 1995. He was a member of Suited-N-Booted, which released CDs starting in 2000 and received notice and awards at local talent shows.

Moore went solo in 1997, self-releasing Hurricanes and Yachts. His hip-hop career got a boost when, late last year, he signed an electronic distribution deal with JMD Records/Universal Music Group. The deal meant that his 2009 CD Back to the Future would spread wide on the Internet.

“I always wanted my music on Amazon and iTunes and Napster,” Moore says. “Before I signed, I would try to put my CD on any site I could, like garageband.com. With laptops now, the music can be right in your lap.”

Moore notes that Back to the Future is that rare thing in hip-hop albums - it is completely free of profanity.

“I took kids from Dunbar [Middle School] with me in the studio,” Moore says. “They sort of blessed the project by being on there.”

While earning his degree from Philander Smith College, Moore was substitute teaching in the Little Rock School District. Soon he found himself with a full time job at Rockefeller. He figures that he has been headed in the direction of teaching and taking care of small children from early in life.

“I don’t have any children of my own,” Moore says. “I have a brother, sister and seven cousins and I helped raise them and they are successful.”

Moore’s dual careers do cross paths frequently. He is never without a way to record rhymes that come to him, even during the middle of the day.

“Yeah, with my phone I try to record [my ideas] on the spot,” Moore says. “We just celebrated Dr. Seuss’ birthday and so there were a lot of rhymes that came to me then.”

One of the brightest songs on Back to the Future is called “Star Wars” and it’s not hard to imagine a classroom full of kids singing and bouncing along to the tune, which strings together Spider-Man, light sabers and UFOs in the lyrics. Moore says that fellow teachers and other pupils have picked up on his life as a hip-hopper and frequently ask when he’s going to be in the studio again.

He says he has put down 75 possible titles for his next CD. Moore likes concept records where he can address big topics with several songs.

As for his musical likes, “I like what Lil Wayne is doing. I am really listening to a lot of ’80s music right now. I like Hall and Oates and Lionel Richie.”

Moore says Cloud Nine might be in the lead for the title of his next CD.

“Yeah, I like that,” he says. “I could build everything around a weather theme.”