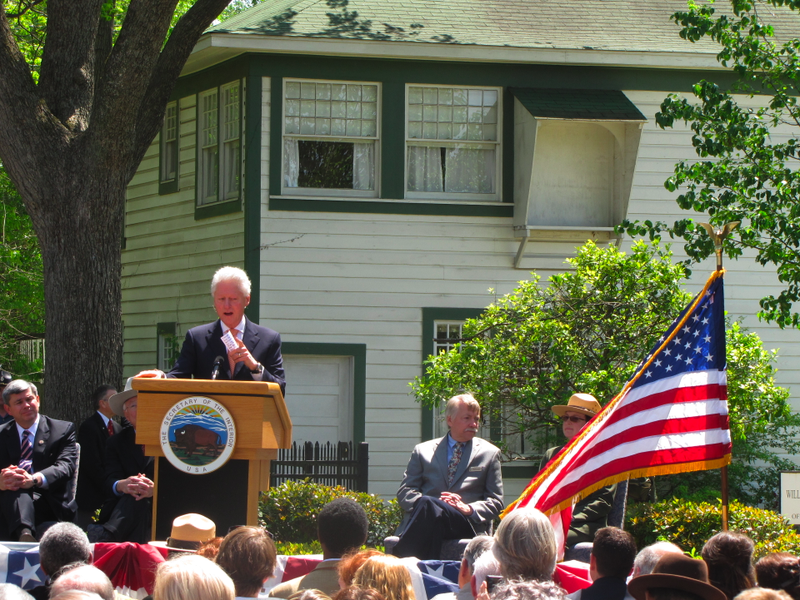 Former President Bill Clinton gives a speech Saturday during the dedication of his childhood home as a national park.

The two-story white house with green trimming, located at 117 South Hervey St., served as a backdrop as Clinton shared some childhood memories, thanked his hometown supporters, accepted an honorary designation as a National Park Service ranger and offered a few jokes when a nearby passing train interrupted his speech.

"The most important thing I can say to all of you today is 'thank you,'" Clinton told a crowd of about 350 people gathered in the home's backyard. "And I hope some of the good I got out of being here will be somehow communicated to the people who come."

The park is one of more than 30 presidential sites across the country, ranging from the White House itself to Mount Rushmore. It becomes the 394th national park.

Clinton's boyhood home has been open to the public since 1997, but the park service took control of it late last year.

Clinton thanked Ross, who told the crowd he worked for 10 years to get the historic site designation passed through Congress. President Obama signed the bill making it such a site in 2009.

"Only in America can you go from living in a small white house at 117 South Hervey Street to residing in our nation's White House at 1600 Pennsylvania Avenue," Ross said in his remarks to the crowd. "It is a story that defines who we are as a people and as a nation. This house is where President Clinton grew up to become one of the most successful presidents in U.S. History."

Clinton credited his boyhood in small-town Hope with helping him become president, noting he grew up without a television and valued conversing with the people around him.

"The one thing I learned living here is that arithmetic and governance and the aspirations of ordinary people are way more important than anybody's ideology," Clinton said.