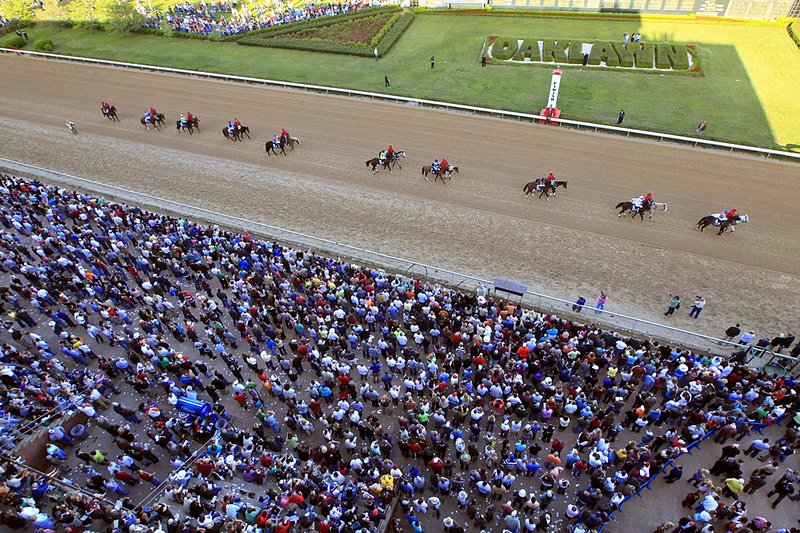 A large field of 13 horses parade in front of a packed grandstand before running in the Arkansas Derby at Oaklawn Park on Saturday.

Saturday’s season-high crowd of 62,364 boosted average daily on-track attendance to 11,649, based on figures released each race day by the track.

That represents a 0.6 percent increase over last year.

General Manager Eric Jackson said he was pleased with the numbers, especially since Oaklawn endured a record eight weather-related cancellations in January and February.

At one point, Oaklawn had raced 10 days and lost eight to the harsh winter weather.

“We came out of that and had a pretty good meet and some excellent racing,” Jackson said. “I think we’re pretty pleased.”

Oaklawn will reopen Wednesday for simulcasting.

Clearly, the biggest story was Lukas, 75, who is believed to be the oldest person to win an Oaklawn training title.

Lukas, who was inducted into the National Museum of Racing and Hall of Fame in 1999, finished with 27 victories from 126 starters.

Allen Milligan, Oaklawn’s leading trainer in 2009, was second with 24 victories.

Lukas clinched the title when Key Largo, trained by Milligan, was scratched from Saturday’s seventh race.

Lukas was also Oaklawn’s leading trainer in 1987 with 35 victories. The 24-year gap between titles is an Oaklawn record.

It was the first training title for Lukas since the Turfway Park fall meeting in 2005.

Lukas got some muchneeded breathing room when he saddled two winners Wednesday - Delong Road and TidalPool in the $100,000 Redbud Stakes for older fillies and mares.

“He’s had a great year,” Scott Ford said following the Redbud. “We were trying tofind something else that we could run to help him. He was like, ‘I don’t care about that.’ We were like, ‘No, no, we’ll run one down at a cheap price, a good horse in a claiming race.’ We wanted to see him win it.”

Lukas won the title despite starting 95 fewer horses than Milligan.

It was the first Oaklawn riding title for Berry, 48, who finished fourth behind Thompson in last year’s standings.

Thompson was trying to become the first jockey to win three consecutive Oaklawn riding titles since Pat Day won a record 12 in a row (1983-1994).

(Richard and Karen Papiese) was the meet’s leading owners.

Midwest, which leans heavily on claimers, led the country in victories last year with 310.