Pigeon disasters give wing to theory 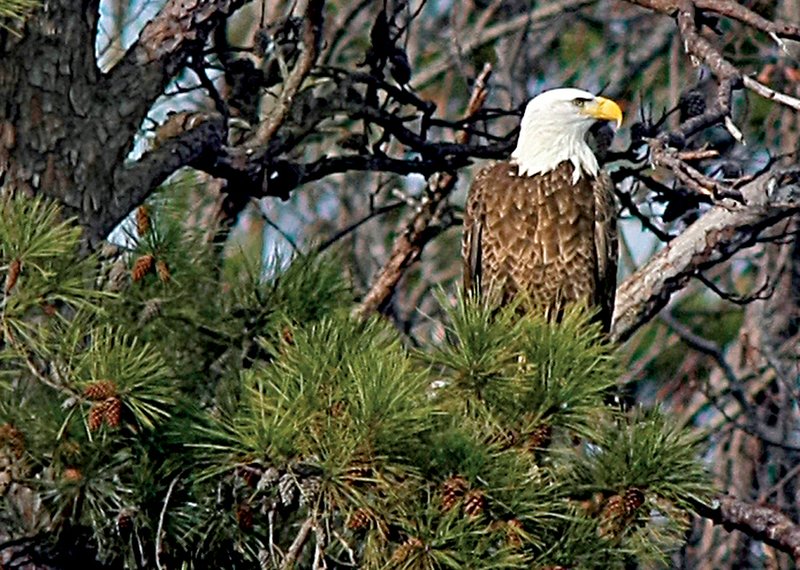 Migratory bald eagles return to the same lakes — and perch in the same trees — so predictably that park rangers who lead eagle watch cruises know where to steer their boats so visitors can spot the big birds. This pine on Lake Maumelle is one such eagle-favored tree.

And they’ve navigated with such precision - despite lengthy journeys with no maps - that they return to the same park, the same yard or even the same tree.

Do they hear their way home?

“They are imprinting on the characteristic sound” of where they live, he told a crowd at the survey’s headquarters in Menlo Park, Calif. “The terrain has characteristic frequencies. I think that is the sound they are listening to.”

He thinks that birds perceive the world as a vast sonic environment, hearing many frequencies bouncing off different landmarks, such as mountains and buildings, generated by the earth’s movement.

It has long been known that birds use celestial and magnetic compass senses to orient their flight. But how do they determine their location, so they can select the correct homeward bearing? That remains controversial.

Humans can’t hear infrasound, but birds can. These very low-frequency acoustic waves come from different natural sources, but particularly the subtle tremors of the earth’s crust - so each part of the planet has its own distinct “sonic signature.” And these infrasonic sounds travel thousands of miles, far longer than ordinary sound waves.

The finely calibrated and seasonal pull of migration is a longstanding mystery, especially to those of us who manage to miss well-marked exit ramps on the highway.

A creature weighing mere ounces can fly thousands of miles, through darkness and storm, then land at our modest feeder.

“Site specificity is fascinating,” said Bob Power, director of the Santa Clara County Audubon Society. “Birds return to the exact same backyard, or corner of the park, year after year. Anybody who has had a bird that disappeared for six months, and returned in the exact same spot, has to be puzzled. How do they do that?

“Many, many theories, from many different experts, have been put forth,” he said.

Birds wintering down in South America are unlikely to hear the sounds of their final Bay Area destination thousands of miles away, Hagstrum said. Rather, he proposes that they break up their journey into sections - then fly from one distinctive set of sounds, or “wave points,” to another.

Because they fly in flocks, younger birds learn these distinctive wave points while traveling with their elders. And when they get lost, they circle, perhaps to re-orient what they’re hearing, he said.

Hagstrum was intrigued by pigeon-racing disasters and, in his spare time, decided to investigate what went wrong.

The most infamous incident took place on June 29, 1997, at a celebration of Britain’s Royal Pigeon Racing Association’s 100th anniversary. More than 60,000 trained birds - the best of the best - were released from southern France. Then, the crowd anxiously awaited their arrival home in southern England.

Just a few thousand of the birds were ever seen again.

What happened? Pigeon fanciers fear losing one or two birds, but tens of thousands?

Hagstrum noticed a curious coincidence. That same morning, the Concorde supersonic transport plane was flying across the English Channel en route to New York from Paris. But its departure time was 8:30 a.m.- far earlier than the birds’ 10 a.m. release time.

Phoning the Concorde office, he asked: “Was your plane late that day?” Their response: “Are you a magician?It was two and a half hours late!”

“It was probably the most exciting moment of my career,” he said. “I realized I was onto something.”

He has analyzed three other botched races and also found sources of interrupted infrasonic sound waves.

While sight and probably smell are useful for local orientation by pigeons, it is unlikely to help long-distance travel, Hagstrum said. Studies show that pigeons can find their lofts even when wearing frosted contact lenses. Secondly, they can’t smell very well. And although wind-borne odors could be brought from afar, it is difficult to imagine how birds, especially in a tail wind, could navigate accurately using odors delivered on variable winds.

He also dismisses the magnetism theory. While the magnetic sense of birds provides an excellent compass for orientation, geomagnetic fields make poor maps, he said. Research shows that pigeons usually depart from the release site in the direction of their home loft - and follow nearly straight-line courses along the way that are inconsistent with magnetic field gradients.

Much work remains to be done, he said. Hagstrum, who studies the earth ’s magnetism in his day job as a geophysicist, hopes to publish the findings of his pigeon hobby in a peer-reviewed scientific journal within a year.