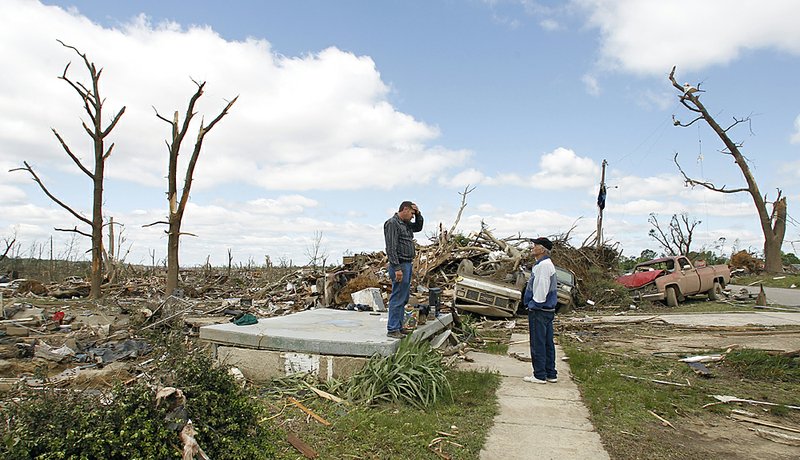 Billy Burns stands on his front porch talking to a neighbor after a tornado hit Pleasant Grove just west of downtown Birmingham yesterday afternoon on Thursday, April 28, 2011, in Birmingham, Ala.

LITTLE ROCK — Angela Kelso and Clayton Smith got married Saturday and all the spoils of their wedding - Tupperware, wineglasses, a fancy vacuum still in its box - were packed in their modest rental home in Tuscaloosa, Ala.

Kelso, 22, had been watching news of the coming storm all day Wednesday and was home from her graphic design job by 3:30 p.m. Her husband, 23, was just minutes away at his ROTC class on the University of Alabama campus.

Kelso played in the yard a while with Allie, the couple’s pit-bull mix. But soon it was apparent that something bad was headed her way.

“The power went out.There was no more TV,” she said. “And I knew I was in trouble.”

Her father-in-law called and told her to get into a safe place and cushion herself with some pillows.

She retreated to the tiny closet in the master bedroom, crouched low, with Allie in her arms, like a baby. The closet was so small she couldn’t close the door all the way, but she pulled it as tight as possible.

Kelso could feel things falling around her, the floorboards were ripping away during the storm.

When she lifted her face from the pillow and looked up, the closet door had swung open. She saw clouds and a blue canvas above her, the roof was gone; windows smashed out. She didn’t see her bed. In the front, the big magnolia tree, just about to flower, was stripped of every leaf.

She jumped out of a low picture window that was now without glass. “The best thingwas seeing all of the people alive who were standing there,” she said.

Smith walked for blocks through the mess - trees fallen, the Chevron station twisted, the mattress store a filthy ruin.

The house was just walls and piles of brick, their belongings now junk. School textbooks and notebooks littered the floor. Everything was spattered with mud. For blocks it was the same.

Hours away in Atlanta, John Hill was on the phone with his son, Beau, as the mile-wide tornado that tore through Kelso and Smith’s home and would claim the lives of 36 people approached Tuscaloosa. Then, the connection went dead.

Repeated calls got no answer from the University of Alabama sophomore. So the metro Atlanta resident got inhis truck and headed west.

“I kept thinking I was being crazy because I was headed into the storm, but if you have kids you understand,” Hill said. “Helpless doesn’t describe that sick feeling when you are so anxious because of not knowing.”

After about five hours, Hill finally reached his son on the phone. Beau and a friend escaped injury by ducking into the clubhouse of their apartment complex, which was left standing in widespread destruction in the western Alabama city of about 90,000 people.

The University of Alabama campus was untouched, but a few blocks away, bustling 15th Street was reduced to rubble.

The scene greeted Hill when he arrived in Tuscaloosa in the early morning hours, finally reuniting with his son around 5 a.m.

“It looks like a mile-wide bomb was dropped down,” he said.

In Smithville, Miss., a similar scene greeted parishioners of Smithville Baptist Church, a red-brick building with about 350 members in the northeastern Mississippi town where at least 13 people were killed.

Entire sections of the building are flattened. The second story is gone. A cadaver dog looked for bodies in the rubble. But the choir robes were untouched.

“They’re perfectly white,” Wes White, the pastor, called out Thursday when he discovered the robes as he sifted the wreckage.

White said residents from a nearby mobile-home park knocked on the church door just before the storm hit, asking for shelter. They went to a sturdy section of the church where they clung to one another and anything they could grab “like a mass of humanity” as the building disintegrated.

The red Jeep that some mobile-home residents had driven to the church was left on its side inside the church office.

“You can’t just bring in some generators and fix something like this. You can’t just put up a tarp. There’s nothing left. We are going to have families displaced for a long time,” White said.

“How do you reconcile something like this? It’s not possible. But there are truths in life. There’s a God whoseways are higher than our ways. And if you don’t have faith, you don’t have anything.”

In Elmore County, Ala., storm winds carved out more than a mile of destruction in the rural community of Eclectic.

“Whatever it was, it was huge and it stayed on the ground for a long time,” said Sarah Stephens, who spent most of Thursday helping residents there, several of whomtook shelter in homes that are now only foundations.

Stephens, the editor of the Millbrook, Ala., Independent and a former central Arkansas newspaper editor, estimated at least 50 buildings were demolished when the storm blew through about 9 p.m. Wednesday. That included the Mount Gilead Primitive Baptist Church where only two of its walls poked up next to an aging cemetery, she said.

“Several of the tombstones that were a hundred years old were literally cracked in half,” she said.

In Trenton, Ga., LarryMoore spent Thursday cleaning up the remains of his funeral home, even as phone calls came in to handle final arrangements for the storm’s victims.

Moore Funeral Home has been in Moore’s family since 1945. On Thursday, a small bulldozer pushed snapped timber supports, insulation and roofing shingles into a dump truck while workers swept up glass from blownout windows and collected computers and records from an office littered with debris.

“We had just remodeled two years ago: new furniture, new carpet. The only thing not damaged is our grandfather clock,” Moore said.

At least two people were killed in Trenton’s Dade County, which borders Tennessee and Alabama in the far northwestern corner of Georgia. Moore said he has received calls to handle services for at least two killed in the storms and he expects more calls. Moore owns another chapel a few miles away that he plans to use.

The funeral home’s shelter might have saved the lives of one family. The woman who cleans the business called Moore after storms uprooted trees in her yard. She and her two children took refuge in the funeral home’s basement.

“That’s what saved her, I guess. It was over in just a matter of seconds. She called 911 and emergency crews had to help her get out,” Moore said. “Her dinner was still sitting on the cafeteria table when we got here today.” Information for this article was contributed by Chad Day of the Arkansas Democrat-Gazette; by Richard Fausset of the Los Angeles Times; by Christian Boone of The Atlanta Journal-Constitution and by Michelle Williams in Trenton, Ga., Holbrook Mohr in Smithville, Miss., and John Zenor in Montgomery, Ala., of The Associated Press