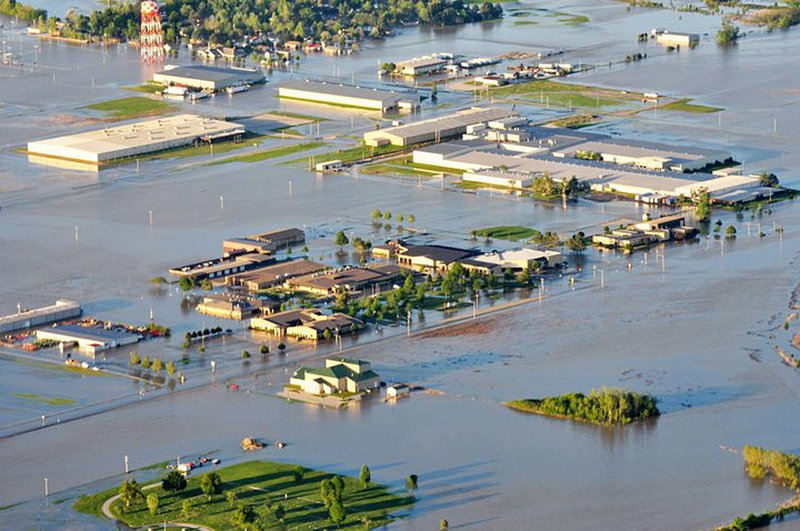 “I think it caught us off guard,” Pocahontas Mayor Frank Bigger said of the rising water in southern Randolph and northern Lawrence counties.

“Five miles south of town, water’s 2 to 3 feet over the road. It came up so sudden.”

Meanwhile, other areas began to see some relief Friday from the flooding triggeredby nearly 10 inches of rain in some areas during a series of storms that also spawned deadly tornadoes.

The storms’ death toll in Arkansas rose to 14 Friday, when Arkansas Department of Emergency Management spokesman Tommy Jackson said a Garland County resident whose name was not released died as the result ofa medical emergency during Monday’s storms.

Between Pocahontas and Portia on Friday, emergency workers used boats and farm tractors to rescue families stranded in their rural homes by 2 to 3 feet of water.

Tornado and storm videos and more

“The road had waves gushing over it,” said Christy Gosha, an employee of Latham Grocery in Portia, who drove to work on U.S. 63 from herHoxie home Friday morning.

The levee also broke in 2008, but only an apartment complex east of the Robil subdivision fell victim to that flooding. Afterward workers rebuilt the levees, adding about 2 feet of soil.

But more sections of the Black River levee and a part of a levee protecting the Running Water Ditch south of Pocahontas gave way Thursday and Friday, Bigger said.

“You couldn’t count the number of [levee] breaks,” said Bigger, who flew over Pocahontas on Friday in a helicopter with Gov. Mike Beebe to assess the damage.

On Wednesday, Pocahontas had police order mandatory evacuations of the subdivision, but several refused to leave.

A levee along Pace Street broke later in the day, releasing about 8 feet of water into the area. Randolph County sheriff’s deputies boated in to rescue those who remained, including McCandless.

Keith Richardson, who lives in Pocahontas along the southern banks of the Black River, was also forced from his home this week.

Richardson, who has lived along the Black River for 50 years and has chronicled its history for a newspaper, said he thinks the record-level waters will further compromise the levees.

“As long as the water stays there, the water’s going to work on those levees,” he said. “The river will go where it can.”

Inside Pocahontas, the Black River began receding Friday - in part because of the levee breaches - dropping from a record 28.47 feet to 27.45 feet at 3:45 p.m.

“It’s going to be a very, very slow fall,” she said of the Black and White rivers. “There’s so much water in the system.”

An additional 3 to 4 inches of rain forecast to drop in northeast Arkansas between today and Wednesday could aggravate the situation.

“What can’t get into the ground will run into the rivers,” Lasko said.

While some rivers in northeast Arkansas are receding, the Mississippi River is expected to reach near-record levels. The river is predicted to reach 53.5 feet in Vicksburg, Miss., on May 18, the highest level recorded since 56.6 feet set during a 1927 flood.

Farther upstream, the riveris expected to crest at Osceola at 45.5 on May 8. Flood stage there is 28 feet.

“If the Mississippi River gets too high, waters from the other rivers can’t flow into it,” Lasko said. “Some areas could see a secondary rise in their rivers because of it. We’re nowhere near drying out.”

Because of the Mississippi River flooding, the Mississippi Gaming Commission has ordered closure of all nine casinos in Tunica by Sunday. The casinos may not open again before May 24, when the river is expected to crest in Memphis, said Webster Franklin, president of the Tunica Convention and Visitors Bureau.

“This is unprecedented,” he said of the closings. “When the water recedes, we’ll go back and clean it up.”

He said the closures would affect 9,600 casino employees. Mississippi will also lose about $10 million in gambling-tax revenue, and hotels will lose an estimated $6.5 million, he said.

South of Pocahontas, water cascaded over U.S. 67 and followed a series of agricultural drainage ditches southwest toward Portia and Hoxie.

“There’s water all over,” Lawrence County Sheriff Jody Dotson said. “It’s all coming down from Pocahontas to us.”

“I think the worst is over for us,” Bigger said in Pocahontas. “It’s headed down south of us.

“I’ve never seen anything like this before, and I’ve lived here all my life,” he said. “At least we’ve not had any injuries or loss of life. We’re lucky.” Information for this article was contributed by Claudia Lauer of the Arkansas Democrat-Gazette.