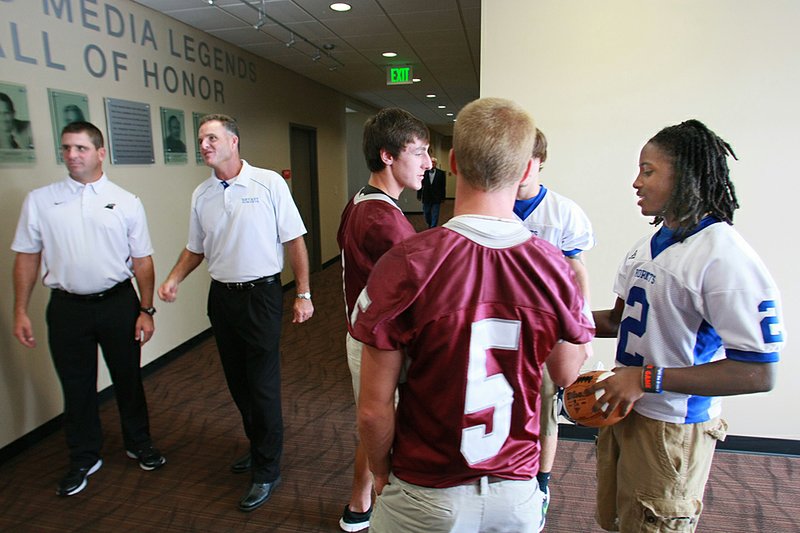 Benton Head Coach Scott Neatheri (left) talks with Bryant Head Coach Paul Calley as their players', Benton's Brooks Balisterri (left) and Caleb Davis (center, front) meet Sawyer Nichols (center,back) and Dillion Winfrey (far right) at an event Friday to promote the Salt Bowl. the bowl is a game between the two schools and will be Sept. 2, at War Memorial Stadium.

LITTLE ROCK — There should be plenty of hearts beating during the 12th annual Salt Bowl between Benton and Bryant on Sept. 2 at War Memorial Stadium in Little Rock.

Salt Bowl officials began their push for a record-breaking crowd of 30,000 with a news conference to promote the event Friday afternoon at War Memorial.

“One of these days, I know we’re going to do that,” said Shane Broadway, a 1990 Bryant graduate who is a Salt Bowl spokesman and the interim director of the Arkansas Department of Higher Education

The theme for this year’s Salt Bowl is “Where is Your Heartbeat?”

The goal is 30,000, an attendance figure that would shatter the previous record for an Arkansas high school football game.

The Salt Bowl drew a record crowd of 26,316 in 2009, topping the previous mark of 25,386 for the 2005 Class AAAAA state championship game at War Memorial between Springdale and West Memphis.

Benton and Bryant, bitter Saline County rivals, have opened the season every year against each other at War Memorial since 2004.

“It’s crazy,” Bryant senior wide receiver/cornerback Dillon Winfrey said, describing the atmosphere. “You want to win, but at the same time you’re glad to be here.”

Benton leads the overall series 24-13-1, but Bryant has won five consecutive meetings, is 8-2-1 in Salt Bowl matchups and has outscored Benton a combined 83-16 the past two years.

But Benton Coach Scott Neathery said he believes his team will be more competitive next month.

“We are a much better team than we were last year,” said Neathery, a former Bryant assistant who will be seeking his first victory in the Salt Bowl.

Bryant Coach Paul Calleyis 62-27-3 in eight seasons with the Hornets. He is 6-2-1 against Benton.

Bryant (Class 7A) and Benton (Class 6A) have been tentatively placed in the same conference (7A/6A-South) for the 2012-2014 cycle, a move that threatens the Salt Bowl being played as the season opener.

Calley said officials at both schools want to retain the season-opening date, but that would require finding two members of another conference willing to move their conference game to Week 1.

“We’re going to have to wait until the conference schedules come out,” Calley said. “We going to have find somebody, enough of a rival, that theywant to play first.”

Benton and Bryant faced the same situation two years ago after being placed in the same conference.

But an appeal by Searcy shifted six schools, including Bryant, from their original conference assignments and the Hornets were placed in the 7A/6A-Central, while the Panthers stayed in the 6A-South.

Before Searcy won its appeal, then-Bryant Athletic Director Tom Farmer was working to keep the Salt Bowl as the season opener by wanting Little Rock Catholic and Little Rock Central (both members of the 7A/6A-Central) to open the season against other.

Bryant would have then played Catholic and Central would have met Benton in nonconference games later in the season.

The Salt Bowl, however, could benefit from a push by Siloam Springs to create two Class 6A conferences in football only and have those schools compete for a state championship.

If Siloam Springs is successful, it would keep Benton and Bryant in different conferences in the upcoming cycle and the Salt Bowl as the season opener.

Siloam Springs’ appeal is scheduled to be heard by the Arkansas Activities Association’s 19-member board of directors next month.

WHAT Bryant vs. Benton

a commemorative “Where is Your

locations in central Arkansas and the

athletic director’s office of both schools

TICKETS AT THE GATE $8

NOTE Benton is the home team this year

and its fans are asked to sit on the west