3 freed hearkens back to 3 slain 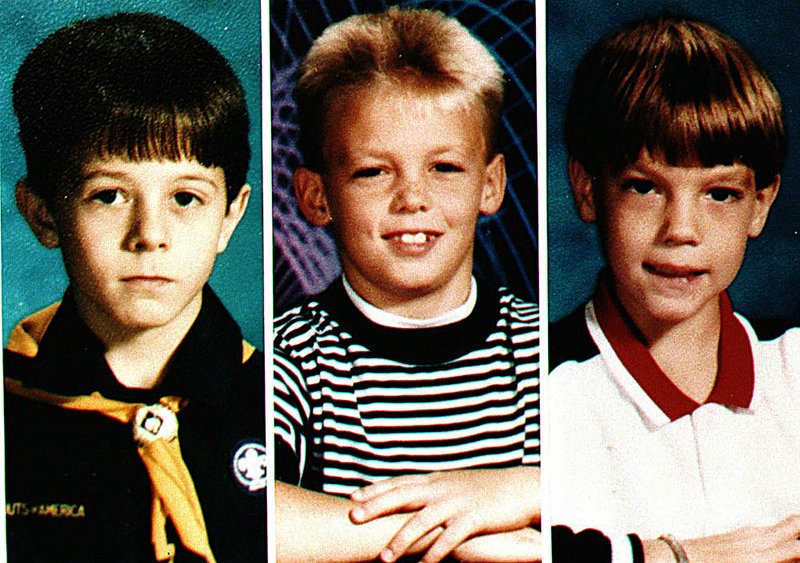 WEST MEMPHIS — At Weaver Elementary School, a small gazebo stands testament to the memory of three 8-year-old boys who once romped across this empty playground.

Broken glass and a dirty, discarded brown shirt lie near a memorial between two benches.

Stamped into the red brick and concrete is the Cub Scout motto: Do Your Best.

The memorial and its gazebo were erected 18 years ago to honor three young Cub Scouts who were hogtied and beaten to death after they rode their bicycles into a small patch of woods known as Robin Hood Hills.

Neighborhood children loved playing there and often ignored their parents’ orders to stay out.

A favorite game was “army.” And an array of bumpy trails made for adventurous cycling.

The trees of Robin Hood Hills disappeared years ago.So did the three boys’ parents, who, after their sons’ murders, moved away from these middle-class homes with their tidy, green yards.

Gone, all of them, and nearly forgotten.

Everyone knows, though, about the three men accused of killing the children.

The men have always maintained their innocence, saying their trials were flawed by bad evidence and jury misconduct.

On Friday, they walked out of a Jonesboro courtroom free men.

The three had struck a deal with state prosecutors, who had come to believe that not only would Echols, Baldwin and Miss kelley be granted new trials, but that the long passage of time would likely make convictions difficult.

The trio entered Alford pleas, which allowed them to plead guilty to lesser charges of murder, while still proclaiming their innocence.

Yet again, the national and international media descended on Jonesboro.

On Saturday, the city was still abuzz with talk of the men’s release.

Few, however, talked of the boys who died so very long ago.

Had they lived, these children would now be 26 years old.

But in their parents’ recollections - which remain vivid even as the town's collective memory has faded - the three boys still boast scabbed-over knees and popsicle-stained hands.

The three boys went to school together, played together and breezed together through the neighborhood on their bicycles.

But each possessed smiles, charms and quirks that distinguished him both in life and death.

“Worm” - so named for his wiggly nature - would talk your ears right off.

His stepfather, who adopted him at age 3, made his new son a tiny gold ring that resembled a worm. The little boy loved his ring but was allowed to wear it only on Sundays for fear he’d lose it.

He collected all of the Teenage Mutant Ninja Turtles and dressed up as one for Halloween.

The man who’d adopted him gave the boy a new middle and last name, hoping that would further cement them as family.

People said they looked alike, but when the dad looked at his boy, he saw his wife’s brown doe eyes looking back at him.

Even at age 8, the boy still believed in Santa and the Easter Bunny.

One of his close friends, a schoolmate known for wearing neatly pressed shirts and Sunday ties with over-sized knots, often came over to play.

The boys’ parents agreed that it was a good thing the two weren’t in the same class at Weaver Elementary because they often tumbled into trouble together.

A third boy eventually joined the group. His nickname, “Frog Legs,” originated from the plunge he took into a lake as a baby. Everyone remembered how he popped to the surface with those chubby legs churning.

His blond hair was usually spiky. His mother told people who didn’t know her son to look up at a brilliant blue sky.

“That’s the color of his beautiful eyes,” she always said.

On the last day of his life, he walked home from school with his mother, then straddled his red bicycle, and he, along with his two friends, vanished.

Police would later find the children’s bodies - nude, hogtied and battered - in a water-filled ditch near Robin Hood Hills.

Longtime residents of West Memphis, once consumed by fear and grief over the children’s deaths, say the controversy over the men’s convictions has overshadowed the deaths of the boys.

Annette McCollum, 43, used to watch the three 8-year-olds ride their bicycles by her house.

“You’ve taken 18 years of emotion and drive away from the situation,” says McCollum, who has since left the boys’ neighborhood.

Just a few hundred yards away, nearly all the physical markers of the case are gone.

The Blue Beacon Truck Wash is now a horse shoe shaped slab of cracked concrete and asphalt encircled by a chain-link fence overgrown with weeds and trees.

The ditch where the children’s bodies were found is gone - as is the tree cover that once made Robin HoodHills an appealing playground for children but a challenge for investigators.

Sonny Ricks, 76, a longtime West Memphis resident, says he, too, has focused only on those accused of killing the boys.

The first story that springs to his mind is the time he ran Echols and other kids off after he found them sitting on an air conditioner at a softball field in the early 1990s.

In a Memphis cemetery, a grave marker bears the date for an 8-year-old boy’s passing. A single vase of flowers adorns his grave. Weeds have crept across the engraved name.

Across the Mississippi, under a late-afternoon Saturday sun, an aging oak tree drapes a shadowy veil across the grave of the boy known for his neat attire and ties.

Here, in this Marion cemetery, a single vase of faded silk flowers adorns the dirt smudged engraving on his gravestone, which shows the date of his death to be May 5, 1993.

In Missouri, a third gravestone marks the death of a child on that same date.

His grandmother suggested the inscription for his monument: Here lies a little rosebud in the flower garden of heaven.

And in West Memphis, underneath the gazebo on a deserted playground, one can still find the names of three boys whose lives and deaths have long been overshadowed by an 18-year court battle:

“Worm,” who still believed in Santa.

A somber-faced child known for his quirky ties.

And “Frog Legs,” the boy with the sky-blue eyes.