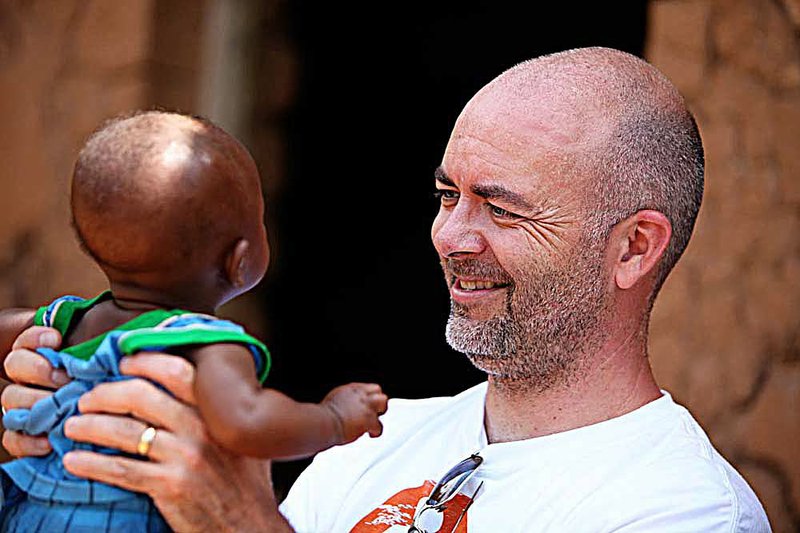 LITTLE ROCK — Life is different now for the Raymond family. In August they packed up and traveled thousands of miles from all that was familiar in Bentonville to start a new life in Rwanda, Africa. They left behind family, friends and their church all in the hopes of helping children suffering from malnutrition.

Bret Raymond had seen the effects of hunger firsthand while working in Africa years ago and was inspired to join his friend Mark Moore in helping start MANA (an acronym for mother administered nutritive aid). The goal of the organization is to produce a fortified peanut butter specifically designed to combat severe acute malnutrition.

The magnitude of the problem hit home for Raymond when he discovered that, according to the Rwandan Ministry of Health, more than 30,000 children in the country were severely malnourished.

Looking at his own three children, Raymond knew he had to help the children of Rwanda, and to do so the family needed to be in Africa.

According to UNICEF, about half of children under age 5 in Rwanda are chronically malnourished. Worldwide, the number soars to 200 million children. A third of all early-childhood deaths are caused by malnutrition. The organization advocates ready-to-use therapeutic foods, such as those provided by MANA, as the best option for at-home treatment.

MANA’s goal is to reduce the number of malnourished children by providing the ready-toeat food packets to health clinics and hospitals. They plan to do so by establishing production facilities in the United States and Rwanda.

Since arriving in Rwanda Raymond has been laying the groundwork for the MANA operation there. After weeks of searching, he finally found a facility to use for production of the fortified peanut butter and he hopes the plant will be operational by the third quarter of this year. Plans to are to make about 550 tons of the malnutrition treatment a year.

Raymond traveled to Copenhagen in October to discuss ready-to-use therapeutic food with officials at UNICEF, as well as the needs in Rwanda and surrounding countries.

“They asked that we design our facility to serve the needs of Rwanda, Burundi and eastern Congo, something we are excited to do,” Raymond said. “There are more than 100,000 children annually in this region who suffer from severe acute malnutrition.”

Even though the facility isn’t finished, Raymond and MANA are already making a difference in the fight against malnutrition. With the approval of the Ministry of Health, MANA has partnered with the Rwaza Health Center in the northwest area of the country. The organization is providing the peanut butter to several children with severe acute malnutrition. They delivered the first shipment of peanut butter to patients last month. For now they are using a partner facility in Illinois to provide the food. A MANA facility in Georgia is expected to open next month and will provide for the needs in Rwanda until the in-country plant is ready.

After months of work, Raymond was finally able to put the peanut butter in the hands of those in need.

“This has definitely been the highlight of MANA’s work in Rwanda so far,” Raymond said.

Raymond said 15 children ages 7 months to 2 years and their mothers came to the health center, first to taste the peanut butter and provide feedback on the product. The mothers were then sent home with a one-week supply to feed to their children. Each Thursday the parents return to the health center with their children for a checkup, where they are evaluated to see if they are improving. The course of treatment is usually six weeks.

“After just a few weeks, the results have been amazing,” Raymond said. “One such story is about a 15-month-old boy named Egide. Before he started taking MANA he was unable to pull himself up to stand. After just four days ... he had enough energy to stand.”

Another child, Jean Marie, had discolored hair due to vitamin and mineral deficiencies. The 12-month-old also had trouble crawling.

MANA is documenting the children’s progress on their YouTube channel (youtube.com/mananutritiveaid) so supporters can see the group in action.

“It’s fantastic to witness this in person,” Raymond said.

For Raymond, the process of getting the operation started hasn’t always been easy or fast, but it has been rewarding.

“Most of the challenges come in trying to understand how business is conducted here and the fact that many business meetings are conducted a third in Kinyarwanda [the local language], a third in French and a third in English ... sometimes all in the same sentence,” he said, adding that he has taken a keen interest in improving his French.

The family - Bret and his wife, Johanna, and children Isaac, Anna and Luke - are adjusting to life in Kigali, a city of about 1 million. They’ve found that some things are the same as back home in Arkansas, while others are vastly different. Shopping, for example, can be frustrating.

“I went to nine stores across town today to get what I could have done in one trip to Wal-Mart,” Raymond said. “That just speaks to the overall difference. Life is more convenient in Arkansas than in Kigali. It takes three times as long for any task in Kigali.”

Gasoline prices are high in Arkansas but more than $6 a gallon in Kigali. Shopping for food is also different. The family buys raw milk and pasteurizes it at home three times a week, and they are enjoying locally grown produce, Raymond said.

Isaac, 8, however, misses the waffle fries from Chickfil-A and dumplings from P.F. Chang’s.

“I also miss snow,” he said. “It’s always sunny and warm here. And I miss my grandparents in Arkansas and Ohio.”

Navigating the roads of Kigali has also been a challenge, including learning to drive on the left side and getting familiar with traffic circles. Early on in their Rwandan relocation, Raymond inadvertently caused a security alert by cutting into the presidential motorcade in a traffic circle.

“It was a bit interesting when the policeman forced me to stop and walked toward my truck with his hand on his hip,” he said. “But he was very nice - not amused, mind you- and let me go without any problem. I’ve since learned to watch out for the smoke gray Toyota Land Cruisers with flashers blinking.”

Much is the same, too. Kigali, like Bentonville, attracts people from all over the world for jobs, including other Arkansans.

Rwandan children are far more likely to be undernourished than American children - while kids in the United States are sometimes overnourished.

But due to dietary imbalances, about 1 percent of U.S. children have chronic malnutrition, according to the Johns Hopkins Children’s Center.

“It’s interesting to observe that children from the U.S. and Rwanda both suffer from malnutrition,” Raymond said. “It just comes in different forms, but both have disastrous long-term consequences for the individual and the country.”

Information, including a diary of the Raymond family’s experiences in Rwanda, are available online at mana nutrition.org.