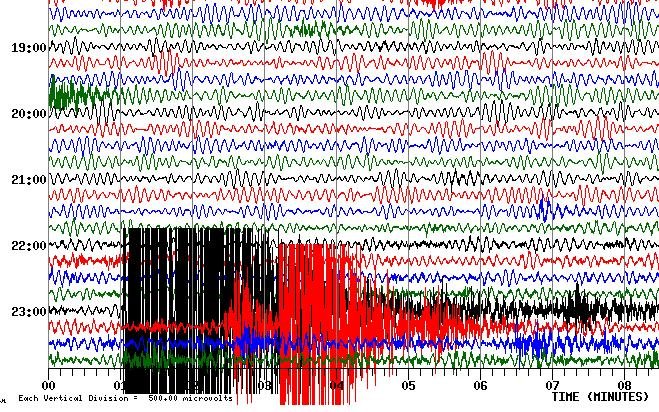 LITTLE ROCK — A 4.7-magnitude earthquake felt throughout the state and beyond late Sunday night appears to be the biggest temblor in Arkansas in more than three decades.

Scott Ausbrooks, the geohazards supervisor for the Arkansas Geological Survey, said the shaking was the most intense of nearly 800 small earthquakes rumbling out of Faulkner County since September and ties a 4.7 quake recorded in 1976. The 4.7-magnitude is still preliminary, but Ausbrooks said Monday it was a "low-end" estimate and it is not expected to be downgraded.

Join the discussion on our Facebook page and tell us what it felt like where you live.

The quake was centered near Greenbrier, where much of the seismic activity has occurred in the past six months. The shaking was felt far and wide this time, with thousands of people from Arkansas, Missouri, Oklahoma, Tennessee and Mississippi reporting feeling it.

"We're at our historical max right now," Ausbrooks said. "In other words, based on history, we wouldn't expect anything larger than what we've seen or much larger. But looking at the fault, theoretically, if it ruptures at once, we could see a 5.5 (magnitude quake)."

Ausbrooks said that size of a temblor could damage chimneys and poorly constructed buildings. Such a quake isn't expected and anything larger than that is "very unlikely" but not impossible, Ausbrooks said. 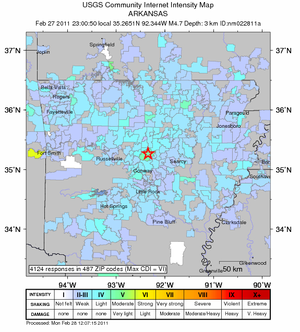 There were no reports of serious damage in Greenbrier, which sits 4 miles southwest of the quake's epicenter. Dispatchers there said the shaking lasted about two seconds and caused a small crack in one police officer's wall and knocked another officer's television over.

Ausbrooks said there were also reports of a broken window, items knocked off shelves and cracks in plaster walls in Greenbrier and areas just north.

The shaking occurred just after 11 p.m. and was followed by two more earthquakes: a 3.8-magnitude rattler about 15 minutes later and a 3.6 quake around 2:45 a.m. A 3.2 quake was recorded shortly after 7 a.m.

Geologists are working to determine if the activity - dubbed the Guy Swarm - is caused by pressurized liquid injected into the ground by natural gas drillers or if it is a natural occurrence.

The Survey also recorded other earthquakes last week that weren't felt by residents.

Scientists recorded at least 10 quakes Friday, beginning with one registering 2.4 in magnitude at 1:10 a.m.