End of the line? Favre inactive for season finale 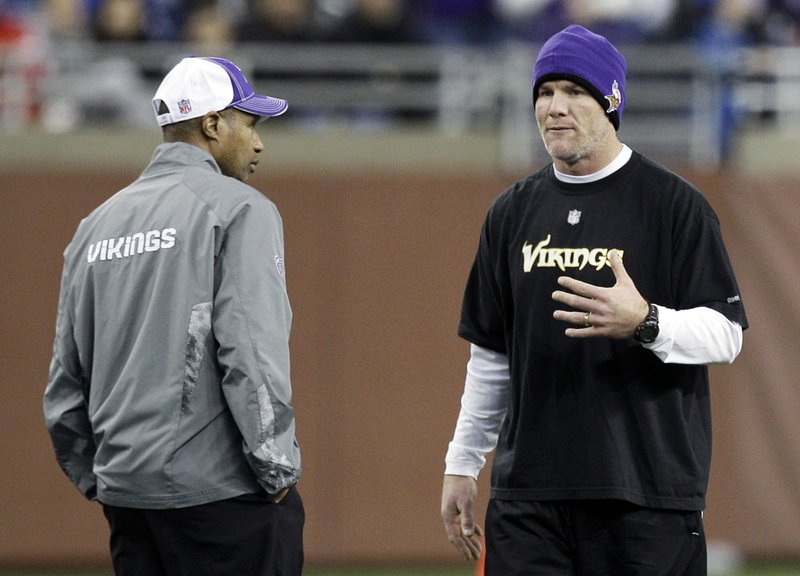 Brett Favre’s career apparently ends with him on the sideline.

The 41-year-old quarterback is sitting out Minnesota’s game at Detroit. The Vikings declared him inactive about 80 minutes before kickoff Sunday, concluding days of speculation over whether he could sufficiently recover from his Dec. 20 concussion. He also missed Minnesota’s previous game at Philadelphia.

Favre’s record streak of starts ended Dec. 13 when he sat out the Vikings-Giants game because of shoulder problems. That game was played in Detroit because the Metrodome roof collapsed. The Vikings are back in town Sunday to face the Lions but will again be without Favre.

Favre has come out of retirement before but has said repeatedly this season is his last. And this season — his 20th — has been a rough one.

He’s thrown for 11 touchdowns and 19 interceptions, and the Vikings could finish tied for last place in their division if they lose to Detroit. This week, the NFL ended an investigation of tawdry allegations against him, fining him $50,000, with a rebuke for not being candid.

The league said he failed to cooperate with investigators who were trying to determine if Favre sent inappropriate messages and photos to game-day hostess Jenn Sterger in 2008, when both worked for the New York Jets.

Favre led Minnesota to the NFC championship game last year in what statistically might have been his best season. The Vikings then persuaded Favre to come back for one more run, but things deteriorated quickly during a 3-7 start. Favre managed to stay in the lineup for a while, playing despite a broken foot and elbow tendinitis this season, but his streak of regular-season starts finally came to an end at 297.

At that point, it wasn’t clear if Favre could play again. He did manage to return the following week against the Bears, but he didn’t last long, leaving the game after being slammed down to the cold turf and staying motionless for a few seconds.

Joe Webb started against the Eagles and will lead the Vikings again Sunday.

After the Packers grew weary of his indecisiveness about retirement, Favre played a season with the Jets and spent the last two with Minnesota.