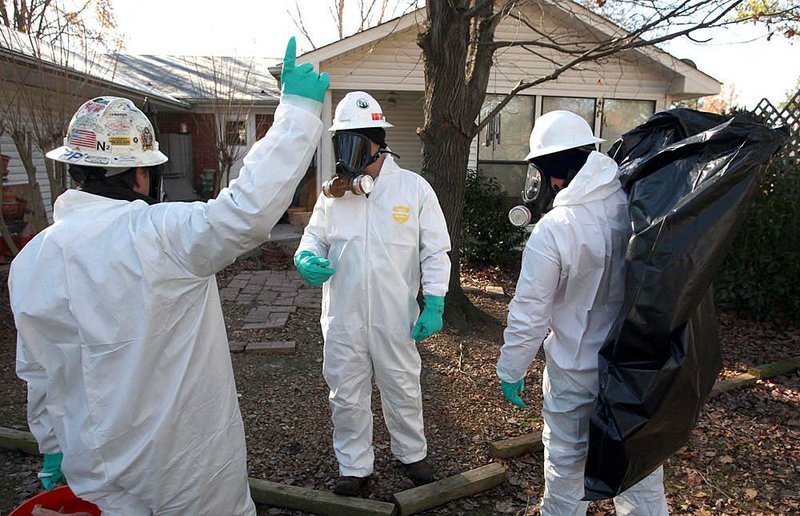 Workers with U.S. Environmental Services LLC don protective gear Sunday as they remove dead birds from the backyard of a home along Leewood Cove in Beebe.

LITTLE ROCK — About 2,000 to 3,000 dead birds that fell from the sky on New Year’s Eve in Beebe were collected after a 10- to 12-hour cleaning effort by U.S. Environmental Services, city workers and residents, Mayor Mike Robertson said.

Starting at 11 p.m. Friday, the Beebe Police Department received several complaints about dead birds falling from the sky, landing on roofs and littering yards for about a mile long stretch between U.S. 367 and the Arkansas State University campus.

Robertson said a cause has not been determined as of Sunday afternoon and that the Arkansas Game and Fish Commission will start sending the collected birds for testing today to the Arkansas Livestock and Poultry Commission laboratory and the National Wildlife Health Center laboratory in Madison, Wis.

Arkansas Game and Fish Commission spokesman Keith Stephens said the test results should be in sometime this week.

“We’re pretty sure it wasn’t any kind of poison or anything like that,” Stephens said. “There’s a lot of signs pointing to either fireworks, people firing them off to celebrate New Year’s, or some sort of weather event.”

Stephens said the commission is leaning toward a stress-induced death from fireworks.

Some weather-related causes that were listed by commission ornithologist Karen Rowe in a news release include lightning or high-altitude hail.

“I believe we’ve collected 99 percent of the birds,” Robertson said. “We’re real pleased with the cleanup effort and how fast we were able to do the cleanup.”

A few city employees and residents also helped, cleaning up their yards and placing the bagged birds on street curbs for service employees to pick up, Robertson said.

About 10 to 15 service employees came dressed in “hazmat suits with breathing apparatus” to collect the birds, which had some residents fearing the worst, Robertson said.

“We don’t believe there was a hazard to humans but when people arrive in these suits you have people worrying, but that’s just company policy,” Robertson said.

Robertson said service employees knocked on doors in the area to ask permission from the owners to clean the yards. If no one was home, only nonfenced areas were cleaned, Robertson said. Though he believes most of the birds have been collected, he believes the city will be receiving calls over the next few days and doing some “touch-up cleaning.”

“If they contact us, we’ll dispose of the birds,” Robertson said.

Robertson said for the past two to three years, birds have come to roost in the area, but the city has never had a problem with them.

Though he’s not sure of an exact number, Robertson said there are “millions” of birds that flock to the area, adding, “I’m telling you, the sky is black.”

Most of the dead birds were red-winged black birds, Robertson said.

Besides finding out what actually caused the deaths, Robertson said the city’s next concern is paying an estimated $9,000 to $12,000 out of the city’s general fund for the cleanup. Robertson said there is an “adequate” amount of money that’s reserved for emergencies in the fund, but did not know the exact amount Sunday.

“The city is paying for the entire cleanup and hopefully we will be able to be compensated from some state aid,” Robertson said.