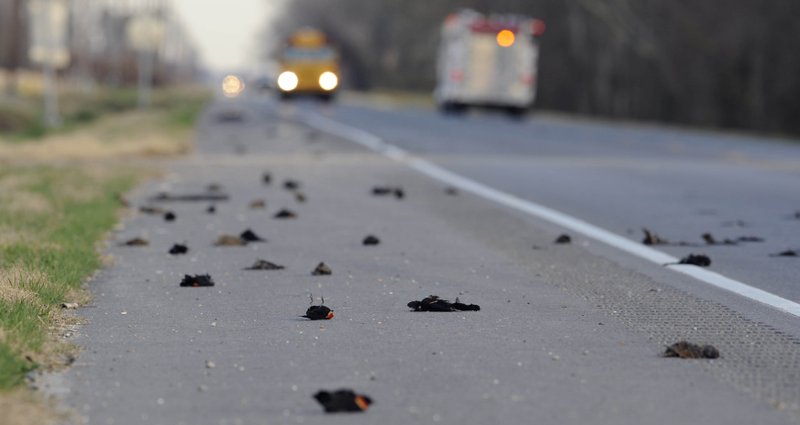 Dead birds are seen along the side of the Morganza Hwy. in Pointe Coupee Parish, La., on Monday, Jan. 3, 2011, about 300 miles south of Beebe, where more than 3,000 blackbirds fell from the sky three days earlier. (The Advocate/AP / Liz Condo )

State biologists are trying to determine what killed an estimated 500 birds that littered a quarter-mile stretch of highway in Pointe Coupee Parish near Baton Rouge.

Louisiana state biologists are sending some of the dead birds to laboratories in Georgia and Wisconsin for testing.

Large numbers of bird deaths are not uncommon.

In January and February 1999, an estimated 3,000 birds died in Morehouse Parish in northern Louisiana, many of them falling from the air. Scientists at the U.S. Geological Service laboratory in Wisconsin diagnosed the cause as an E. coli infection of air sacs in their skulls.

The U.S. Geological Service’s website lists about 90 mass deaths of birds and other wildlife from June through Dec. 12. Five list deaths of at least 1,000 birds and another 12 show at least 500 dead birds.

The largest was near Houston, Minn., where about 4,000 water birds died between Sept. 6 and Nov. 26 from infestations of various parasites.