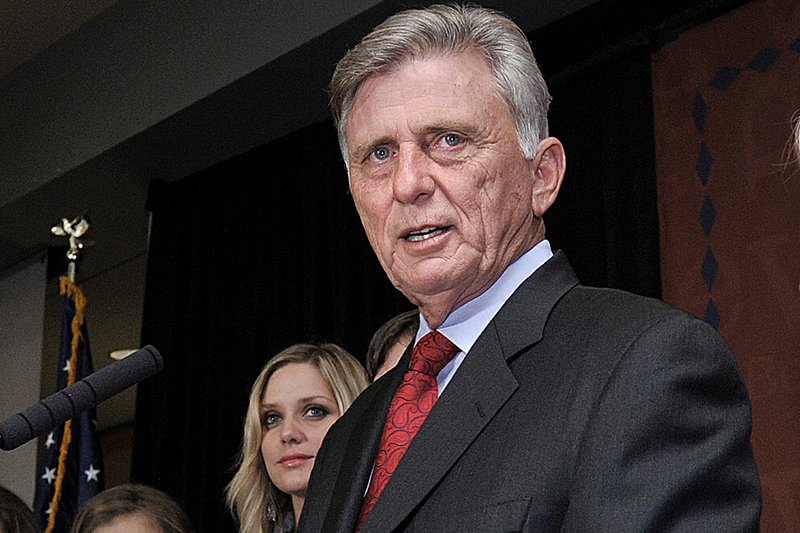 That’ll go a good ways toward helping the party rebound after one of its poorest election showings in ages.

Although Beebe, a Democrat, won a second four-year term atop the state’s executive branch in the 2010 election, Democrats’ ranks slipped from 72 to 53 in the House of Representatives and from 27 to 20 in the Senate as Republicans made large gains.

In addition, the GOP won three of the six executive branch offices that are below the office of governor: lieutenant governor, secretary of state and land commissioner.

It’s the first time the GOP has held that many of those posts since just after the Civil War.

Beebe’s gift was $881,288. It came from his campaign funds, according to his latest report.

Under state law that money could have been given back to the people who contributed it to his campaign.

It also could have been put in Arkansas’ treasury, to the benefit of the state budget ($881,000 is about 30 cents per resident).

State Republican Party chairman Doyle Webb said he was more worried about whether the funds were dispersed at the right time thanwho got the money.

“It certainly is a significant amount of funds,” Webb said.

But how to dispose of the money “is the candidate’s choice,” the GOP official said.

Under state law, candidates have options for what to do with campaign money that’s left after the election. They are not allowed to pocket it.

Arkansas Code Annotated 7-6-203 (h) (1) says that within 30 days after the end of the month in which the election was held, candidates “shall” dispose of surplus campaign funds by turning them over to any of these:

The state treasury for the benefit of the state budget.

A political party or a party caucus of the state Legislature, Senate, or House.

An organization that is tax exempt under Section 501 (c) (3) of the Internal Revenue Code.

The contributors who gave the money to the campaign.

Former Beebe campaign strategist Zac Wright said there was not enough time to return the donations to contributors in the weeks between the election and the day the report was due.

“Just the sheer logistics ... that would be a pretty massive undertaking on the scale of the governor’s race,” Wright said.

Giving the money to the state party “seemed like the most logical [decision] under the circumstance,” he said.

But why not give the money to the state treasury or to another entity that could use the money?

“It just seemed like the most logical decision,” Wright said. “It was the same process that was followed in 2006.”

Candidates who were unopposed may dispose of surplus funds before the election under Arkansas Code Annotated 7-6-203 (h) (2) if they file an affidavit stating they will not solicit any more contributions in the election year.

Beebe had opposition, from the Republican Party (Jim Keet of Little Rock) and the Green Party (Jim Lendall of Mabelvale). Neither Keet nor Lendall had excess funds to contribute to his state party. There also were three write-in opponents.

This is not the first time Beebe has given campaign cash to the party. He transferred $230,000 to it before the 2006 general election and an additional $175,000 in the months after that election.

Wright said contributing to the Democratic Party before the 2010 election was never part of Beebe’s strategy.

This year, state Republican Party Chairman Doyle Webb of Benton, a lawyer, asked the state Ethics Commission what candidates and parties should do with surplus campaign funds.

He said he wasn’t accusing Beebe of breaking the law four years ago.

In September of this year the commission gave Webb its opinion, which said candidates should not transfer money to the party before the election. But the commission also said the law doesn’t fully address the matter.

The governor’s gift to the party is substantial when compared with the party’s total state budget. As of Oct. 15 the party had raised a little over $1.5 million and spent $371,983 on state races.

Among other things, the party budget goes to staff salaries, Democratic organizations, supplies, events and advertising. Party spokesman Mariah Hatta said some of the Beebe gift will go toward paying for events hosted by the Democratic Party for the governor’s inauguration.

Beebe’s report for the 2010 election shows he received $5.07 million in contributions and spent $4.99 million. After the transfer to the party, he had $86,890 left as of Dec. 30. From that, he is allowed to transfer an amount that equals his annual salary (currently $86,890) to a carryover fund, which may be used to pay for what he needs while in office, such as supplies, transportation and sending newsletters to constituents.

If those things are paid for in another way - as they will likely be with Beebe - the money can be used in another campaign.

Keet made no contributions to the Republican Party.

The parties’ final reports for 2010 are due later this month.

Lendall, the Green Party nominee, reported contributions of $200 and repaid himself $451 for a loan, which he said was never spent on the campaign.

Here’s a summary of campaign finance reports in other races:

Unsuccessful Democratic candidate Shane Broadway of Bryant reported total contributions of $569,252 and total expenses of $564,298, leaving a balance of $4,954.

A report for unsuccessful Green Party candidate Rebekah Kennedy of Alma hadn’t been filed as of Tuesday afternoon, according to the secretary of state’s office.

Secretary of State-elect Mark Martin, a Republican from Prairie Grove, reported contributions of $69,379 and expenses of $78,847 and debt of $8,392. Martin said that debt level factored in paying “disputed radio advertising debt” of $7,930 with Clear Channel of San Antonio, and “disputed radio advertising debt” of $3,180with Signal Media of Arkansas Inc. of Little Rock. He said there are disputes with these companies about whether his campaign paid in advance for these ads and he hopes to have the disputes worked out as soon as possible.

Unsuccessful Democratic candidate Pat O’Brien of Jacksonville reported contributions of $278,610, loans from himself of $61,600, and expenses of $340,210. He reported campaign debt of $51,201 in the form of his loans to his campaign.

Unsuccessful Green Party candidate former Rep. Bobby Tullis from Mineral Springs reported loans of $19,457 from himself to his campaign and total expenses of $19,547.

Land Commissioner-elect John Thurston, a Republican from Bigelow, reported contributions of $27,555, loans from himself of $4,945 and expenses of $32,071. He reported a $601 debt to FIA Card Services of Wilmington, Del.