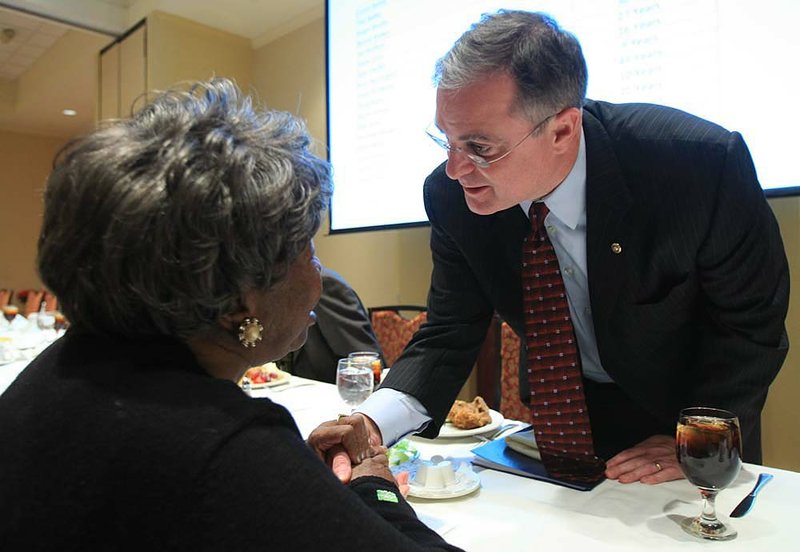 U.S. Sen. Mark Pryor (right) visits with Annie Abrams during a luncheon Tuesday at the Doubletree Hotel in Little Rock. Pryor spoke to the Rotary Club about the need to control federal spending.

The country is at a turning point, he said. If it doesn’t act, China will replace the U.S. as the world’s largest economy.

The Little Rock Democrat avoided saying what concrete steps he favored to rein in entitlement spending. He repeatedly said he liked many of the recommendations released by the National Commission on Fiscal Responsibility and Reform.

That presidentially appointed panel has urged raising the retirement age and lowering cost-of-living increases for retirees.

“This will not be easy and there will be a lot of pain involved,” Pryor told the Little Rock Rotary Club gathered for his lunchtime speech at the Doubletree Hotel.

“China is on the move,” Pryor said. “China is determined to overtake the United States as the world’s largest economy.”

Pryor compared the Chinese economic goals to a meeting he had with Sam Walton, founder of Wal-Mart, about 25 years ago.

At the time, Walton was determined to overtake Sears as the nation’s leading retailer, Pryor said.

After the speech, Pryor told reporters that he would support a two-year moratorium on earmarks - federal spending directed by a member of Congress.

He said he didn’t think Republicans had enough votes in the Senate to repeal President Barack Obama’s health-care law, but did think certain elements would be changed, including scrapping a provision that required extra IRS filings by small businesses.

Pryor, first elected in 2002, praised the Arkansas delegation for downplaying party labels and working together for the state. He said he expected that across-the-aisle camaraderie to continue with newly elected Republicans Sen. John Boozman and U.S. Reps. Rick Crawford, Steve Womack and Tim Griffin.