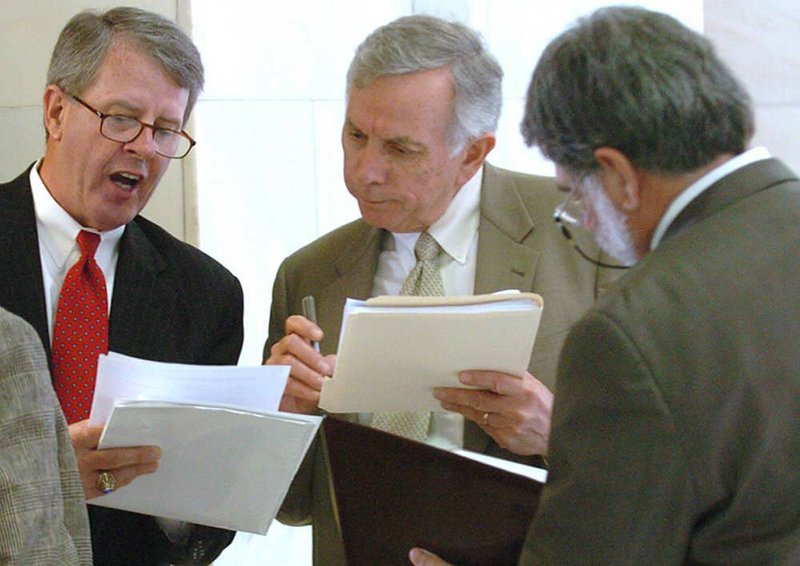 Luke Gordy, with Arkansans for Better Schools, Rich Nagel, AEA executive director, and Dan Marzoni look over SB54, the teacher merit pay bill, in the hall outside the committee room where it was being debated Wednesday.

LITTLE ROCK — Arkansas’ public education system ranks sixth in the nation with a grade of a low B - 81.4 percent - in the annual Quality Counts report, a national report card that tracks policy and performance in six broad categories in the 50 states and Washington, D.C.

Arkansas ranked among the top 10 states in three of the six categories. Those categories covered the states’ efforts to improve the teaching profession, their standards, assessments and accountability systems, and the connections made by the states between their kindergarten through 12th-grade systems and early learning, higher education and the work force.

But Arkansas fell below the national average in the critical category of student achievement in kindergarten through 12th grades, earning a grade of D and a ranking of 36th. The state also fell short of the national average in the chances for success for its residents as the result of access to high quality programs from infancy to adulthood. The state earned a C- in that category and a ranking of 45th in the country.

Maryland, New York and Massachusetts were the top three performing states in the 15th annual report - Quality Counts 2011 - done by Education Week, a national education newspaper. Those top three states were followed by Virginia and Florida.

“We’re proud to be ranked there,” Arkansas Education Commissioner Tom Kimbrell said Monday about the ranking of sixth in the nation, which is an improvement from over the past two years when the state ranked 10th. “Overall, we’re continuing to see improvement in education in policy, reform issues and performance.”

Luke Gordy, executive director of the Arkansans for Education Reform, which is an organization of state business leaders, including the publisher of the Arkansas Democrat-Gazette, that works for improvements in public education, also welcomed the Quality Counts report.

“It’s always good for an outside organization to evaluate what we are doing,” Gordy said. “When I was chairman of the state Board of Education our favorite saying was, ‘Thank God for Mississippi,’ because we were 49th in everything. Thanks to incredible hard work, the educational delivery system has come a long, long way, but that student achievement category is a continuing wake-up call for all of us. We have to do something about that.”

Arkansas earned an A grade and ranked first in the country in terms of the connections it has developed between kindergarten through 12 th-grade education and early childhood education, higher education and workforce education.

“I just really believe it is that communication and that leadership that Gov. [Mike] Beebe is providing with our work force cabinet,” Kimbrell said about the linkage between the public schools and other education institutions. “We have the two education department heads - me and higher education - with [leaders from] work force, career development and economic development all in the same room with science and technology [officials] all talking at least once a month on how to move forward.”

Arkansas ranked second in the country with a B+ for its efforts to improve the teaching profession. And it ranked seventh in the nation with an A grade for standards, assessment and accountability systems.

The teaching category took into account Arkansas’ pilot teacher merit pay program that existed in the 2009-10 school year, the financial and housing incentives in state law for teachers to work in hard-to-staff school districts, state-funded mentoring programs for new teachers, and state-required time set aside for teacher training.

In the category of kindergarten through 12th-grade achievement, Arkansas’ D grade was just below the national average of D+.

The state performance was based on student achievement on the National Assessment of Educational Progress, a test given in math and reading at the fourth and eighth grades. Only 36.3 percent of Arkansas fourth-graders scored at a proficient level in math as did 27 percent of eighth-graders in 2009.

Arkansas’ achievement rating was hindered in part by a slight decline in the high school graduation rate, a fall of 0.3 percent, between 2000 and 2007. Nationally, the rate increased 2 percent.

“When we move to the common core state standards, our state and all the states achieving at a higher level will be teaching under the same set of standards with the same assessment program, and we’ll see some of that achievement gap closing,” Kimbrell said.

“So, we are beginning to address the issue of rigor and the standards of learning, and I hope we will see student performance align with that and we won’t be achieving at the bottom.”

Even more challenging for the state is the Quality Counts’ Chance for Success category, that takes into account family income, parents’ education, and parents’ employment, among other factors. The state ranked among the bottom six of the states and Washington, D.C., inthe category.

“It is a concern,” Kimbrell said about the category. “There is a lot in there that you can’t control in school.”

In 2009, 47.1 percent of children came from families with incomes that were below 200 percent of the poverty level. That ranked Arkansas at 50th in the nation. The state similarly ranked 50th in the nation in 2008 in the number of adults with a two- or four-year college degree.

The Quality Counts report gave Arkansas a grade of a C and a ranking of 27th in the nation in the category of finances for public education.

Within that category, Arkansas ranked 27th in per pupil expenditures adjusted for regional cost differences. Arkansas spent $10,541 per pupil compared with the national average of $11,223.

The Quality Counts report is being released today in Washington.