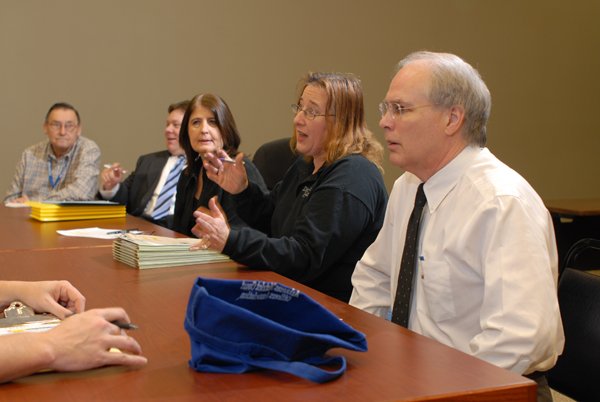 District Court Judge Chaney Taylor Jr. not only heads up that team, but it was his idea to start Arkansas’ first DWI Court almost two years ago.

The court’s participants are habitual drinking-while-driving offenders, and it is not their first time in court. Taylor said he hopes the DWI Court will be an alternative to jail time, offer them encouragement and help with their alcohol and/or drug abuse.

On this particular Wednesday, the first DWI Court participant stepped up to the table that the team members surrounded. “How ya been doing?” Taylor asked in a soft-spoken tone.

After listening to each participant talk about how he or she is doing at work or in college, Taylor asked more personal questions about their spouses and children.

“Is the baby sleeping through the night yet?” Taylor asked in a sympathetic tone.

Several participants are going to college. “I’m going to school, doing homework, a lot of reading and typing,” one participant said. “And I’m going to my meetings.”

A blue canvass bag sat at the end of the table, and after each participant spoke with the team and judge, he would plunge his hand into the bag and pull out a folded snip of paper. Written on each piece of paper is some sort of incentive, ranging from a small gift to applause for doing well in the four-phase, year-long program.

The participants must undergo a substance-abuse assessment to determine the proper level of treatment before they enter the program. There is very little tolerance for missed counseling appointments.

“At first, I didn’t like it at all,” Tad Clausen of Newport said about his visits to DWI Court. “I wanted to go to jail instead.”

Clausen’s fiancee was pregnant with their daughter at the time, and that is the reason he chose to go through the DWI Court instead of to jail.

He is set to graduate from the program on Wednesday, Feb. 23.

“When I got to phase II, it got better,” Clausen said. “[In phase I,] they make you go to 90 meetings in 90 days, and I think going to those meetings helped me more than anything.”

Clausen said he has a job, and he and his fiancee now have a house, a car and an 8-month-old daughter. They are making plans to get married in February.

Taylor saw the need for DWI Court when he would see people with DWI offenses come through his court.

“The vast majority of times, they would go to jail, and I would never see them again unless they got another offense,” Taylor said.

Taylor said he got the idea after he went to a traffic-court seminar in New Orleans in 2008.

“One of the speakers gave a presentation about DWI Court,” Taylor said. “I got back to Arkansas and found out there were none here.”

He said he applied for a training grant from the national Highway Traffic Safety Administration and put together a team, and its members went to California for a week of training.

The DWI Court graduated its first participant on July 28, 2010, and has graduated two more since then.

Clausen said DWI Court has been more effective than the two times he has gone through other drug-rehabilitation treatments.

“I have thoughts about drinking, but it makes me think about what my life was like before the program,” said Clausen, who said methamphetamine was his drug of choice. “I can’t drink alcohol because it leads to drug use, and if I do drugs, I want to drink.”

Clausen said he learned coping skills in the court-required meetings, and he said he doesn’t hang out with the same people he did before going through the program.

“I turned 21 in December, and for the longest time, my plans were to go to a bar and get messed up,” Clausen said. “But instead, I went and ate with my girlfriend and my baby, and we went to her grandma’s.”

Although DWI Court team members make suggestions for treatment or punishment for the participants, Taylor has the last word.

“Independence County has a fairly high rate of DWI traffic accidents,” Taylor said. “This is a very intense program.”

Taylor said there are more DWI Courts in the early stages around Arkansas.