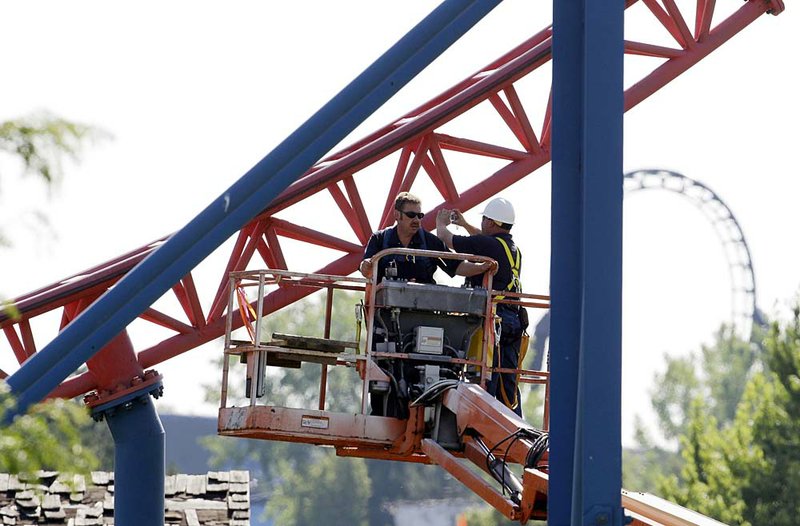 DARIEN, N.Y. — A U.S. Army veteran who lost both legs in Iraq and had been trying to rebuild his life was killed after he was thrown from a roller coaster at an upstate New York amusement park.

Inspectors Saturday were examining the Ride of Steel coaster at the Darien Lake Theme Park Resort, about 30 miles east of Buffalo.

Sgt. James Thomas Hackemer, 29, was ejected from the 208-foot-tall ride early Friday evening, after climbing aboard during an outing with family and friends. Authorities and a park spokesman declined to say at what point in theride the accident occurred.

The wounded veteran was missing all of his left leg and most of his right one, as well as part of a hip, because of a roadside bomb. He had only recently returned for good to his parents’ home in Gowanda after years in and out of rehabilitation at hospitals around the Northeast.

It wasn’t immediately clear whether attendants at the theme park had given any thought to barring Hackemer from the ride because of his missing limbs.

Hackemer was accompanied by a dozen family members, including one of his sisters, Jody Hackemer.

“He was determined to ride every roller coaster,” she said. “That minute he was on that ride, he probably felt the happiest and most normal he’s felt in three and a half years.”

James Hackemer rode the coaster with a college-age nephew, Ashton Luffred. Family members who gathered at the Hackemers’ home Saturday said the young man was too shaken to speak with a reporter.

But Catie Marks, another of Hackemer’s sisters, said Luffred told her that park attendants did not challenge the disabled veteran’s desire to ride the coaster.

People without both legs are barred from at least two other coasters at the park, the Motocoaster and the Predator.

Rules posted on the resort’s website for the Ride of Steel say that guests must be 54 inches or taller, but add that people with “certain body proportions” may not be able to ride. The website also suggests that guests try using a test seat at the coaster’s station house.

Passengers are held in by a bar that sits across their legs.

Theme park officials declined to answer questions about the accident on Saturday, citing the ongoing investigation. Both the state’s labor department, which has regulatory authority over amusement park rides, and investigators from the Genesee County sheriff’s office were on the scene.

“We are all brokenhearted by this tragic accident and will continue our support of both the family and the investigation,” the amusement park’s general manager, Chris Thorpe, said in a statement.

A New York Labor Department spokesman confirmed that the agency is investigating, but said it wouldn’t be releasing additional information yet on the circumstances of the accident.

The roller coaster and surrounding area were closed after the death. Other areas of the park remained open, and patrons arrived again on Saturday morning.

Hackemer was severely wounded in 2008 by an armor penetrating warhead called an explosively formed penetrator. In a video interview with The Buffalo News this year, he described the aftermath of the attack, a hazy period in which he lost tremendous amounts of blood, had two strokes and was in a coma for six weeks at a series of hospitals.

The blood loss caused brain damage. Afterward, he had to relearn to eat and speak.

Jody Hackemer said her brother had recently returned from the Walter Reed Army Medical Center in Washington, D.C., where he was fitted with a new set of prosthetic legs.

She said she did not believe he was wearing the prostheses on the roller coaster.