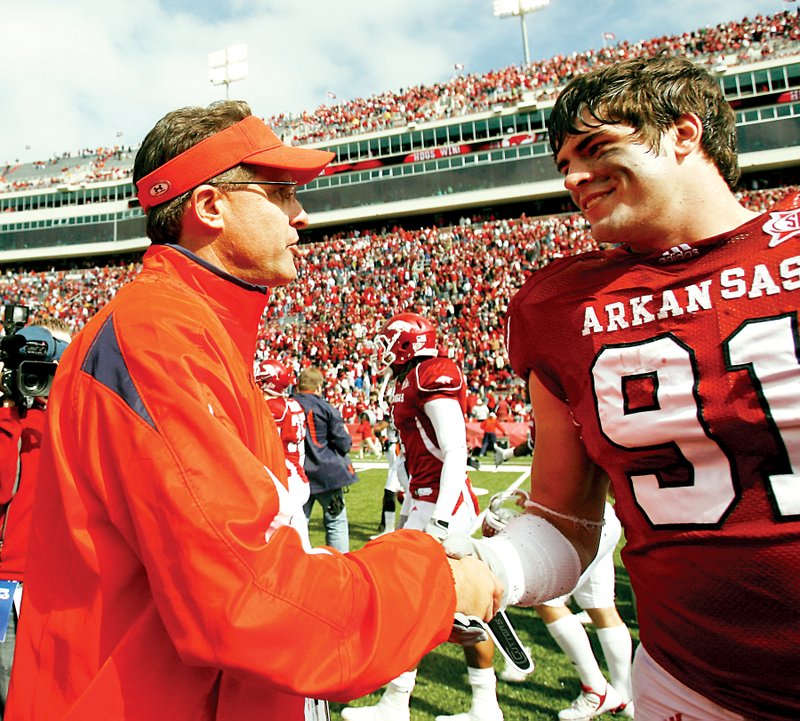 Jake Bequette talks with Auburn offensive coordinator Gus Malzahn after the Razorbacks’ 44-23 win in 2009 at Fayetteville. This season, Bequette will again be key to slowing Malzahn’s high-powered offense when the teams tussle on Oct. 8.

If he weren’t so savagely fast, slow and steady would describe Razorback Jake Bequette almost to a tee.

It’s been that way from the beginning for the meticulous All-SEC defensive end. Since before the beginning, really.

By now, your average Arkansas football fan can just as readily spout the Bequette lineage as most any bloodline lifted from the book of Genesis. George, a Crystal City, Mo., native who played offensive and defensive line for the Hogs in the 1950s, begat Jay and Chris. They, in turn, starred on Arkansas’ offensive line in the '80s. George passed down more than athletic genes; he taught his sons to set goals, parse them into smaller objectives, then get after it.

Razorbacks assistant coach Tim Horton played with Chris Bequette and knows firsthand how the family rolls: “Jay Bequette [Jake’s dad] graduated in three years and went to law school. Chris Bequette graduated in thrxee years and got his law degree. And now here’s Jake. He graduates early and if the university had changed policies he probably would have gone to law schoool, so it’s a family where academics is very, very important.”

Jake Bequette got his finance degree in May 2010. He would have preferred to start law school last fall, but the higher-ups deemed playing SEC football while tackling tort too tough. In the meantime, Jake’s working on a master’s in sports management and enjoying his summer. He spends time with his younger brother Joe, a UA freshman who plans to walk on as a linebacker. They lift weights together, and occasionally join quarterback Tyler Wilson and punter Dylan Breeding on the golf course. “It’s a good time to relax and competitive for all of us,” he said.

He added law school can wait till after pro football and, of course, the upcoming season.

And what a season it’s supposed to be, even after head coach Bobby Petrino dismissed projected starter Anthony Oden from the program last week. For the second time in 13 months, the offensive lineman was arrested on multiple charges, including driving while intoxicated.

“He’s one of our brothers, and that’s a bad situation but we can’t focus on stuff that’s not right in front of us right now,” Jake said. “Any time you lose a teammate it’s not good, but our focus honestly is on the field right now.”

That’s where the best defense of the Petrino era powers Arkansas’ national championshop hopes. Plenty of experience returns, along with new faces who should add depth that’s been missing the last few seasons. As with any great defense, this one must match sound technique with molten desire.

For Jake, this means perfecting methods such as the “swat and swim” that open space through which he can wreak havoc on the offense’s play. “People think defensive line play is brute strength, but it’s really about hand quickness and overall quickness,” he said. “It’s about getting to your technique before the offensive lineman can get to his technique.”

Speed is vital to defensive coordinator Willy Robinson’s schemes, which employ linemen who — with the exception of defensive tackle Robert Thomas — aren’t quite as large as the hulking manimals anchoring LSU, Alabama or Auburn. “We’re very aggressive. We blitz a lot,” Jake said. “We play kind of a wild style” that reflects Robinson’s fiery personality.

How fiery? Jake recalled a Friday night team meeting before the 2008 Texas game in which Robinson, without warning, full-body tackled a graduate assistant “just to kind of get our intensity up.” He added: “We love Coach Robinson and his antics. He’s hilarious ... It was a good form tackle, too. “

As a kid, Jake enjoyed dissecting the technical aspects of the sports he played — soccer, basketball and baseball — with his dad, recalled mom Cindy Bequette. Jake, who grew up in the Heights in Little Rock, didn’t play football until ninth grade when he began Catholic High School.

It wasn’t readily evident he’d one day become the most accomplished player that program has produced in decades, said Catholic head coach David Estes, then the Rockets’ defensive coordinator. Jake was tall, but rangy and couldn’t gain weight easily. So, like his dad taught him, he made a goal, wrote it down and went to work. With two younger boys in the family, also football players, dinner and exercise became important routines at the Bequette household. 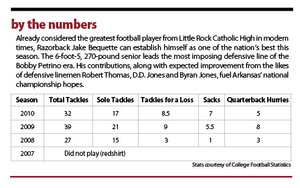 Jake Bequette by the numbers.

“It was pretty mind-boggling the amount of food we would put away,” Cindy said, recalling weekly trips to Sam’s Club, and regular barbecues with up to 30 chicken breasts. After dinner, the teens beelined to an old guesthouse in the backyard, where they blasted music and pumped iron.

By the time Jake was a senior, he was 252 pounds, ran a 4.76 40-yard dash and had developed one of the most devastating first three steps David Estes had ever seen in a high school defensive end.

Coach saw the kind of potential Jake possessed. Three years later the nation would, too.

In 2009, the young, unranked Razorbacks team entered Gainesville, Florida to play the No. 1-ranked Gators in a game broadcast by CBS. The defense focused on corraling Gator quarterback Tim Tebow, a Heisman Trophy winner, and Jake was ready. “I knew I had the ability to be a good player, but I really hadn’t shown it yet,” he recalled. “I hadn’t had a sack in SEC competition.”

That changed in a hurry, as Jake harassed Tebow all game, notching two of the Hogs’ six sacks. Estes watched on TV as the former Rocket stripped Tebow deep in Arkansas territory in the second quarter, allowing the Hogs to keep their 7-0 lead. “The camera panned over to him on the sideline and the words ‘Little Rock Catholic High’ appeared on the screen. We all got goosebumps.”

Arkansas would lose that game, but the next generation of Bequettes won a whole new legion of fans. Estes added: “Jake has meant so much to this program, and the city of Little Rock.”

Want more from the Jake Bequette interview? Go to thesportseer.com.