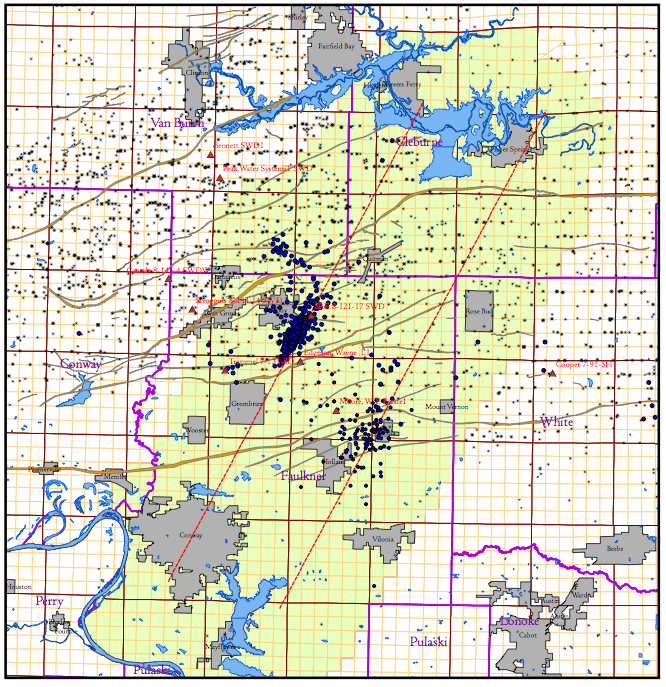 A map provided by the Arkansas Oil and Gas Commission shows in yellow a proposed moratorium area for disposal wells.

EL DORADO — The Arkansas Oil and Gas Commission has voted to shut one natural gas drilling disposal well and to ban others from being drilled in a large swath of central Arkansas where hundreds of small earthquakes have been recorded.

Commissioners voted Wednesday afternoon 6-0 to close a well owned by Deep Six Water Disposal Services between Greenbrier and Enola and then 7-0 to establish a moratorium on future disposal wells in an 1,150-square mile area mostly north of Conway.

The votes came after two days of testimony that centered on whether injection operations could be contributing to seismic activity. The wells are used by natural gas drillers for dumping pressurized wastewater from hydraulic fracturing.

"The decision we made is basically based on the fact that you just can't put the citizens of the state of Arkansas at risk," said Commissioner Mike Davis. He noted that there was not hard scientific evidence confirming the correlation, but said the possible risk was too great.

"This was a decision that I personally made more with my heart than my head."

The commission staff announced last month it was seeking the ban, which at that time would have shuttered four wells. Companies operating three of them agreed before the hearing to plug their wells by Sept. 30, but Deep Six contended its disposal well between Greenbrier and Enola wasn't causing the seismic activity.

The Deep Six vote shuts down the well immediately and orders it plugged, but allows for a delay in the latter if the company appeals.

The moratorium vote establishes the area where no new disposal wells can be drilled. It will then be presented as a general rule, along with additional parameters, at the next commission meeting. Commission director Lawrence Bengal said those parameters might include more rules that would set disposal wells away from known faults and "take into account the potential of wells to induce" quakes before they are issued permitted.

Commissioner Charles Wohlford, who voted for the moratorium and abstained from the Deep Six vote, warned just prior to the action that the moratorium area is seismically active anyway, so drilling needs to be done with caution.

Chairman Chad White said the moratorium area could be enlarged in the future in order to "protect the public" from earthquakes.

Staff of the commission said all four wells may have been contributing to the earthquakes, including a 4.7-magnitude tremor in February that was felt in neighboring states. No serious damage or injuries were reported from it or any of the other small quakes, which number more than 1,000 since September.

Bengal testified Wednesday that the Deep Six well is within the "geologic fabric" of the region, meaning it could contribute to the Guy-Greenbrier earthquakes despite being several miles from the fault.

He added that not all the faults in the area are known, but the patterns within the earth suggest there may be one near the Deep Six well.

"As director, it is not my desire to permit another Guy-Greenbrier swarm to occur," Bengal said. "I have made my recommendation on a proactive effort in the case of Deep Six that that not be allowed to occur."

Haydar Al-Shukri, director of the Arkansas Earthquake Center at the University of Arkansas-Little Rock, testified next, telling an attorney for Deep Six that he designed an "extremely sensitive" array of seismic stations to monitor events within 3 miles of the disposal well. He said more than 95 percent of earthquakes caused by injection wells occur within that distance.

Al-Shukri said his array recorded nearly 10,000 very small seismic events - most of them imperceptible to humans - within about 12 miles of the Deep Six well. But he said only 280 of them were within 3 miles of the well, a strong majority of them occurred higher in the ground than the fluids were being injected and they didn't seem to occur in correlation with the injection activity.

"Because of this, I believe at this point, with this data that there is no correlation" between the seismic activity and the Deep 6 well, Al-Shukri said.

He also disagreed with an estimate made in testimony Monday regarding the size of potential quakes in the region. Steve Horton, a research scientist with the Center for Earthquake Research and Information at the University of Memphis, estimated the fault between Guy and Greenbrier could trigger a damaging, 6.0-magnitude tremor.

But Al-Shukri said that figure is based on tectonic quakes, not ones induced by injection, and assumes the entire fault would rupture at one time.

"This is a very strong assumption," Al-Shukri said.

On Tuesday, the first day of testimony, Horton and a geologist from the Arkansas Geological Survey presented evidence suggesting disposal well operations in the area could trigger a potentially damaging quake.

The seismic activity has been continuing in the region in recent days. Several small tremors were recorded in Conway County last week and a preliminary 2.6-magnitude quake was felt 3 miles east of Guy shortly before 8 a.m. Wednesday. A temporary moratorium on the disposal wells near Guy and Greenbrier has been in place since January as geologists investigated the possible correlation.