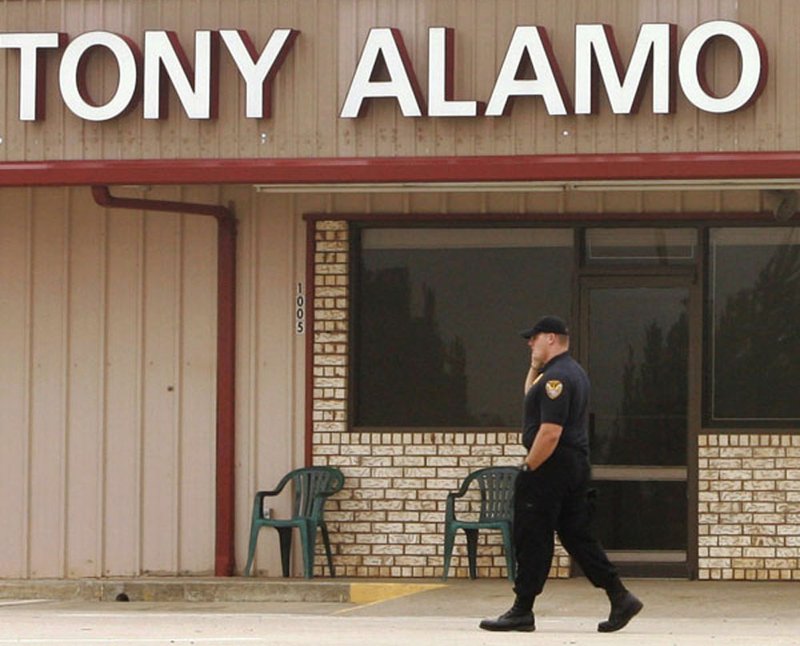 In this Sept. 21, 2008 file photo, a man patrols in front of the Tony Alamo Christian Church in Fouke.

TEXARKANA — After the second time he was beaten at the Tony Alamo Christian Ministries compound in southwest Arkansas, Spencer Ondrisek testified Tuesday, he would stay up late at night, praying and worrying about what might happen to him next. He said he even considered suicide.

“I thought maybe dying would be better than going through something like this,” Ondrisek said.

Ondrisek, now 20, testified Tuesday during the opening day of a trial in federal court in Texarkana over a lawsuit he and fellow former ministry member Seth Calagna, who turned 21 Tuesday, filed against Tony Alamo, the ministry’s imprisoned leader.

Ondrisek and Calagna, who were born into the ministry and fled as teenagers, say Alamo ordered them to be severely beaten on multiple occasions by John Kolbeck, whom authorities have described as Alamo’s “ en-forcer.” Both also say Alamo verbally abused them and as punishment forced them to fast. Testimony in the trial is expected to continue today.

Alamo’s attorney, John Wesley Hall Jr. of Little Rock, said Alamo admits the men were “paddled” and placed on fasts but contends the punishments were not excessive and were in accordance with biblical teachings.

Alamo, 76, was convicted in 2009 of taking five underage girls across state lines for sex in violation of the federal Mann Act and was sentencedto 175 years in prison. He is not expected to be at the trial, but his wife, Sharon, sat at a table in the courtroom with Hall.

In October 2009, Calagna and Ondrisek, who are represented by attorney W. David Carter of Texarkana, Texas, won a $3 million judgment default for their claims against the 6-foot-4, 260-pound Kolbeck.

At the time, Kolbeck was wanted on a second-degree battery warrant in connection with a beating that Calagna said happened at a warehouse in Fort Smith in 2008. Kolbeck died of heart failure at a house near Louisa, Ky., in January at age 51.

Calagna and Ondrisek are seeking unspecified damages in their current lawsuit.

Ondrisek, who lived on ministry property in Fort Smith and Fouke, testified that he was beaten once when he was about 12, once when was about 14 and a third time two or three years later.

Each time, Kolbeck would begin each beating by slapping him in the head more than a dozen times. Then he would hit him in the buttocks more than 20 times with a 3-footlong, 1 1/2-inch-thick paddle. Before the second beating, Alamo introduced Kolbeck by saying “Here’s Johnny,” which Ondrisek said he later learned was an apparent imitation of Jack Nicholson’s character in the 1980 movie The Shining.

He said he also saw Kolbeck beat other members, including Ondrisek’s 12-year-old sister and Calagna’s father, Tony, who was then in his 50s or 60s, in a similar way.

While Kolbeck was beating Tony Calagna, Ondrisek said,the paddle broke, but Kolbeck continued hitting him with the broken end, until the elder Calagna was crying and lying on the ground.

Ondrisek said his father was concerned but didn’t know what to do. His mother told him not to talk about it, he said.

“They think Tony is a prophet,” Ondrisek said.

In addition to being beaten, Ondrisek said he was forced to go without food - once for two days - for falling asleep during “night watch” shifts at the Fouke compound. He described a culture in which members began working in unpaid jobs in the ministry at young ages, were forbidden to leave the property except in pairs and were encouraged to file “reports” of the misbehavior of other members.

After his final beating, Ondrisek said, he was assigned to three months of “diesel therapy” - riding along with an older member to haul goods across the country for a ministry business.

Under questioning by Hall, Ondrisek acknowledged he left the ministry partly because agirl he had been granted permission to spend time with - under the supervision of her parents - left a few months before him. But he said he never reconnected with her after leaving.

Hall also suggested that Ondrisek had been a “bully” and had made prank phone calls to the church since leaving, accusations that Ondrisek denied.

When Hall asked whether ministry members were just following the example of Jesus’ disciples by going out in twos, Ondrisek responded, “I don’t think that’s the only reason” for the rule.

He added, “there’s a lot of things they do that aren’t in the Bible, too.”