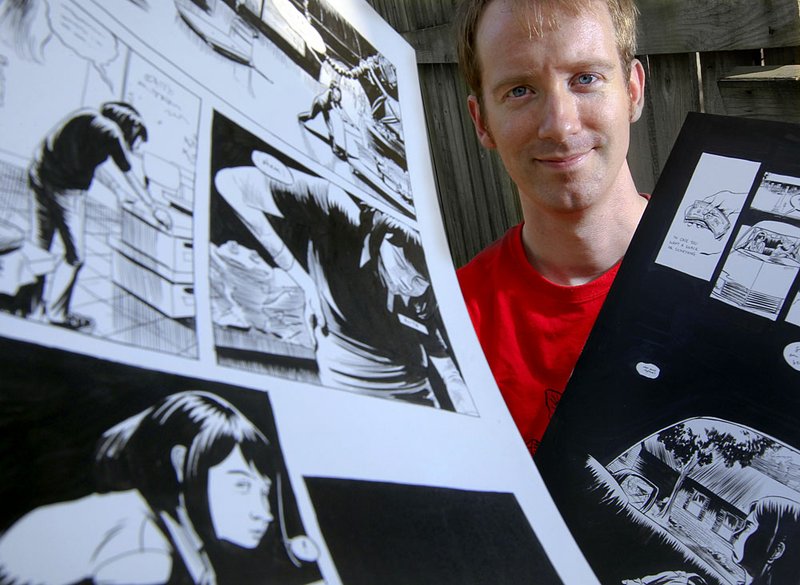 Nate Powell, a Little Rock native who is having success as a comics writer and illustrator. His graphic novel "Swallow me Whole" won the Eisner award, the industry equivalent of an Oscar.

LITTLE ROCK — Nate Powell’s graphic novels are about dreams and enigmas, not superheroes, but the story of Powell’s success packs all the swoosh and surprise of a comic-book adventure:

North Little Rock boy yearns to be a comic-book artist, the story goes. He keeps drawing night after night, year after year, in obscurity.

The more he understands comics, the more he thinks of comics as an art form.

American culture generally disagrees, seeing comics as a childish entertainment about as finely nuanced as a punch to the nose. Like the hero of his childhood, G.I.

Joe, but with a different cause, Powell defends the esoteric.

He experiments with lettering that dissolves like a crowd of voices into white noise. He seeks out the way to trace a line around a delusion.

Finally, he produces a book so intensely heartfelt, so strange - “weird” by his own account - so unlike anything else, he feels a brand-new sense of confidence.

He is certain, that is, nobody will read it.

And with this, he wins one of the biggest awards in the business.

“It still surprises me that people not only read it,” he says, “but have some sort of reaction to it.”

The attention hasn’t made him movie star famous yet. It hasn’t caused him to upgrade his wardrobe of T-shirts that drape loosely on his lean frame. But the effect so far is something even better than glittery.

At age 32, Powell has become what he always wanted to be - a full-time comics artist.

“My pace has tripled thanks to being able to do this full time,” he says, counting 500 pages of comics art, music album covers and other projects finished in a year.

“It’s nice to know it can be done,” Powell says of the prolific accomplishment. “It probably shouldn’t be done.” But the effort means he has two more books due for publication.

Any Empire is due out in July from Top Shelf Productions, and The Silence of Our Friends (written by Mark Long and Jim Demonakos) is scheduled for release in 2012 from First Second Books.

Powell works at home in Bloomington, Ind., returning to Arkansas to visit to family and friends, and for the pizza at his favorite hangout, Vino’s. He is the son of Mike and Betty Brown Powell of North Little Rock, and a graduate of North Little Rock High School.

Growing up, he was a smart boy with a flurry of interests, his mother says. She had to wonder what he would make of himself, especially when his primary enthusiasms turned out to be comic books and - hardly the most practical alternative - DIY (do it yourself) punk rock.

Ties to his home state include Powell’s 15-year association with the North Little Rock-based punk band Soophie Nun Squad, to which he contributed “bass, singing and yelling ... and I jumped around.”

Comics “give me more creative satisfaction,” he says. But in hours alone, drawing, he can’t help but miss the interaction of the now-disbanded group that varied from six to 11 performers onstage.

Soophie, as fans called the touring band, gained an international cult following for its clamor and costumes, even hand puppets.

“It’s nice to build something together,” Powell says.

Powell and the best friend of his teen years, Mike Lierly, turned out their first comic, D.O.A., in 1992, published on a copying machine. They had no better plan than to peddle the less-than-stunning debut at school.

But comics dealer Michael Tierney offered the boys shelf space in his store, Collector’s Edition in North Little Rock. In no time, they were selling ... dozens.

“I always encourage young people who want to do books,” Tierney says, having self-published his own comics. Many kids try, he says, but most of these would-be Stan Lees and wish-it-were Jack Kirbys give up when they realize how much work is involved.

“Nate did the work,” Tierney says. “His [comics] actually sold. In fact, they sold out.”

Powell’s early efforts might have looked like beginner’s work, “but we all go through that phase where we learn to walk,” Tierney says. “And then, Nate learned to run.

“One thing he had going for him - he had a local fan base. People wanted to support him.”

The encouragement was enough to set Powell on a highly independent course with self-published comics that he sold by the hundreds on Soophie Nun Squad’s low-budget tours.

His work gained a wider readership through sales in music stores. Independent comics tend to be minimally drawn, but Powell’s displayed a stylish sense of black-and-white design, honed at the School of Visual Arts in New York. Offset printing replaced the copying machine. Commercial distribution did better than the backpack.

The artist recalls the amazement he felt when his 2000-2002 comic book series, Walkie Talkie, sold in places he’d never been, to people he never met.

His work remained “deeply obscure,” though - hard to find - as described in a review at the time.

“I had more or less written off the possibility of doing comics for a livelihood,” Powell says.

Swallow Me Whole came to him as an idea in a dream.

“As soon as I woke up, I knew there was something in that dream that had to be transcribed,” Powell says.

His notes, instead of the midnight gibberish he expected to find in the morning light, turned out to be the makings of a book.

“I spent the next couple of years trying to shape it into something that would make sense,” starting with a series of thoughts and images, Powell says.

“I’ll compile a list of a dozen scenes,” he says. “The plot emerges from these vignettes.”

The story is about a teenage boy and girl dealing with mental illness, and how they cope with an ever-shifting sense of reality. The girl is fascinated with insects. The boy sees a tiny wizard.

“For me, the book never was about mental illness,” Powell says. “It’s about dignity and sovereignty among these people.”

Powell’s day job at the time was in home care for developmentally disabled adults, some with mental problems.

“I loved it,” he says. “It was a nice, rewarding sense to a day job that I’d never experienced before.”

His background in health care might have informed the way he treats his characters. The death of his beloved grandmother might have shaped the book’s hospital setting. But the story and its sometimes bizarre imagery (a giant frog) come from figments and shadows, nothing autobiographical, Powell says.

“I try not to let [personal life] influence my work at all,” he says.

In the book, the little wizard compels the boy to draw. But Powell never needed a wizard to make him pick up a pencil.

Penciling a comic book page takes him about 20 minutes of loose marks. Inking is the hard part - three hours a page, he figures: pen and brush, real ink.

He is up on computers, cool with electronics, optimistic about new comics made for reading on Apple’s iPad, and he competes in a business in which more and more work is done with graphics software. But he still likes paper, the touch and smell of paper.

Book-to-come Any Empire is Powell’s story about boys and the ideas of violence they glean from movies, games, toys and the American bent toward violent entertainment. He is illustrating The Silence of Our Friends, about civil rights and growing up in Houston, and contributing to Sweet Tooth (Vertigo), artist Jeff Lemire’s comics series of post-apocalyptic strangeness.

Powell is a fan of Marvel Comics’ X-Men, and a chance to draw the adventures of Wolverine, Cyclops, Storm and the rest of the mighty mutants would be, well, sure - marvelous.

But comics are changing so much, taking in so many other kinds of stories, today’s comics artist might find super-plenty to do with never a mask nor a cape.

More readers are accepting comics as a “legitimate art form,” Powell says. “People are interested in comics for so many reasons.

“Comics as literature have entered a new golden age.”