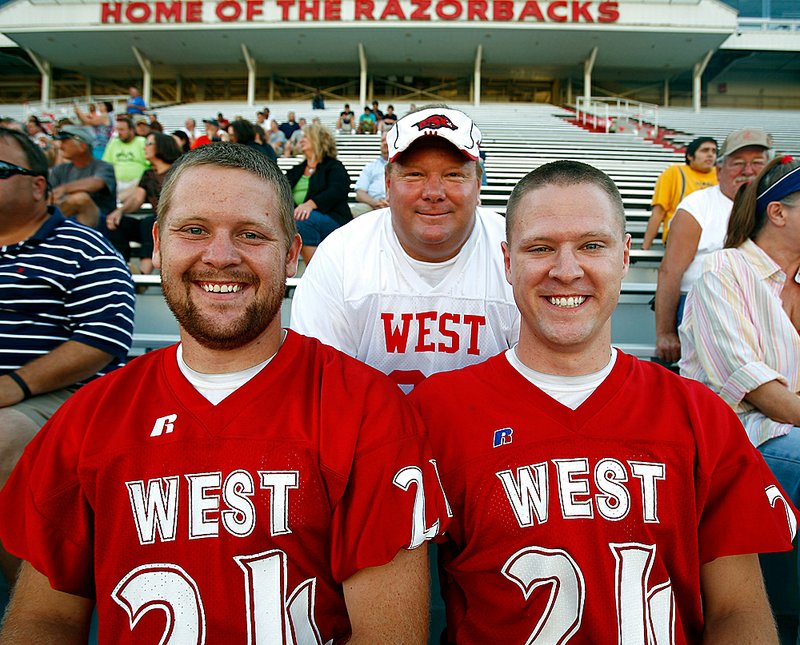 Rusty McDonald (rear) and his sons, Andy (left) and Jeremy, all of Charleston, were in Fayetteville on Thursday to watch Ryan, the fourth member of the family to play in the AHSCA All-Star football game at Reynolds Razorback Stadium.

Charleston’s Ryan Mc-Donald became the fourth family member Thursday to play in the game in the past 24 years. All four have worn No. 24 for the West team.

“Think about that,” said Jeremy McDonald, Ryan’s oldest brother and the second family member to play in the All-Star game. “It’s hard to believe how it worked out.”

Ryan McDonald lost a yard on his only carry on the final play of the game in the West’s 32-3 loss to the East at Reynolds Razorback Stadium, but he said his experience was “a blast.”

The McDonald tradition began with father Rusty, who helped Booneville to its first state championship in 1986 and played for the West All-Stars in the 1987 game.

Jeremy, 24, a graduate student at the University of Arkansas, played in the 2005 game, also representing Booneville. He was named outstanding defensive back in the game, but he’s the only one of the four who didn’t win a state championship during his high school career.

The family then moved to Charleston, where Rusty helps run the family farm and his wife Jennifer is a school librarian.

Middle son Andy, 20, played for the Tigers’ 2005 state championship team, then played in the 2008 All-Star game after concluding his high school career. A kinesiology major and manager for the Arkansas football team, he is the only one of the four to score an All-Star game touchdown.

Ryan McDonald, who signed with Henderson State, began making his mark as a sophomore during Charleston’s run to the 2008 Class 3A title, rushing for 140 yards and a touchdown in a 47-20 victory over Fountain Lake in the championship game. He finished his career as the Tigers’ career rushing leader with more than 3,700 yards.

“There was a lot of pressure on Ryan,” Jennifer McDonald said. “He had to make the All-Star team, then he had to get the No. 24.”

Ryan McDonald said he began looking forward to playing in the game after hearing about Jeremy’s experience.

“My dad didn’t say much about playing in it,” Ryan said. “He doesn’t like to brag.”

Except when it comes to his children.

“I think it says something about the coaches and caliber of teams we all played on,” Rusty McDonald said.

The West had 11 players named to the original All-Star roster who dropped out of the game before All-Star week, including quarterbacks Brandon Allen of Fayetteville and Taylor Reed of El Dorado. The East had to replace three players on the original roster.

“I was going to play,” said McKinney, who had 2 receptions for 26 yards and 1 touchdown. “I wanted to see all the best high school people get together and see where I stand.”

The West had problems holding on to the football, losing 4 of 6 fumbles and throwing 3 interceptions.

The East scored 3 touchdowns and kicked 2 field goals after 5 of the 7 turnovers.

The East’s Earl Byrd of Rivercrest, who had 6 tackles, including 2 sacks for 16 yards of losses, was named Most Valuable Player of the game.

He was one of four East players to win outstanding player honors.

Quarterback Seth Keese of Harding Academy, who threw two touchdown passes and ran for another, was the outstanding offensive player.

Deontae Mitchell of West Memphis, who had an interception, was the outstanding defensive back. His West Memphis teammate Toddra Pamplin was named outstanding offensive lineman.

Chris Smith of Fayetteville was the outstanding special teams player.