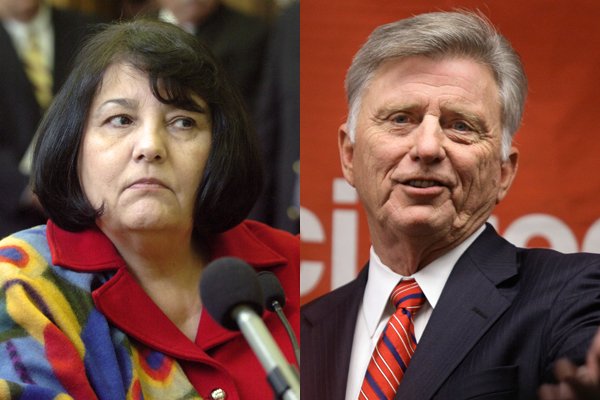 LITTLE ROCK — The governor and lawmakers had a blamefest Thursday, accusing each other of being responsible for a 50 percent cut in aid to some foster parents starting July 1.

Gov. Mike Beebe faulted the $35 million in tax cuts approved during the legislative session, saying lawmakers tampered with his balanced budget without understanding the consequences of what they were doing.

Lawmakers argued that Beebe is to blame because he signed into law the bills that set the state budget and because during the legislative session his Department of Human Services wasn’t clear about where the cuts would occur.

“We got some legislators running around here saying, ‘I can’t believe we are cutting money to foster parents.’ Duh. Duh,” Beebe said. “We told them that everybody except K-12 [public schools] gets cut when you cut more money than what I had proposed in a balanced budget. Those that are acting surprised out there shouldn’t be.”

“For a bill to become a law it has to pass the House, pass the Senate and be signed by the governor. It’s kind of irresponsible for one branch of government to blame the other because we’re all equally responsible,” said Burris of Harrison. “To say that somehow the passage of the tax cuts is what led to this cut is very inaccurate. To say the Legislature did it is inaccurate. We were all part of it, but it wasn’t unilaterally one branch acting on its own.”

Payments to foster parents who house children with emotional and behavioral problems are scheduled to be cut in half to help the Children and Family Services Division in the Department of Human Services stay within its $49.511 million general revenue budget for fiscal 2012.

Department spokesman Amy Webb pointed to multiple causes for the budget situation, including a drop in federal funding of about $3 million and an increase in investigations.

All foster parents receive between $410 and $500 a month for room and board based on the age of the foster children, Webb said. Starting July 1, therapeutic foster parents will receive $205 to $250 a month.

In addition, the state provides $74 each day per child to companies that recruit and train therapeutic foster parents. About $25 to $49 of that ends up with the foster parents, Webb said.

“We did not just single out this program,” Webb said. “We felt like this would not have as significant of an impact as cuts to other areas because these therapeutic foster homes also get that additional funding.”

She said the division is also not filling vacant positions.

About 285 of the more than 4,000 children in Arkansas’ custody are in a therapeutic foster home.

The Division of Children and Family Services’ general revenue budget is $49,511,800this fiscal year and won’t change in the next fiscal year under law enacted by the Legislature, said state budget manager Brandon Sharp.

That’s about $1 million short of the governor’s proposed general revenue budget of $50,571,336 for the division in fiscal 2012. Webb said even the $50.5 million would not have been enough to fill the gap left when federal funding dropped.

The budget cannot be changed without the Legislature returning to session.

Beebe said the tax cuts affected his original budget to the extent that almost every agency received less money and the cut to foster care is how the division chose to deal with it.

“Since K-12 is protected, 100 percent of the cuts go to about 50 percent ... of the monetary budget, because you can’t make any reductions in K-12, so that means human services and prisons, higher education, they end up taking a disproportionate hit when you pass more tax cuts than what the [governor’s] balanced budget called for,” Beebe said.

Burris argued that because the Legislature provided the same amount to the division in fiscal 2012 as in fiscal 2011, there was no cut. He blamed the governor for not filling gaps in the agency’s budget resulting from a drop in federal funds.

Rep. Donna Hutchinson, R-Bella Vista, said she is disappointed in the governor, accusing Beebe of playing “the Scrooge game.”

“This is an approach that many governors and presidents do to signal that they want more funding next time or don’t do tax cuts,” she said. “Beebe may give speeches about caring about the poor or downtrodden, but he doesn’t care about making cuts to them. He is cutting the most innocent, most vulnerable part of our population. He’s a Scrooge.”

Hutchinson threatened to keep the department’s budget from passing during the 2012 fiscal session if the foster care money is not restored. She said cuts could have been made elsewhere in the division.

The tax cuts received broad support in the Legislature, Beebe pointed out when asked about Hutchinson’s statement.

“She is an irresponsible person who votes for all kinds of tax cuts because that’s her mantra, and then blames somebody else because there’s no money. She is absolutely wrong,” Beebe said. “She voted for these extra tax cuts, she and her colleagues pushed these extra tax cuts. I told them people are going to get cut. She is at best disingenuous and at worst, something much, much worse.”

Five of the six tax cuts received unanimous support in the House of Representatives and Senate. The sixth, a sales-tax holiday for school supplies, received two “no” votes.

Rep. Stephanie Malone, R Fort Smith, questioned what the tax cuts actually do to the budget. She said the agency used some federal stimulus money.

“I wouldn’t change my vote. I don’t believe the tax cuts are ultimately what are affecting this,” Malone said. “I think it’s more about basing their money on one-time funds. That right there is a flaw, you just can’t budget on one-time funding.”

Webb said the agency did not expand services with stimulus money; it was just that the federal government paid a greater proportion for services.

Other lawmakers echoed Malone. Sen. Johnny Key, R-Mountain Home, said he would have voted for the tax cuts either way.

He said it is up to the individual agency to decide how to spend the money it is given, and that the division chose to cut money to foster care.

Rep. Efrem Elliott, D-Altheimer, said he would have voted against the tax cuts if he had known foster parents would get less money. Still, he said, the agency didn’t say during the session just where the cuts would happen.

“They didn’t have to use therapeutic foster care as a target. They have some options. They are choosing the one they want to use,” Elliott said.

A co-chairman of the Legislature’s Budget Committee, Sen. Gilbert Baker of Conway, said, “Nobody is to blame. The tax cuts are surely notto blame.”

Beebe could use the state’s rainy day fund to restore the foster parents’ payments, Baker said.

Beebe said there isn’t anything he can do at this point.

Burris said Beebe had his own priorities for spending it.

“If the governor was serious about funding this program, he could do it,” Burris said. “But it seems he may be more interested in a political headline ... and that’s what’s frustrating.”

Other commitments include about $2 million to the Miscellaneous Agencies Fund to meet small agencies’ needs that can’t be met any other way and as a “precaution to meet [a] severance tax obligation” to help fix roads and bridges damaged by natural gas extraction and $360,000 to the Division of Children and Family Services for “intensive family services,” according to state officials.

Division Director Cecile Blucker said Wednesday that the division chose not to cut the family services because it costs less to keep families together than it does to remove children from their homes.

Tennille said that moving money from another area of the department’s budget would leave “another gaping hole.”