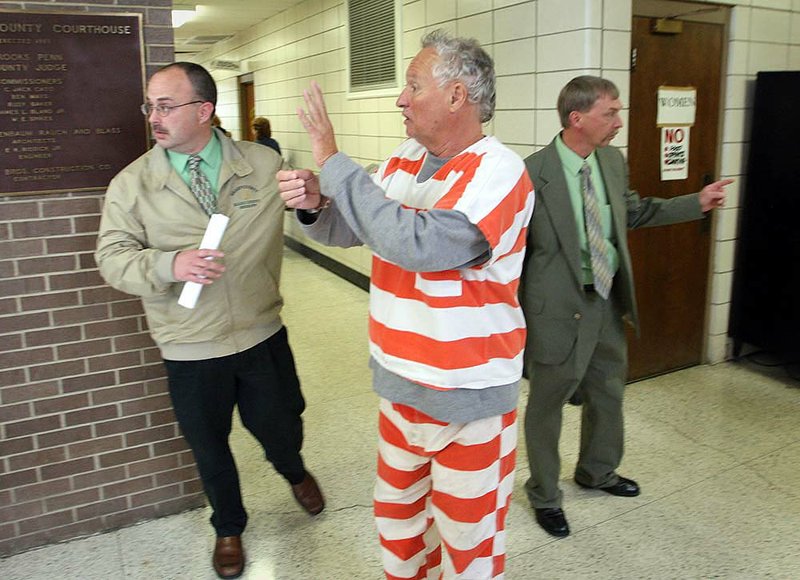 Sharp County Sheriff Mark Counts escorts Wayne Watkins out of a courtroom Monday after a bail hearing at the Lawrence County Courthouse in Walnut Ridge.

On Monday morning, Circuit Judge Harold Erwin set Watkins’ bail at $106,910, with the stipulation that it must be paid in full and in cash. Erwin set the bail at a hearing in Walnut Ridge at the Lawrence County Courthouse.

Watkins walked into the courtroom in handcuffs, his gray hair unkempt. Wearing an orange-and-white striped jail jumper and plastic, orange flip-flops over white socks, Watkins appeared uneasy on his feet and had a slight tremor.

“Mr. Watkins knew he was in trouble,” Prosecuting Attorney Henry Boyce said during the hearing. “He wanted to get out of trouble, but he didn’t want to come home and face his troubles.”

District Judge Mark Johnson had set Watkins’ bail Thursday at the same amount but gave Watkins the option of posting a court bond equal to 10 percent of the amount.

However, Sharp County Sheriff Mark Counts refused to accept a payment of $10,691 offered by Watkins’ relatives about an hour after Johnson’s ruling.

“I think if things don’t go his way, he’ll go back to Mexico.”

Watkins’ attorney, Larry Kissee, filed a petition Friday to hold Counts in contempt for refusing to accept the money. Kissee is the Sharp County attorney in addition to representing Watkins.

“He alleges the same things he alleged to Judge Johnson on Thursday morning,” Kissee complained. “We think that’s judge shopping.”

Boyce pointed out that Kissee is in the “unusual position” of asking for “his own sheriff” to be held in contempt.

Watkins will next appear in the Sharp County Courthouse in Ash Flat at a hearing set for March 16.

Watkins was arrested Feb. 21 on a 2007 theft by deception warrant when he re-entered the country on a plane landing in Houston.

Watkins’ cousin, Virgil Griffin, testified Monday that Watkins returned to the United States because his father, who lives in Jonesboro, is gravely ill.

Watkins moved to Mexico in April 2007 to help care for his ill mother, Griffin said.

Griffin said he doesn’t know why Watkins remained in Mexico after his mother died in 2009, although Griffin said Watkins had periodically called him.

After Monday’s hearing, Griffin said he doesn’t have enough money to post bail.

In addition to the Class B felony theft by deception charge, the 62-year-old Watkins faces a lawsuit filed by Arkansas’ attorney general.

Attorney General Dustin McDaniel filed the suit against Watkins, Griffin and other business partners in 2008, accusing them of “unconscionable” behavior that violated the Arkansas Deceptive Trade Practices Act.

Steve Carpenter, a lifelong friend of Watkins, said setting a high bail to keep Watkins in jailis merely a means of “humiliating the man.”

Asking the judge for $2.5 million in bail was “ludicrous,” Carpenter said.

Like Watkins’ attorney, Carpenter insisted that Watkins did not flee to Mexico.

“He went there before any of this happened because his mother was dying of cancer,” he said.

“He’s been trying to get back, but he was afraid.”

Carpenter said Watkins did more for the town of Hardy and Sharp County than he has done harm to the community.

“Hardy has almost died since the Spring River Beach Club has been gone,” he said. “He’s a good man.”

“He gave lower-income people the ability to buy some land,” Carpenter said, defending his friend. “He’s done nothing to deserve this.”

An unknown number of buyers lost their money and their land after several banks foreclosed on Watkins when he defaulted on $2.6 million in loans he purportedly obtained by using the land as collateral.

More than 50 purported victims, most of whom live out of state, have contacted the attorney general’s office to file complaints against Watkins.