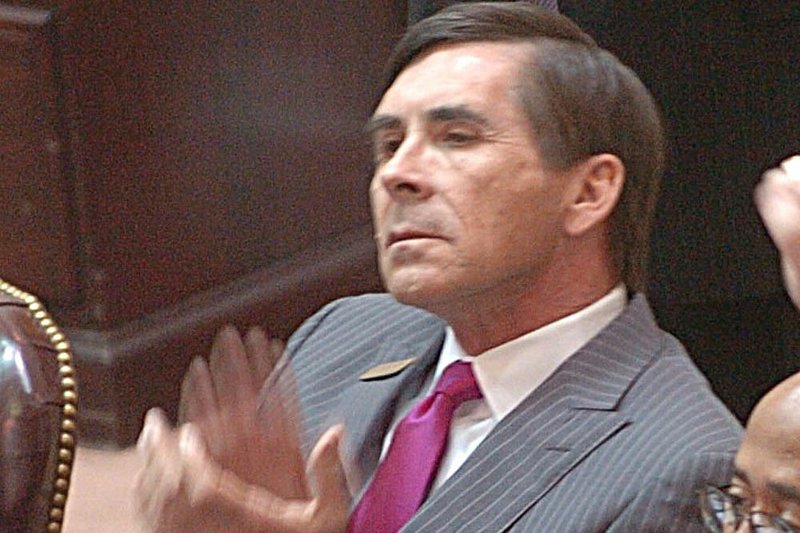 State Rep. Denny Altes reacts Tuesday after his bill aimed at authorizing a course of academic study of the Bible was recommended by the House Education Committee.

LITTLE ROCK — A legislative committee gave its OK on Tuesday to a bill to set in motion the development of standards for how to teach a class on the Bible in the public schools of Arkansas, which has a history of enacting laws to advance religious doctrines in public schools.

At least twice in the past such Arkansas laws have been challenged in court, andthe state lost both times.

The sponsor of the bill said it is intended to keep the state out of court by laying out standards for how the class is to be taught.

The head of the Arkansas chapter of the American Civil Liberties Union, which successfully sued the state in the two past cases, said the bill will legitimize those who inappropriately teach religion in government-funded public schools.

The House Education Committee approved House Bill 1032 by Rep. Denny Altes, R-Fort Smith, which would allow the state Board of Education to develop standards for an “academic study” of the Bible as an elective course in the schools, “taught in an objective and nondevotional manner” without “religious doctrine or sectarian interpretation” and to “not disparage or encourage a commitment to a set of religious beliefs.”

The bill refers to the Bible but does not propose the same sort of instruction in the writings that are the basis of other religions, such as the Koran is for Muslims and the Torah is for Jews.

The Cabot School District currently offers a course on the Bible, according to Department of Education spokesman Seth Blomeley. Districts must have department approval to teach a Bible course, he said.

He said the Little Rock School District let its approval expire and has resubmitted a request for approval.

The Gravette district recently submitted a request for the first time.

Altes, a Baptist, said the bill requires the department to use nationally recognized standards in building a curriculum to ensure schools use the Bible as a reference and not just teach a religion.

Schools are not required to offer the Bible course.

“The curriculum that they approve will set guidelines or a structure so there won’t be lawsuits. So they won’t be teaching religion,” Altes said after the committee met. “It should be taught. The Bible is the oldest, most accurate, most popular history book on the face of the Earth. So why can’t we teach that in school?”

But ACLU of Arkansas Executive Director Rita Sklar said the bill gives schools the green light to teach about the Bible in a religious way.

“On its face it’s not unconstitutional,” Sklar said. “If they followed it word for word, line by line ... and taught the Bible academically, it would be fine. But in a public-school setting I think it would be very difficult to teach it properly, and very tempting to teach it with religion.”

Sklar said she has a degree in religious studies.

She said schools across the state teach creation in science classes instead of teaching evolution and if passed, Altes’ bill would open the door for more religious instruction in public school.

“We have creation science being taught in schools all over Arkansas and evolution not being taught. That’s the way it is and they just wait until they get caught,” Sklar said after the meeting. “If some people can’t teach science without teaching religion, how are they going to teach a Bible course without religion? It’s just opening the door wide open for litigation.”

The past cases in Arkansas included one that stemmed from Gov. Frank White’s decision to approve a Legislature-passed passed bill in 1981 which mandated the equal treatment of creation science in classrooms where evolution was taught.

A lawsuit (McLean v. Arkansas Board of Education)was filed challenging the law, and in 1982 federal Judge William Overton of Little Rock ruled that it violated the Establishment Clause of the U.S. Constitution, which prohibits government from making laws to establish religion. The state didn’t appeal the decision.

In the 1967 case known as Epperson v. Arkansas, the U.S.Supreme Court struck down a 1928 state law that prohibited the teaching of human evolution. The court also used the Establishment Clause to strike down the law, which had been enacted by voters in a statewide election. The state argued that voters had the right to decide what’s taught in public schools.

Gov. Mike Beebe said he could not comment on Altes’ bill because he has not read it.

The House of Representatives approved a bill Tuesday to create an online checkbook the public can use to track state government spending.

Opponents of the bill said it expands government spending at a time when some lawmakers have refused to approve appropriations that include spending increases.

The bill would require the state Department of Finance and Administration to create a website with more information about state government spending, an idea supported by Lt. Gov. Mark Darr during his campaign last year.

The House sponsor, Rep. James McLean, D-Batesville, said the website would “serve as a check against wasteful spending” as citizens view how their taxes are spent.

“They want the window opened, they want to see, they want access, they want information and quite frankly they want to know how their money is being spent, in a very accessible and easy way,” McLean said.

Colleges and universities won’t be included because their accounting systems are different from the one used elsewhere in state government. They get 18 percent of general revenue.

Estimates for converting the institutions to the state system are as high as $10 million.

The website is expected to cost $600,000 the first year to set up and hire two employees to staff it. The state would bear an estimated ongoing cost of $225,000 a year.

The House voted 64-22 to approve the creation of a database aimed at tracking abuse of prescription drugs. SB345 by Sen. Percy Malone, D-Arkadelphia, would require the state Board of Health to create a prescription-drug monitoring program, after the Department of Health obtains “adequate funding.”

The bill was presented in the House by Rep. Tim Summers, R-Bentonville, who runs a drug and alcohol recovery center.

The only people with access to the information will be pharmacists and law enforcement with a subpoena.

Altes said the states around Arkansas have such a database and drug users come to Arkansas to obtain drugs.

He has sponsored a similar bill in the past.

A bill to require 15 percent of the state’s tobacco prevention and cessation program funds to be diverted for drug courts or other substance abuse and prevention activities failed to clear a Senate committee.

A motion to recommend approval of SB794 by Sen. Bill Pritchard, R-Elkins, fell a vote short of the five required to advance from the Public Health, Welfare and Labor Committee.

The director of the state Department of Health, executive director of the Arkansas Tobacco Settlement Commission, and the state’s surgeon general testified against the bill, saying it would hurt a successful program that has reduced smoking in the state.

The legislation would reduce the program’s funding by about $2.2 million, he said.

The program is responsible for reducing the number of tobacco users by more than 104,000 since 2003, Black said, and the program’s budget has been cut by 30 percent this fiscal year.

Joe Thompson, the surgeon general, said about two-thirds of Arkansans approved an initiated act in 2000 to spend tobacco-settlement proceeds on several programs.

“It would be disservice to the citizens to redirect this money away from programs that are very valuable and doing good work to another program that may have value, but it’s not the intention of the people in the initiated act,” he said.

The Senate approved 28-0 a bill to require any entity providing health insurance in the state to establish and administer an open-enrollment period to offer a child-only plan to each qualified individual.

The period would start this Oct. 1 and run to Oct. 31 each year under HB1428 by Rep. Donna Hutchinson, R-Bella Vista.

According to the bill, there exists a limited market in the state of health insurers voluntarily offering individual health-insurance policies for people under 19 years old.

The bill goes back to the House to consider a Senate amendment.

The Senate unanimously approved SB330 by Sen. Jimmy Jeffress, D-Crossett, which would change the deadline for the House and Senate Education Committees to file reports on their findings and recommendations regarding educational adequacy.

It would extend the Sept. 1 deadline to Nov. 1 of the year before the convening of a regular legislative session.

Jeffress said extending the deadline would give the Bureau of Legislative Research more time to evaluate information from the state Department of Education about the public schools.

The bill goes to the House for further consideration.

Under existing law, before a editor, reporter or writer for a newspaper, periodical or radio station; a publisher of a newspaper or periodical; or a manager or owner of a radio station “shall be required to disclose to any grand jury or to any other authority the source of information used as the basis for any article he or she may have written, published or broadcast, it must be shown that the article was written, published or broadcast in bad faith, with malice and not in the interest of the public welfare.”

The bill goes to the House for further consideration.