It may feature high-tech weapons, but Battle: Los Angeles is actually an old-fashioned war movie. by Philip Martin | March 11, 2011 at 4:07 a.m. 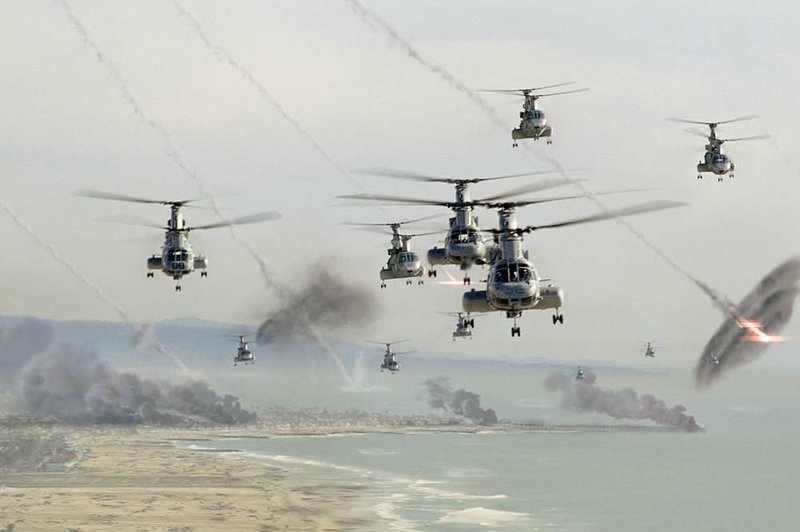 LITTLE ROCK — Battle: Los Angeles is one of those movies that I admittedly don’t get, a kind of cross between what I imagine the first person shooter video game experience to be and an episode of the HBO series Generation Kill. I suppose if one was the sort who got offended by the movies, one might be offended by the way the film valorizes death in combat, but the truth is I wasn’t offended, just mildly bored by the whole thing.

I was bored because I’d seen the movie before, sometimes with John Wayne in the role that’s played by Aaron Eckhart here. Battle: Los Angeles, for all its computer-generated explosions and high-tech weaponry, is a very old-fashioned war movie about a small band of U.S. Marines (and an Air Force technical sergeant,played by Michelle Rodriguez) on a mission. It’s very straightforward, with no subtle political messages and no implied critique of the efficacy of war as a problem-solving tactic. And even though the Marines and the civilians they’re sent to save are an ethnically diverse bunch, I get the feeling the filmmakers castit that way not out of some politically correct impulse but so we could actually differentiate between the soldiers in full battle gear. This is simple martial fantasy, about shooting beings that are not us.

And our war is just because our planet has been invaded by alien creatures who, scientists suspect, mean to siphon off all our water after they exterminate us. They do not come in peace, and only a naive child would suggest that maybe we could simply ask them what they want and maybe make friends with them. (So naturally there’s a point in the movie when a naive child is introduced.Fortunately he shapes up pretty quickly into a good little Marine.)

Some wars are necessary, you bunch of hippies, and no war is more justified than when an advanced civilization presumably from light years away decides to go all Noah Cross on Planet Earth. So “Retreat, hell!” (Come to think of it, Battle: Los Angeles seems to borrow not only the catchphrase, but a plot point from Retreat, Hell!, the 1952 Joseph H. Lewis Korean war drama with one of my favorite poster taglines of all time: “... Then a bunch of husky guys with star-spangled spunk took over!”)

I can see why you might think that I didn’t like Battle: Los Angeles. But the truth is a little more complicated. I think that I might actually like Battle: Los Angeles if I were to watch it a couple of times, because I suspect that what I perceived as cliches were actually embedded allusions to old war movies. (I’m writing this review immediately after driving to the office from the screening. I haven’t quite digested the movie yet. But deadlines are what they are, and I’ve miles to go before I sleep.)

On the other hand, I’m not really inclined to view Battle: Los Angeles a second time, unless someone comes up with a drinking game to go along with the film. (Every time Eckhart’s baby blues lock meaningfully with another character’s, we have to shoot a jigger of tequila.) Still, I really don’t hate it, and I can even see how after District 9, Independence Day, Restrepo and2012 it was an inevitable movie. Someone was going to make this (or something exactly like it), and so I’m a little relieved that the people who did make it classed it up with some decent actors. I’m relieved that they got through it in a little less than two hours.

But mostly I’m relieved that, when the aliens come to get us in August, regular grade gasoline will be selling for $2.969 a gallon in Los Angeles.