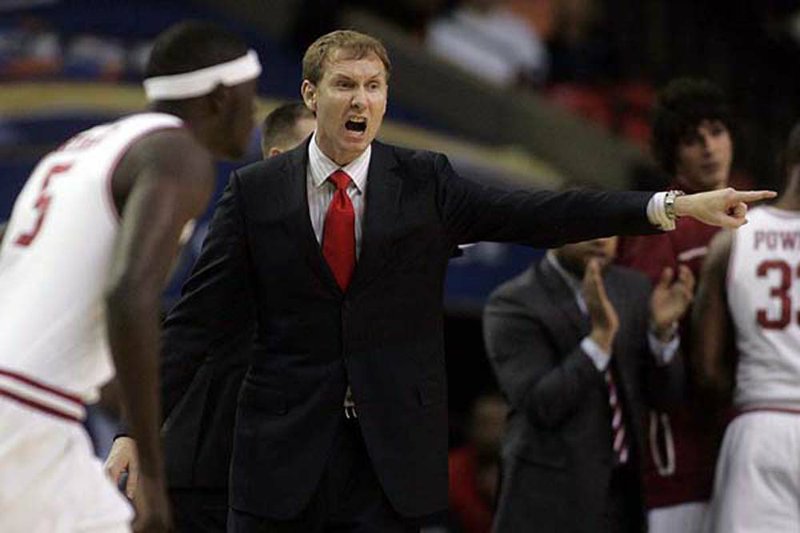 Arkansas Democrat-Gazette/WILLIAM MOORE Arkansas head coach John Pelphrey talks to his team during a game against Tennessee Thursday, March 10, 2011 at the Georgia Dome in Atlanta, GA.

FAYETTEVILLE — John Pelphrey was fired as the head basketball coach at Arkansas on Sunday, ending a rocky four-year career at the school.

Pelphrey learned of his fate during an end of the season meeting with Arkansas athletics director Jeff Long Sunday morning. Long will hold a press conference tonight but released a statement on the firing.

“After a thorough and comprehensive evaluation of our men’s basketball program, including an assessment of the overall student-athlete experience within our program, it is clear that we have not made the progress over the last four years that is necessary to return Razorback Basketball to a place of national relevance.” Long said. “As a program, our initial goals are to challenge for Southeastern Conference championships, compete in the NCAA Tournament and support our student-athletes in the pursuit of a degree. Our program’s tradition demonstrates those goals are certainly attainable at the University of Arkansas.

“The University of Arkansas has a proud tradition in basketball including playing in one of college basketball’s best arenas, Bud Walton Arena, and in front of the nation’s most passionate fans. It is because of this passion that we seek to elevate our program on and off the court.”

Though the exact number isn’t given in his employment contract, Pelphrey’s buyout is believed to be in the neighborhood of $1.8 million to be paid out over three years. The 42-year-old Pelphrey stood to make up to $1.75 million next season with incentives. His current contract ran through the 2014 season.

Pelphrey finished his time at Arkansas with a 69-59 record, including a 27-43 record against teams from the Southeastern Conference. The Razorbacks failed to reach the NCAA Tournament three consecutive years and will learn tonight whether they will be accepted to the 32-team National Invitation Tournament.

Arkansas is 18-13, but has lost three consecutive games, including a 74-68 defeat to the hands of Tennessee Thursday in the first round of the SEC Tournament in Atlanta. The Razorbacks haven’t made the postseason since advancing to the second round of the NCAA Tournament during Pelphrey’s first season in 2008.

Arkansas finished 23-12 during Pelphrey’s first season and began the next year 12-1 with wins over top 10 foes Oklahoma and Texas in the same week. At that time several fans were asking for the coach to be locked into a long-term deal, but things quickly went downhill.

The Razorbacks lost 15 of their final 17 games in Pelphrey’s second year at the helm and finished 14-18 during his third season, losing six straight games to end the year.

While losses on the court mounted, Pelphrey’s career was marred by disciplinary issues for his players off of it. At least 15 Arkansas players were suspended during Pelphrey’s tenure, with several players opting to end their playing career with the Razorbacks by either transferring or opting for professional basketball overseas.

Additionally, attendance at Bud Walton Arena has plummeted in the last few seasons, with a record-low paid attendance average of 12,022 fans per game this season.

Arkansas’ basketball team did improve its Academic Progress Rate under Pelphrey’s watch from a 755 during his first full year at the school to a 933 during his second year, which was the last reporting period. Schools that routinely fall below the 925 benchmark in the APR risk probation and scholarship reductions.

With his firing, Pelphrey won’t be able to coach one of the most heralded signing classes in school history. Arkansas inked five seniors last November in a class that is ranked in the top five nationally by most recruiting services.

Arkansas’ top target to replace Pelphrey is expected to be Missouri coach Mike Anderson, who spent 17 years with the Razorbacks as an assistant coach for Nolan Richardson. Anderson is in his fifth season with the Tigers, who are expected to be in the NCAA Tournament field when it is announced later today.